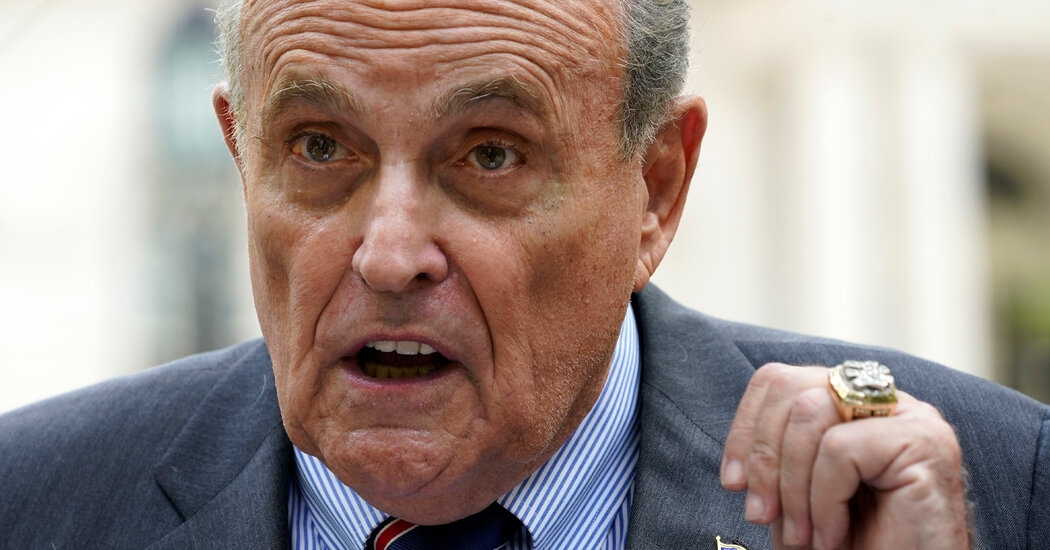 (Want to get this newsletter in your inbox? Here’s the sign-up.)

Good evening. I’m Matthew Cullen and I’ll be your Evening Briefing writer for the next several months. Here’s the latest at the end of Monday.

Prosecutors informed Giuliani — Trump’s former lawyer — days before he is scheduled to appear before the special grand jury in Atlanta. Such a move typically means that prosecutors believe an indictment of Giuliani is possible, though not guaranteed. A federal judge also rejected efforts by another key Trump ally, Senator Lindsey Graham, to avoid giving testimony.

3. Kenya declared a winner in its presidential election. But the validity of the results remains in question.

The head of Kenya’s electoral commission announced that William Ruto, the country’s vice president, won with 50.5 percent of the vote. But the result was thrown into doubt because of a statement from a majority of the election commissioners, who said they could not take ownership of the results because of the “opaque nature” of the election’s handling.

The disputed announcement leaves the race between Ruto and Raila Odinga, a veteran opposition leader, on shaky ground. The election is being closely scrutinized as a key test of democracy in one of Africa’s powerhouse nations.

4. Britain authorized a Covid vaccine for both the original variant and Omicron, becoming the first country to do so.

Half of each dose of the Moderna-made vaccine will target the original variant, and the other will target Omicron. In clinical trials, the vaccine generated a good immune response to these two variants, as well as the BA. 4 and BA. 5 subvariants in adults.

In the U.S., the Biden administration plans to begin a Covid booster campaign next month with updated vaccines from Pfizer and Moderna targeting new variants.

In other virus news, the federal government was not using established systems for orders of the monkeypox vaccine, slowing immunizations.

5. An Afghan family moved to New Mexico for a new life. Now one relative is charged with killing fellow Muslims.

Muhammad Syed and his family resettled in Albuquerque five years ago. But troubles began: He kicked his wife out of the car when she was learning how to drive; he slashed a woman’s tires outside a mosque; and he threatened to kill a man who became romantically involved with his daughter.

Now Syed, a Sunni Muslim, has been identified as the leading suspect in a string of murders of four men — three of them Shiites. Authorities also said that Syed’s son purchased weapons with his father and may have helped him surveil one victim.

6. Today marks the first anniversary of the fall of Kabul.

In the year since the Taliban officially seized control over Afghanistan’s capital, essentially completing its revival nearly 20 years after Americans invaded, most of the U.S.-financed reforms have been reversed and the country has seemed to hurtle backward in time.

The Taliban have curtailed women’s rights, restricted journalists and erased vestiges of the American-led nation-building effort. For many Afghans — particularly women living in cities — the sense of loss has been devastating.

Many of the Americans who served and worked in the country feel helpless after dedicating much of their life to a two-decade mission that feels unfinished. For Afghan employees from the Kabul bureau of The Times, their new lives in the U.S. are challenging but full of opportunities.

7. Employers are increasingly tracking their workers and assigning them productivity scores.

Eight of the 10 largest private U.S. employers now track the productivity metrics of individual workers, many in real time, according to an examination by The Times. Ubiquitous in lower-paying jobs, the monitoring practice is spreading in the white-collar world.

Employers say that the practice is valuable. But in interviews and in hundreds of written submissions, workers described being tracked as “humiliating” and “toxic,” and said the new monitoring systems are inept at capturing offline activity and unreliable at assessing hard-to-quantify tasks.

Related: We asked people who quit their jobs during the “Great Resignation” how it changed how they approach work.

In other business news, Adam Neumann, the founder of WeWork, has a new real estate venture — and big backing from the firm Andreessen Horowitz. And gig work is thriving despite low unemployment.

This fall, the Supreme Court will consider whether Warhol violated the law by basing a portrait of the musician Prince on a different photographer’s work.

In a 1984 series commissioned by Vanity Fair, Warhol altered, cropped and colored a photograph taken by Lynn Goldsmith. Works in that series have since sold for six figures, and Vanity Fair paid Warhol’s foundation to use one for a commemorative Prince issue. Goldsmith received no money beyond a $400 license fee, to use her photo in connection with a single issue.

Lawyers for Warhol’s foundation have argued that his art is protected under the fair-use doctrine. The justices may then have no choice but to opine about the meaning of a portrait of Prince.

Santiago Espinal, a second baseman for the Toronto Blue Jays, said he sees his glove as a member of his family and sleeps with it on his night stand. Seattle Mariners third baseman Eugenio Suárez talks to his glove during games and never places it on the ground.

Even among the less cautious players, it is seen as a major taboo to put a hand in someone else’s glove. “I just don’t want people stretching it out,” Dansby Swanson, Atlanta’s shortstop said.

10. And finally, an invasive species has helped save Australia’s crocodiles.

The feral pig arrived in Australia in the late 18th century and has spread across close to 40 percent of the country’s land mass, destroying local ecosystems. Recently, however, scientists have concluded that the pigs have also played a crucial role as crocodile food.

Close to extinction in the early 1970s, the saltwater crocodile now has an estimated population of 100,000. Scientists credit much of the rebound to the pigs, which are now the crocodiles’ primary food source.

“A pig coming down to the water’s edge is like ringing the dinner bell,” said one scientist.

Have a wild night.

Actors In Jim Carrey Movies You May Not Know Are Dead