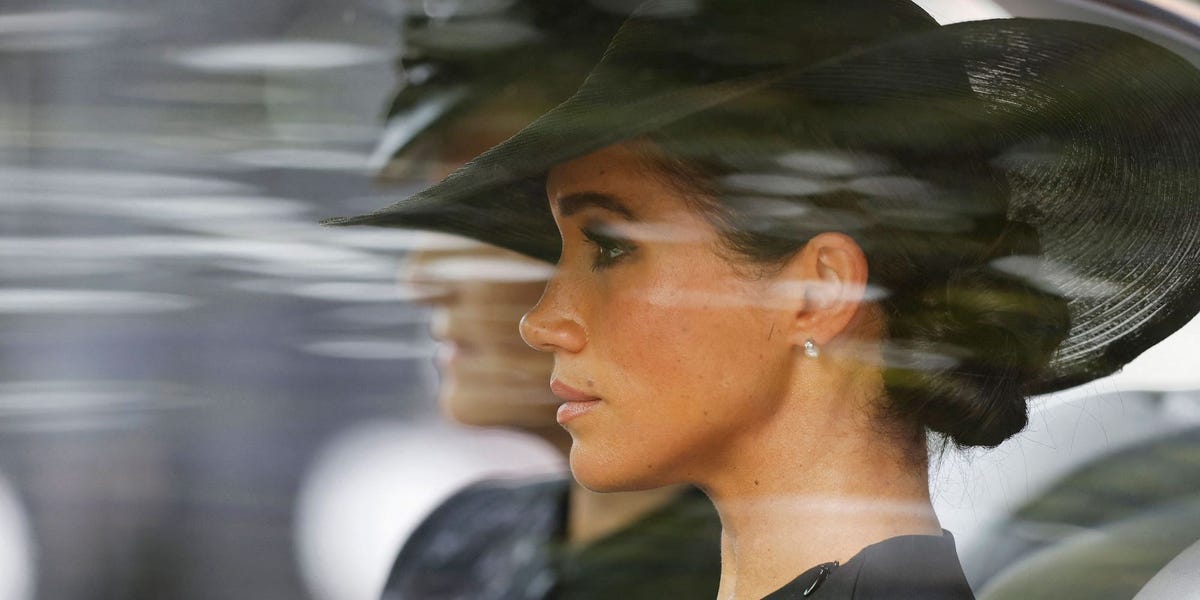 As news of the Queen’s death has drawn Meghan Markle and Prince Harry back to Westminster Abbey, where they were married in May 2018 — so too has their presence revived misinformation and conspiracies targeting Meghan Markle.

Conspiracies about Meghan wearing a microphone for an upcoming Netflix special, being purposefully blocked by a candle in funeral broadcasts, and copying Princess Diana’s outfits (aided by old imagery) have circulated on social media.

As can be the case with engagement-driven platforms like Twitter and TikTok, relatively few accounts can make a disproportionately huge impact.

Conspiracy one: Meghan Markle copied her funeral attire from one of Princess Diana’s outfits

A TikTok viewed 22.7 million times implied that Meghan copied an outfit of Princess Diana’s for the Queen’s funeral. In it, a slideshow of the royal family, dressed in black, plays under the text “everyone else at the Queen’s funeral:” and cuts to “Meghan showing up dressing as Diana:” on top of photos of Meghan and Diana in strikingly similar outfits.

But as some commenters pointed out, the TikTok was posted before the Queen’s funeral took place and used images from Remembrance Day in 2019. But, TikTok’s algorithm complicates a time-based fact check. Its mysterious For You Page isn’t chronological, meaning many users were served the video after the funeral without realizing that it was posted before the event occurred.

By design, time barely exists on TikTok — time stamps aren’t shown in the FYP scroll — you must go to a creator’s profile page to find out when a TikTok was made. That leads to plenty of confusion over timelines. Ultimately, fact-checking dates on the app requires an effort many of us don’t regularly exert.

Conspiracy two: The royal family conspired to purposefully block Meghan Markle during the live broadcast with a candle

On Twitter and TikTok, a conspiracy about the royal family purposefully blocking Meghan’s face with a candle during the funeral broadcast has circulated — alternatively discussed by fans of Meghan who decry the perceived snub and trolls who express finding it funny and justified. However, the TikToks featuring this perceived slight only show a few seconds of footage from the live-streamed event, which was streamed by major news outlets such as the BBC.

“When I watched the funeral live I noticed that you couldn’t see Meghan at the Committal Ceremony with her face obstructed,” one Twitter user wrote. “Remember Royal Family plans & executes out every single detail with precision. That candle didn’t need to be there and that camera angle was no accident.”

“Thanks so much, candle, you knew the assignment,” wrote another TikTok user.

Conspiracy three: Meghan Markle was wearing a microphone for her upcoming Netflix show

Dozens of TikTok and Twitter users speculated that creases in Meghan’s black dress indicated that she was wearing a microphone to record for a rumored Netflix reality TV show while paying tribute to the Queen. Videos discussing the conspiracy have garnered millions of views on the platform.

One Twitter user wrote, “Is Meghan Markle wearing a mic to use the Queen’s death for her Netflix reality show?” Angela Levin, the author of the Camilla Parker Bowles biography “Camilla, Duchess of Cornwall,” was called out during a Talk TV broadcast for retweeting a now-deleted tweet calling Meghan a “spy.”

Meghan became a fixation for trolls and a British tabloid mainstay, and faced a barrage of racist and sexist online harassment once her relationship with Prince Harry became public in 2016. Four years after going public, the couple stunned Britons by announcing that they would “step back as ‘senior members” of the British royal family in 2020, decamping to the US.

In the fall of 2020, Meghan described the abuse as “almost unsurvivable” in an appearance on the mental health podcast “Teenager Therapy.” A year later, in 2021, formal vindication came when Meghan won a lawsuit against “The Mail on Sunday” tabloid, and a Twitter analytics service found that Meghan and Harry were, in fact, targeted with coordinated harassment that year. The platform found that 70% of the hate content directed at the couple came from 83 Twitter accounts.

The couple quit social media in 2021 because of the harassment, though the now California-based Meghan recently teased a return to Instagram in an August 2022 interview with The Cut.

“We should avoid buying into the idea that social media is the ultimate modern-day public square and that any attempt to ask platforms to be accountable to the landscape they’ve created is an attack or restriction of speech,” Prince Harry told Fast Company in 2021. “I think it’s a false choice to say you have to pick between free speech or a more compassionate and trustworthy digital world. They are not mutually exclusive.”