U.N. Race Panel Sounds the Alarm on Abortion Access in the U.S. 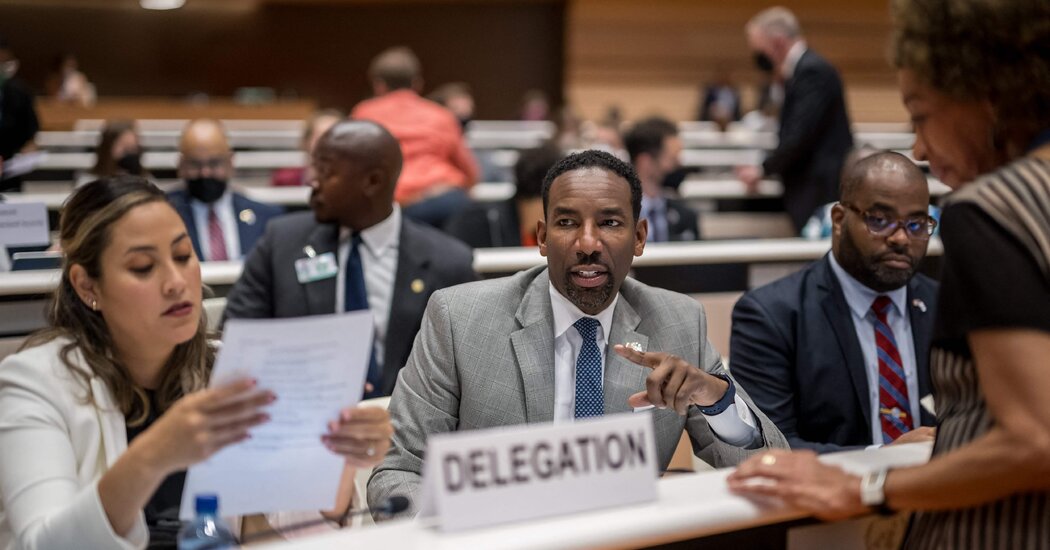 GENEVA — An influential United Nations panel that examined the state of race relations in the United States called on the Biden administration on Tuesday to address a host of concerns, including imperiled abortion access for minorities, curbs on voting rights and the country’s “increasingly militarized approach” to immigration.

The 18 experts on the Committee on the Elimination of Racial Discrimination delivered their findings after a two-day hearing in Geneva. A 24-member delegation of American officials participated in the hearing this month, including the mayor of Atlanta and representatives of multiple federal and state agencies.

The committee, known as C.E.R.D., was one of the first international bodies to sound the alarm globally on China’s treatment of Uyghurs and other minorities in its Xinjiang region. This month, it highlighted the fraught issue of vanishing abortion access in the United States. It urged the Biden administration to safeguard access for ethnic and racial minorities and low-income people — groups that it said would be disproportionately hit by the Supreme Court’s ruling overturning Roe v. Wade.

It called on the federal authorities to mitigate the risk of criminal prosecution of women who seek abortions and the clinics that provide them.

The White House did not immediately comment on the report by the panel, which said it expected the United States to respond to its findings within one year. But Linda Thomas-Greenfield, the U.S. ambassador to the United Nations, in June called the Roe ruling “a cruel, dark, and dangerous decision.”

An evolving landscape. Women’s access to abortion continues to be debated around the globe. Here’s a look at the state of affairs in some countries:

Mexico. In 2021, Mexico’s Supreme Court issued a historic decision that decriminalized abortion. The move set a legal precedent for the nation, but applying it to all of Mexico’s states will be a long path, and several challenges remain.

Poland. The country is one of the few that has moved to restrict abortion in recent years. A near-total ban went into effect in January 2021, fueling discontent among those who believe human freedoms are being eroded under the increasingly autocratic Law and Justice Party.

China. The country’s central government said last September that it intended to reduce the prevalence of “medically unnecessary” abortions. In recent years, China has been focusing its efforts toward promoting childbirth and slowing the population’s aging.

Thailand. The Thai Parliament voted in 2021 to make abortion legal in the first trimester, while keeping penalties in place for women who undergo it later in their pregnancies. Advocates say the measure doesn’t go far enough.

In her statement, she added: “As President Biden said, the fight is not over. Let me be clear: The Biden administration remains committed to protecting and advancing the rights of women and girls around the world, including at the U.N. and in our foreign assistance.”

The panel praised the executive order on advancing racial equity that Mr. Biden signed as one of his first acts after taking office. And it said it found the members of the U.S. delegation that had attended the hearing — drawn from the Environmental Protection Agency and State, Justice, Labor and Education Departments, along with other agencies — willing to listen.

The experts singled out police brutality and the use of excessive or deadly force against minorities, as well as what they described the continuing impunity of the police and border customs agents for alleged abuses, as issues of concern. They also flagged racial profiling, racial issues in schools and the impact of environmental pollution on Indigenous people and minorities.

On the issue of slavery, committee members urged the Biden administration to address demands for reparations. Civil rights groups participating in the panel’s review presented reparations as the defining racial issue of the era — a litmus test of Mr. Biden’s commitment to advancing racial justice.

The committee’s “strong conclusions” provided a blueprint for government action, Jamil Dakwar, director of the American Civil Liberties Union’s Human Rights Program, said in a statement. Mr. Biden doesn’t have to wait for Congress to combat racial discrimination, he said.

Mr. Biden has expressed support for proposals to set up a commission to study reparations for slavery, but in its exchanges with the committee, administration officials did not commit to action on the issue.

Panel members indicated that should change.

“The tensions between those who owe reparations and those who are owed reparations — the present impasse between them is untenable,” Prof. Verene Shepherd, a Jamaican academic who is chairwoman of the U.N. committee, said after presenting the panel’s findings.

The committee said that when the United States responds to the findings, among the other issues it hopes will be addressed is the high level of gun violence disproportionately affecting African Americans and other minorities. The panel called for legislation to expand background checks for all private firearm transfers and for the prohibition against carrying concealed handguns in public.

The panel also said it wanted to hear what action the federal authorities were taking to follow up on slain or missing Indigenous people, calling for intensified efforts to fight violence against American Indian and Alaska Native women.

And it expressed concern about the sometimes brutal treatment of undocumented migrants crossing the U.S. border from Mexico, the long periods of mandatory immigration detention and deportations without access to legal redress.