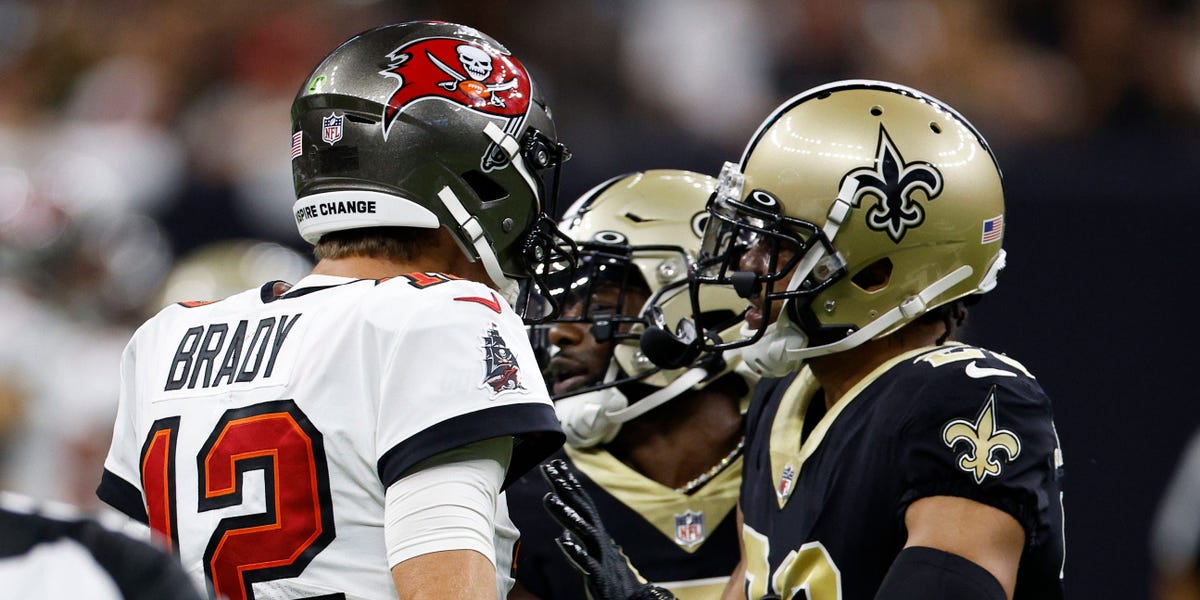 Tensions boiled over briefly during Sunday’s game between the Tampa Bay Buccaneers and New Orleans Saints, resulting in two ejections.

With the game still tied 3-3 early in the fourth quarter, Saints cornerback Marshon Lattimore had some words for Buccaneers quarterback Tom Brady. Running back Leonard Fournette stepped up to defend Brady, exchanged shoves with Lattimore, and a small brawl broke out.

Buccaneers wide receiver Mike Evans, who has a history with Lattimore, rushed in to defend his teammates. When the dust settled, both Evans and Lattimore were ejected.

As the two sides were separated, Evans could be seen speaking with one of the officials. Reading his lips, he appeared to say, “That’s Tom Brady. What do you want me to do?”

Still, Evans would leave the game, and afterwards receive a one-game suspension from the NFL.

On his podcast “Let’s Go!” Brady thanked his teammate for having his back, and chided the NFL for suspending Evans.

“Mike and Marshon, they’ve had their own battles over the years. I think sometimes our emotions get the best of us,” Brady said.

“I love Mike and the fact that Mike would come out there to defend me means everything in the world to me as a teammate and a friend. Mike knows how I feel about him.

“In the end emotions are a part of sports. Sometimes they boil over, obviously they did yesterday,” Brady continued. “It’s an unfortunate circumstance. I don’t think it deserved any type of suspension. I think that’s ridiculous. Hopefully we can move past it, get to a better place. In the end, I appreciate Mike having my back. I know he’ll learn from it. And he knows that we all have his back.”

Brady argued that the fracas was the result of a series of events throughout the game, and it was unfair to pin the harshest punishment on Evans.

Evans appealed his suspension to the NFL on Wednesday, with a ruling expected some time on Thursday.

Should Evans’ suspension be upheld, the Buccaneers could be severely short-handed at receiver for next week’s game against the Packers, as Russell Gage, Julio Jones and Breshad Perriman all entered Sunday’s game as questionable.

The Buccaneers appear to have already started on their contingency plan, signing veteran receiver Cole Beasley earlier this week.

Should Tampa Bay continue to need reinforcements later in the year, Brady was caught having a friendly conversation with Odell Beckham Jr. on the sidelines ahead of Sunday’s game.