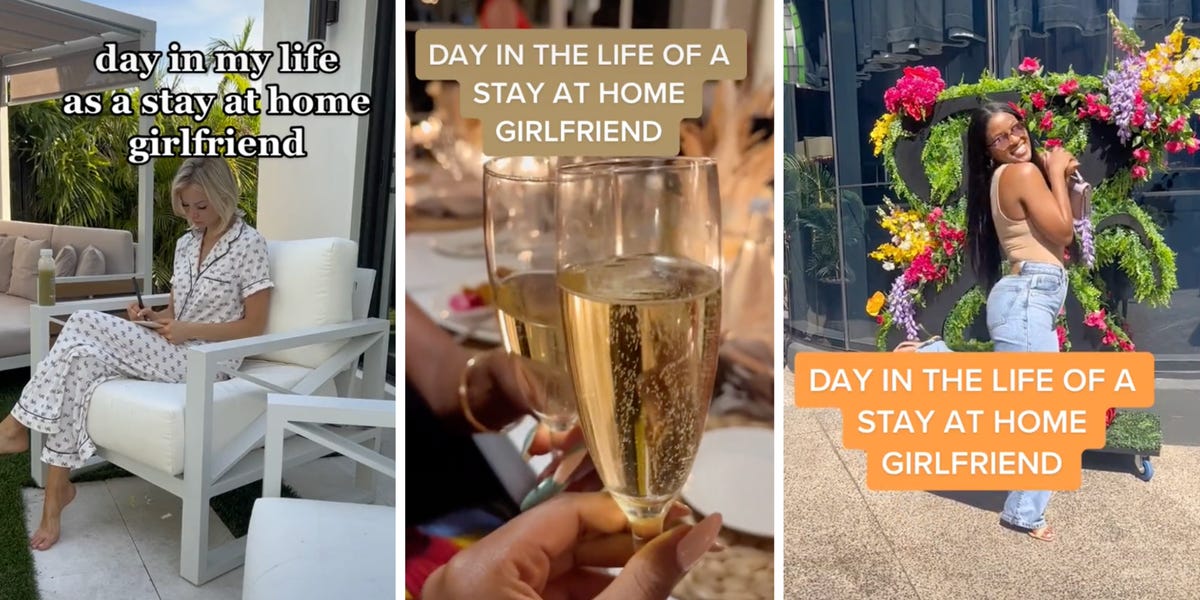 Like countless other lifestyle influencers, Kendel Kay shared her morning routine with her TikTok followers, posting a vlog-style video about it on August 16.

Kay’s routine was not too dissimilar to many aesthetic “day in my life” videos seen all over TikTok, with the influencer making juice, performing a 20-minute skincare routine, and getting dressed for a workout with her boyfriend.

In the caption, Kay described herself as a “25-year-old stay-at-home girlfriend.”

While Kay’s boyfriend did not feature in the video, the influencer, who is based in Puerto Rico, filmed herself performing tasks for him while he worked — fetching water and making coffee and smoothie bowls. Kay told Insider her boyfriend is Luke Lintz, the founder of a multi-million dollar PR company, according to the International Business Times.

Kay’s video blew up and became her most-watched TikTok, with 8.6 million views, but the comments under the post were overwhelmingly negative, criticizing Kay for being an “an unemployed person who does everything for Luke,” with another person asking why her boyfriend couldn’t “make his own latte.”

Kay is one of many women on TikTok who have been posting about being a “stay-at-home girlfriend” in the past year. The emerging term is typically interpreted as describing a woman who does not work and relies on the income of her partner. It’s rapidly growing in visibility — the hashtag #stayathomegirlfriend has 109 million TikTok views.

But it’s also controversial, with people arguing that the concept reinforces traditional gender roles. TikTokers who identify as stay-at-home girlfriends told Insider they think criticism of the lifestyle is based on stereotypes and misconceptions, and argue that their videos are intended to counteract expectations of women, rather than reinforce them.

The discourse highlights a subtle change in how young women view feminism today.

Kay told Insider she thinks commenters who criticized her for performing activities like journaling and self-care in the video assume the stay-at-home girlfriend lifestyle consists of nothing but glamour and relaxation.

“I think people have this stereotypical view and assumption about what my daily life is like. They think that I literally just do nonsense all day,” Kay told Insider.

Many women stitched and duetted Kay’s video, inferring her life was entirely funded by her boyfriend, and criticizing her as a result. Others implied her lifestyle was privileged and frivolous compared to their own.

While Kay said her video about her morning routine was more like a “highlight reel” of the lifestyle, the reality of her day-to-day life involves producing content across YouTube, Instagram, and TikTok, which takes time and effort. “It’s like they think the content gets produced magically and I don’t do any work,” said Kay.

Zoë Rae is a 29-year-old TikToker and stay-at-home girlfriend based in Johannesburg, South Africa. She told Insider she regularly receives comments asking what she does all day while at home, but said these remarks are largely steeped in old-fashioned ideas about what “staying at home” really means.

Rae told Insider she runs a small events company and often spends her days replying to emails and working from home, while also looking after her household.

“I think people’s mindsets are very black and white. They either think women are mooching off their boyfriends or working full time and having 95 side hustles. I think I operate in a gray area where I am a stay-at-home girlfriend, but I still have my own business,” she said.

According to Kay, the label “stay-at-home girlfriend” might imply to people that these women do not earn any money of their own, in the same way that people think about “stay-at-home moms” or “housewives,” who also go viral on TikTok for sharing their life experiences.

However, Kay explained that the stay-at-home girlfriend is more like a “precursor” to a stay-at-home mom, since there are no children to look after. Her lifestyle involves caring for her boyfriend and household, with her boyfriend earning most of the household income, but she also has time to pursue content creation.

Several people who duetted Kay’s video said they thought women should not rely on a partner’s income unless they are married, as it could lead to potential financial instability were they to separate. Even a divorce lawyer weighed in, saying the lifestyle makes women “vulnerable” as they would have no “job experience” or “career” if they were to break up with their partner.

Kay and Rae both told Insider they maintain some financial independence from their partners with their respective content creation and remote working and ventures. While they both said these projects do not make enough to sustain their lifestyles, they allow them to at least keep some money aside.

Rae told Insider that she is prepared for the eventuality of her relationship ending, viewing her business as a “safety net” that she would be able to put more hours into if needed. Even if she were to get married to her partner, she said she is aware of the risks of financial abuse and does not promote complete financial dependence on a spouse. “You should always have your own money as a woman, and even when my partner and I get married, we’re going to have a prenup. Everything is going to be set to protect me,” she said.

Kay echoed this sentiment, saying she believes viewers assume she doesn’t have her own income. “I wouldn’t enter a situation like this if I didn’t have like my own money because I do think it is very risky to just give up your whole life to the financial power of somebody else,” she said.

Gillian McGuire, a 25-year-old TikToker from New York, makes darkly satirical videos parodying “day in my life as a stay-at-home girlfriend” content, playing a character who has been locked in her house by her boyfriend. She told Insider she was inspired by Kay’s viral video and became “intrigued” by the lifestyle.

Having seen the criticism that genuine stay-at-home girlfriend videos receive, she understands why people have an immediate reaction to the idea of a woman being fully financially dependent on someone else.

“I think it makes sense with being married to someone, as you choose to split responsibilities in certain ways, but when it’s just a partnership, and both parties are young, I think there are more questions. Like what happens when they break up?” she said.

That said, she doesn’t echo other aspects of the criticism and told Insider she respects any woman’s choice to be a stay-at-home-girlfriend.

Much of the criticism levied at stay-at-home girlfriends has labeled the lifestyle anti-feminist. It follows what some argue is a resurgence of regressive values and rejection of feminism among young women, similar to the #TradWife movement, which idealized the concept of a “1950s housewife” and received fierce backlash. More recently, a satirical TikTok that appeared to mock feminist values sparked ire when it went viral on Twitter.

Kay told Insider that the stay-at-home girlfriend lifestyle has not been limiting or financially debilitating for her. She said it’s been liberating because she is able to work flexibly as a content creator while also choosing to care for her boyfriend.

“I feel like I have power as a female because I’m choosing what to do,” she said.

She also said she thinks the lifestyle represents a societal movement away from the idolization of “girlbossing.”

As Insider previously reported, the term “girlboss” was popularized in 2014, referring to a self-made woman. The term  became mired in controversy in 2020 due to suggestions that it referred mainly to white women while excluding people from minority backgrounds.

“I think there’s a shift on social media about females not having to girlboss so much. It’s more okay for women to not be so consumed by hustle culture and just chill out a little bit,” Kay said.

Rae also said she wants to promote the stay-at-home girlfriend lifestyle to normalize the idea of not having to have a traditional job and still maintaining autonomy. While she acknowledged that it is not always financially viable for a woman to stay at home while her partner earns the bulk of the household income, she still wants to promote the idea that there are “options in life.”

“I think people think I’m very regressive and I’m pushing feminism back with my choices,” she said, but she disagrees with that premise.

Abbott Elementary Works Thanks To Some Heartfelt Inspiration