The Vatican, for the first time, calls Russia the aggressor in the war. 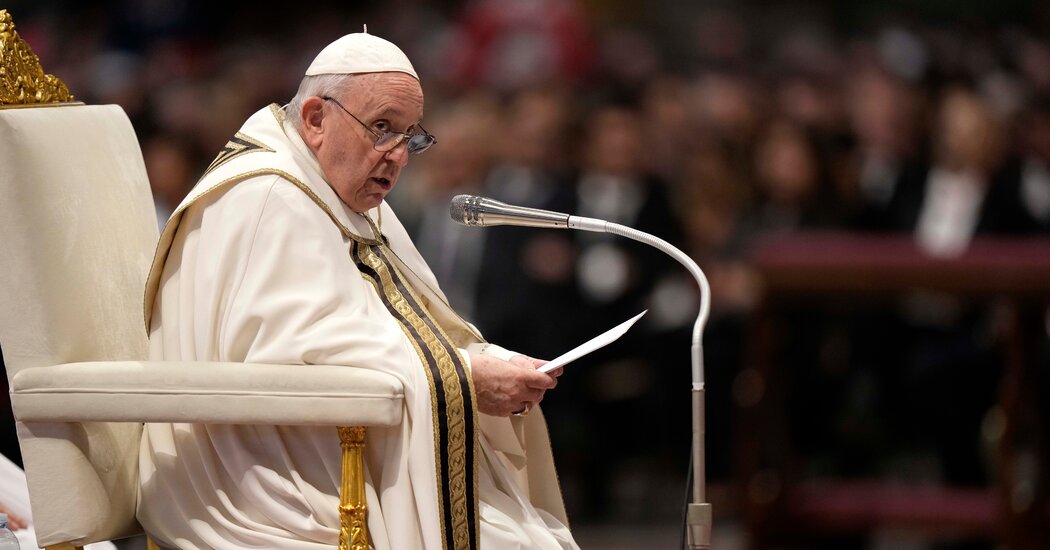 The Vatican on Tuesday for the first time said that Russia was the aggressor in the Ukraine war, condemning Moscow’s invasion in strong terms after earlier comments by Pope Francis prompted criticism from Kyiv.

“As for the large-scale war in Ukraine, initiated by the Russian Federation, the interventions of the Holy Father Pope Francis are clear and unequivocal in condemning it as morally unjust, unacceptable, barbaric, senseless, repugnant and sacrilegious,” the Vatican said in a statement issued Tuesday.

Vatican experts said it was the first time that Francis has explicitly blamed Russia in the conflict.

Since Russia’s invasion in February, critics have said that Francis has risked his moral authority by failing to criticize President Vladimir V. Putin by name, upholding longstanding Vatican policy not to pick sides in a conflict to better preserve the church’s chances of playing a constructive role in potential peace talks.

Last week, Ukrainian officials were dismayed when Francis referred to Daria Dugina, a 29-year-old Russian ultranationalist who spoke out in favor of the invasion of Ukraine, and was killed by a car bomb, as an “innocent” victim.

“The madness of war,” Francis said at his weekly general audience. “The innocent pay for war — the innocent! Let us think about this reality and say to each other, ‘War is madness.’”

The Vatican immediately attempted to ease Ukraine concerns. In a statement to the Ukrainian edition of Vatican News last week, editorial director Andrea Tornielli said the pope sought to be “close to all those who suffer the consequences of the war, first of all the innocent population of Ukraine, which is dying under Russian bombs.”

But the statement issued on Tuesday suggested that the Vatican wanted to take a more forceful step to quell the controversy.

“On more than one occasion, as well as in recent days, public discussions have arisen as to the political significance” of the pope’s statements, adding that Francis’ words “are to be read as a voice raised in defense of human life and the values attached to it, and not as taking a political stance.”

Share
Facebook
Twitter
Pinterest
WhatsApp
Previous articleI was in severe antidepressant withdrawal when I won ‘Chopped.’ Here’s what you didn’t see on TV.
Next articleNebraska man paddles 38 miles in hollowed out pumpkin he grew himself, setting world record

The Ava One-Liner Abbott Elementary Fans Love To Quote Most