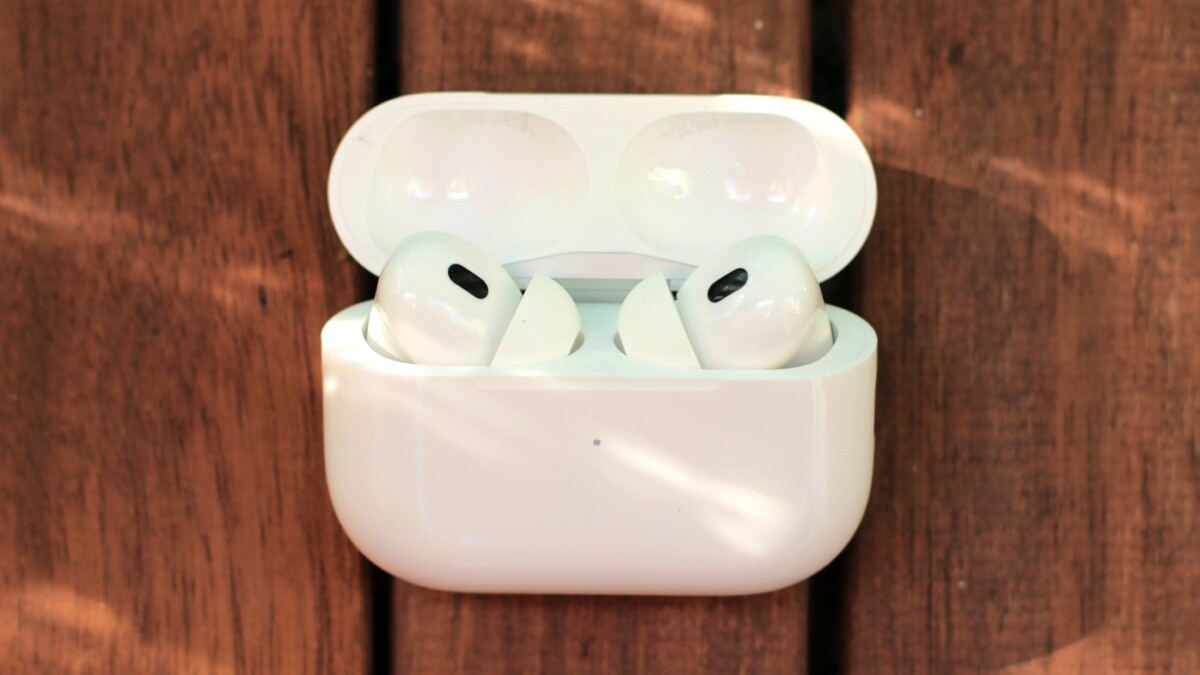 When it comes to AirPods, Apple is clearly in no rush to disturb the status quo.

It took three years for Apple to evolve its AirPods line and release the AirPods Pro in 2019, a more premium pair of wireless earbuds with improved sound and features like active noise cancelation, but also a higher price tag.

And here we are another three years later with an upgrade simply called the AirPods Pro (2nd generation). The new AirPods Pro look very similar to the older model and have the same $250 price, but come with a number of small improvements, including more powerful active noise cancelation, a new feature called Adaptive Transparency, and better battery life.

I tested the new AirPods Pro for about a week and I can tell you that these earbuds are great, though they might not be worth the upgrade if you already own the original AirPods Pro.

Not really that different

Let’s get one thing out of the way: No one will notice that you’re wearing the second-generation AirPods Pro. They look the same as the old AirPods Pro, with a short stem, an elliptical white head adorned with black speaker grilles, and a silicone ear tip.

There’s an additional, extra-small silicone tip included in the box now, but otherwise, the design is the same, down to the way these tips are clipped onto the buds.

Even the white charging case appears unchanged, unless you look really closely and notice the lanyard loop on the side and the three speaker holes on the bottom next to the Lightning port (yes, the new AirPods Pro still use the Lightning charging cable).

For more details about the look, feel, and setup, you can check out our review of the original AirPods Pro. That’s how similar these two models are.

The good news about that design consistency? They’re still really comfortable. The silicone tip they came with fit me alright, but I also tried the largest one and the fit was even more snug. They never fell out, even during intense workouts. I was able to wear them for hours without noticing they were in my ears.

I even put them to the ultimate test: I played some relaxing music and took a nap while wearing them, and they caused me no discomfort. I guess that’s one reason why Apple hasn’t changed much in the design — it was pretty good the first time around.

iPhone 14 Pro and Pro Max review: Apple’s Dynamic Island is worth the visit

As for the touch commands, they’re good but not perfect. Pressing the stem to play/pause and skip to the next track works well. Pressing and holding the stem to activate the transparency mode and noise cancelation, however, is a bit hit or miss. When someone’s talking to you and you want to hear them by enabling transparency mode, there’s a one-second wait to activate the feature which feels a bit too long. Also, adjusting the volume by sliding your finger up or down the stem takes some getting used to — and it never really worked perfectly for me.

Small improvements, some more noticeable than others 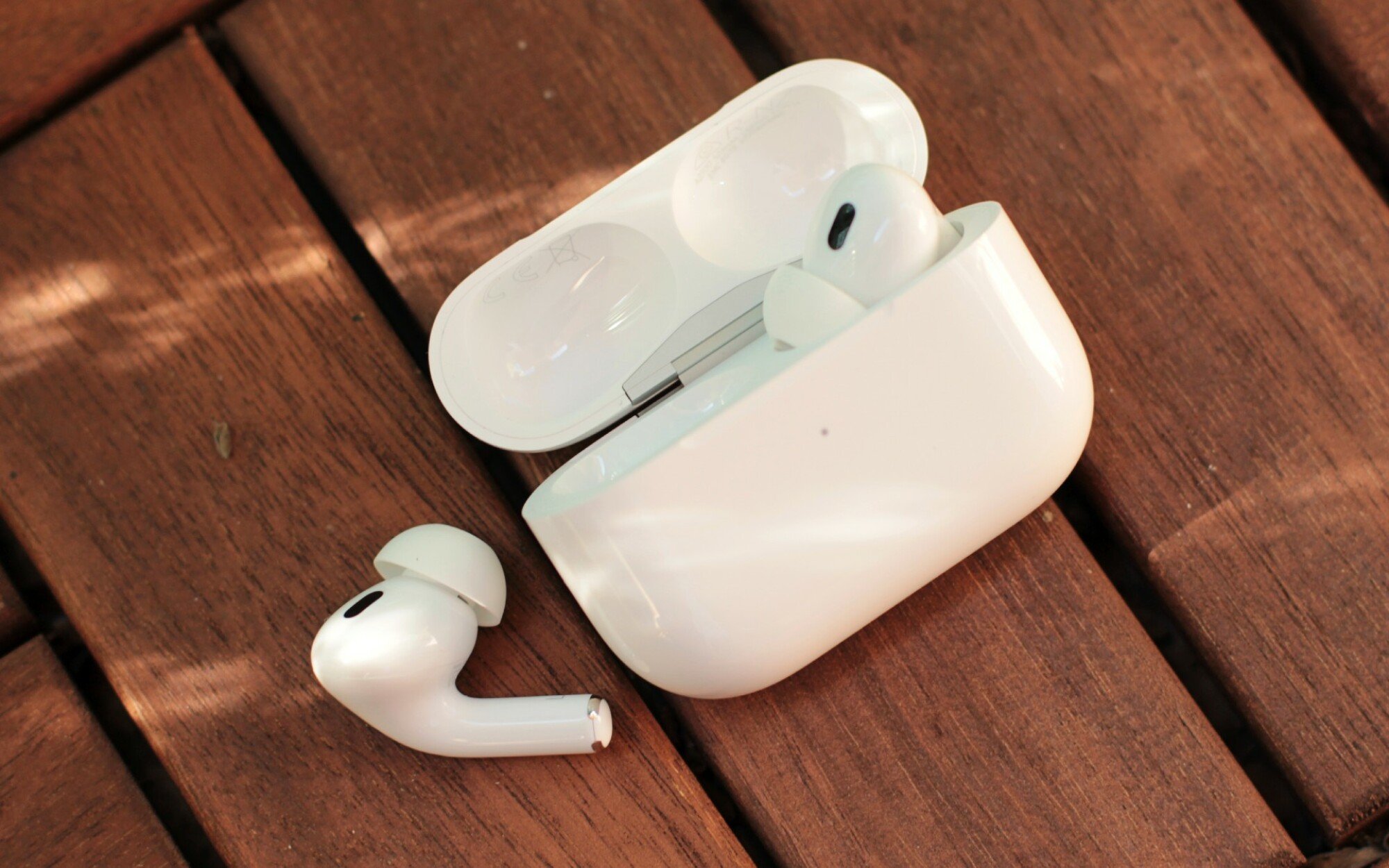 The battery life for the new AirPods Pro was indeed as advertised as I managed to squeeze roughly 7 hours out of one charge. Though note that, to achieve this result, I combined audio playback with intermittent use of noise cancelation and adaptive transparency modes. If you’re carrying your case with you, rest assured that battery life will never be an issue. But even without the case, these earbuds will have plenty of juice for very long commutes.

The new AirPods Pro have Bluetooth 5.3 support, which is a big upgrade compared to the Bluetooth 5.0 on the original AirPods Pro, bringing improved sound quality and energy efficiency. There was speculation that the new AirPods Pro would support lossless audio quality, but Apple never mentioned it. (We’ve asked Apple about it and will update this article when we hear back.)

Bluetooth 5.3 doesn’t support lossless audio on its own, but Qualcomm does have a chip which offers lossless audio over this standard, so it’s possible that Apple plans to introduce the feature at a later date. It’s hard to say whether it would be noticeable as the sound is really good (more on that later), but it is a bummer given that lossless is one of Apple Music’s key features.

As for the new Adaptive Transparency feature, well, it works a little differently than on other headphones I’ve used. Instead of letting sounds from the outside world in and turning down the volume, the new AirPods Pro leave the volume at the same level. This is good if you want to listen to music while being aware of your surroundings, but it’s not ideal when you just need to hear what the person next to you is saying. The “adaptive” part of Adaptive Transparency didn’t really do much for me. Perhaps the feature really kicks in during very specific situations, such as an ambulance siren blaring nearby, but I didn’t notice it.

Finally, a replacement for over-ear headphones?

The improved sound and active noise cancelation are the most important new features of the AirPods Pro. This is where Apple has really delivered.

The first time I turned on active noise cancelation while walking down a busy street, I was in awe. The sounds around me disappeared almost completely, which I didn’t expect from a pair of wireless earbuds. I turned the music off and some of the street noise came through the silence, but the roaring cars were reduced to a manageable hiss, and everything but the loudest of yells was toned down enough to be barely noticeable. 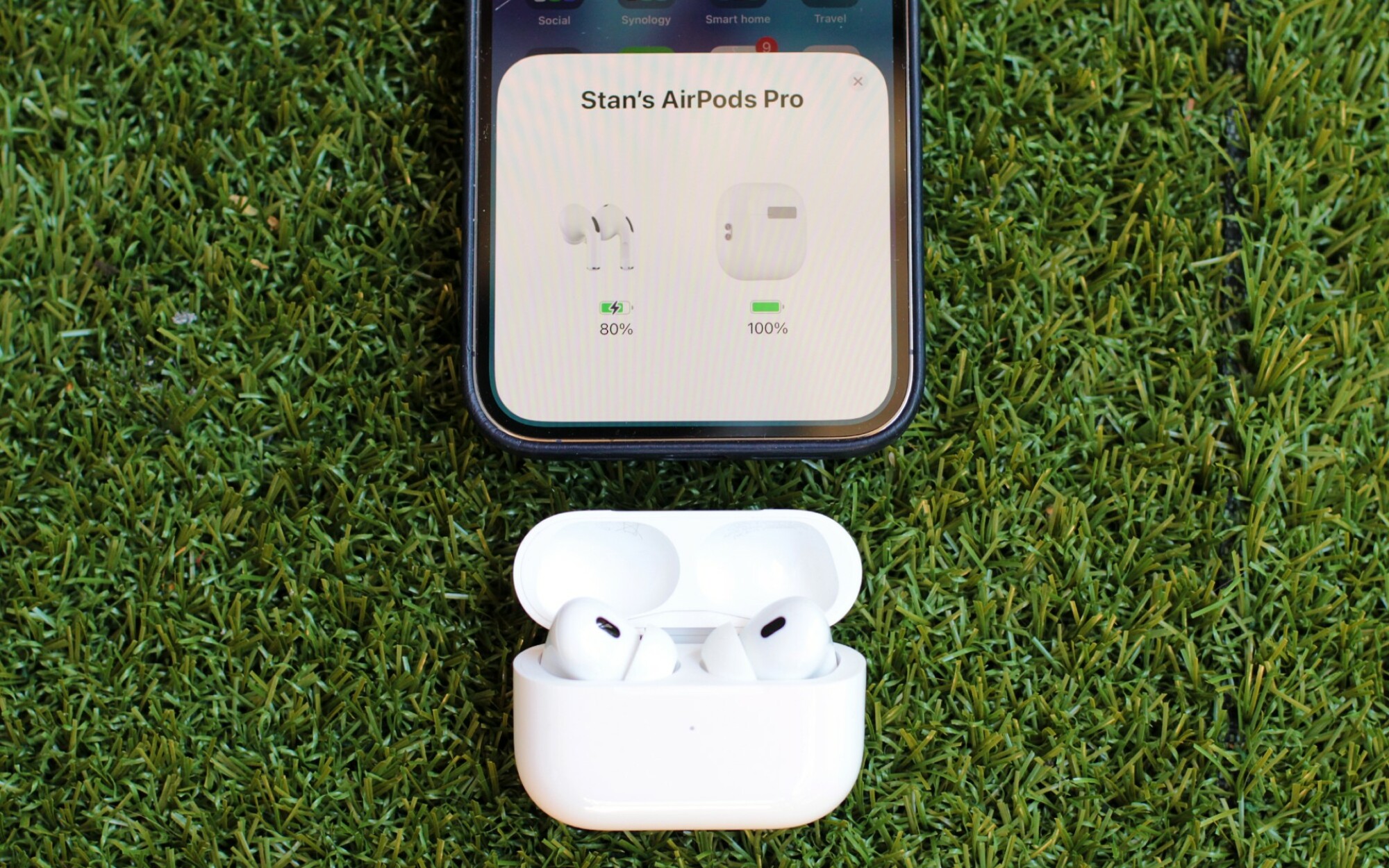 As soon as you open the case, nearby Apple devices will recognize the new AirPods Pro.
Credit: Stan Schroeder/Mashable

In some aspects, the active noise cancelation was even better than on my daily drivers: B&W’s excellent PX7 over-ear headphones. For example, the new AirPods Pro were better at canceling the noise of people talking (again, this may not be ideal for people who want to drown out background noise but still be available when someone talks to them). These are the first pair of earbuds I’d actually consider taking on an airplane (instead of my much larger and clunkier over-ear headphones).

But is the sound good enough?

I’m happy to report that it is. I’ve put the new AirPods Pro through a very diverse palette of genres, mostly on Apple Music’s highest quality settings. They handled Ryan Adams’ acoustic performance in Carnegie Hall just as well as they did All Them Witches’ dirty hard rock sounds on their self-titled album, The Knife’s electronic masterpiece Silent Shout, and the math metal grinder of Meshuggah’s Immutable.

I’ve always gotten plenty of bass from the new AirPods Pro without it being over the top, as well as crisp vocals, and even some sense of the sound stage on live performances. Modern headphones are sometimes tuned for a couple of popular genres and fall apart when given something radically different, but the new AirPods Pro did an equally good job with complex jazz performances and very heavy guitar tunes.

There are minor issues that I fixed by tweaking the settings. For example, while listening to Interpol’s Fables, I realized the sound was muddled and the back vocals near the end of the song were way louder than they should have been. I fixed that by turning off Dolby Atmos and Spatial Audio in the settings. It’s a known issue with Apple’s implementation of spatialized audio — it just doesn’t work for every song.

The details, both pleasing and annoying 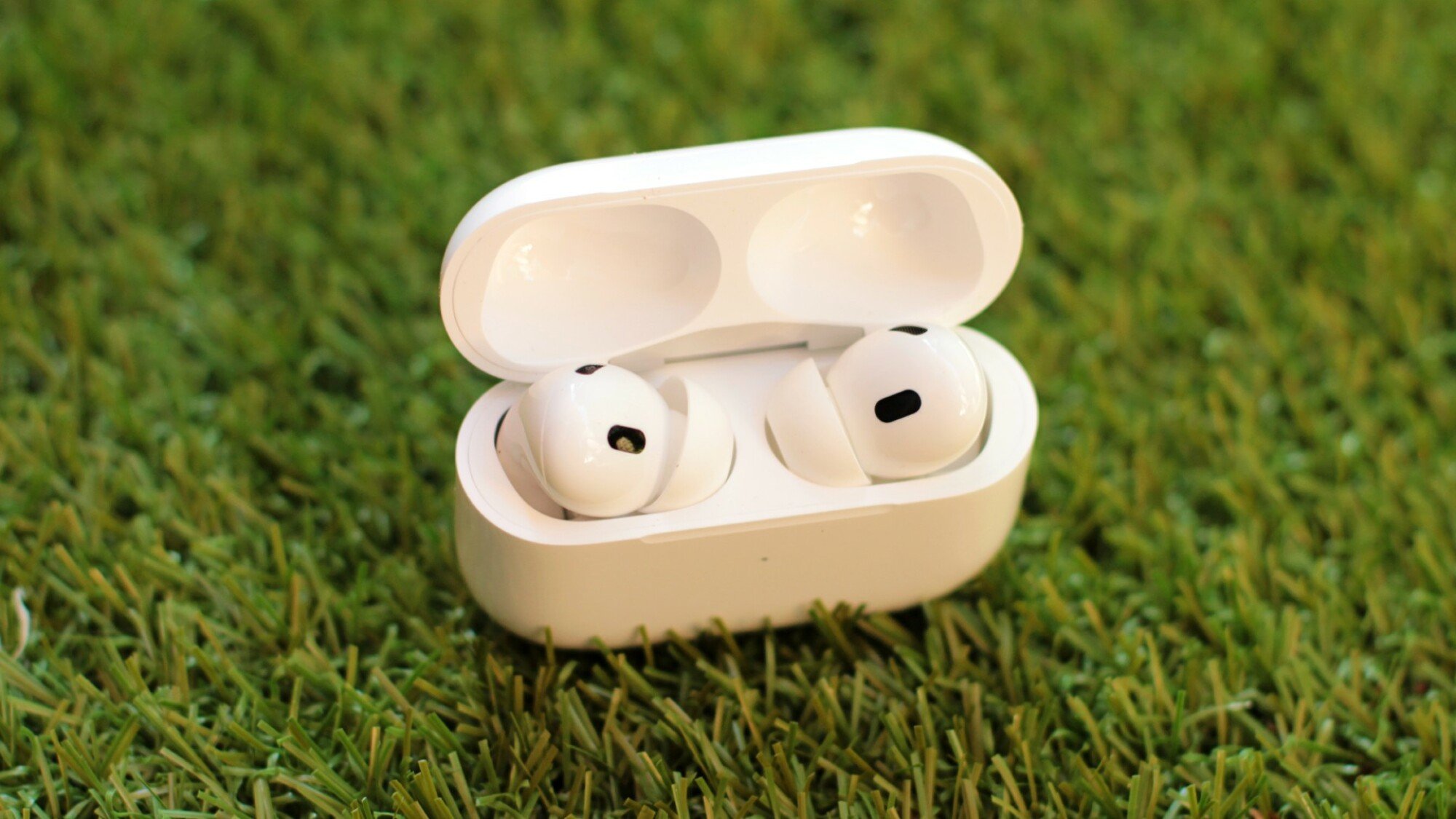 The new AirPods Pro have a number of tiny improvements which likely won’t make you spend the cash for an upgrade (especially if you have the last generation AirPods Pro), but they do add up. For example, the MagSafe Charging Case is now sweat- and water-resistant. It has a loop for easier carrying and it can be charged with the Apple Watch’s wireless charger.

Also, the earbuds now have sensors for in-ear detection, which mostly worked well, but occasionally I’d only get one earbud to work, with the other stubbornly “detecting” that it’s not in my ear.

This did not happen often, but it’s these little issues, as well as the occasional random disconnection from the music source, that make me yearn for the days of cabled headphones. Fortunately, I didn’t encounter these problems with the second-generation AirPods Pro very often.

The AirPods Pro (2nd generation) are a great pair of wireless earbuds. They sound wonderful and have almost uncanny active noise cancelation. Apple also upgraded them in myriad little ways, though you probably won’t notice some of them. For a first-time buyer who can afford the $250 price tag, they’re a no-brainer.

If you’re thinking about upgrading from the first-generation AirPods Pro, however, the choice is not so easy. The new AirPods Pro look about the same on the outside and the improvements, while numerous, are mostly minor. You won’t regret buying them, but they’re not an essential upgrade.