The most scenic bridges to drive across in the US 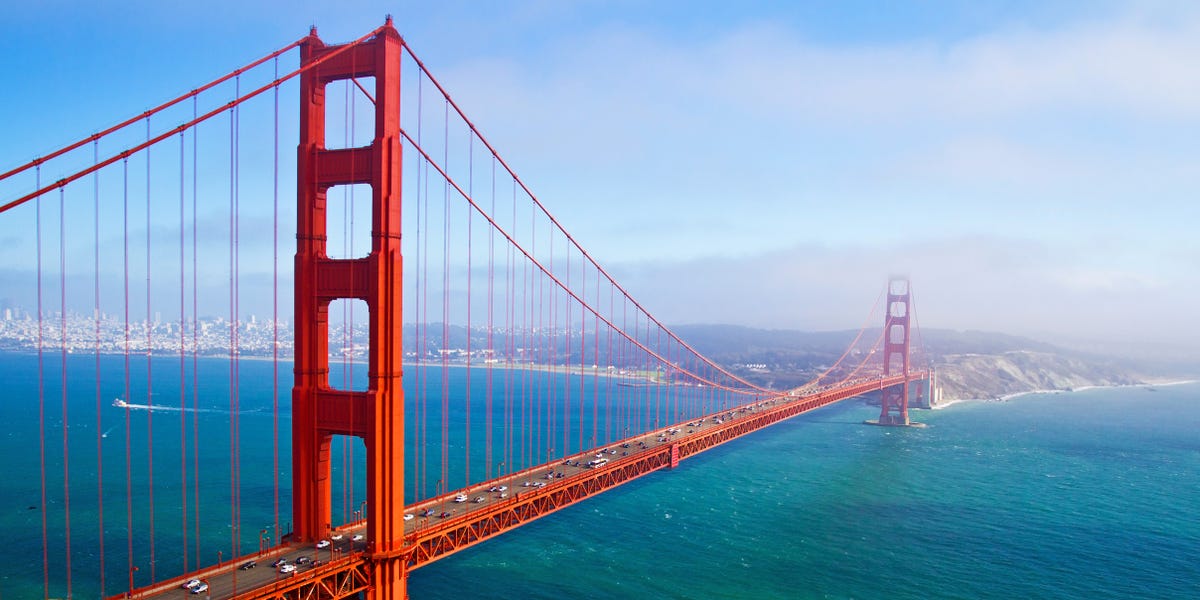 Underneath the bridge sits the Little Red Lighthouse, one of the last remaining lighthouses in New York City.

Royal Gorge Bridge in Colorado is the highest suspension bridge in the US.

The bridge, which is on the National Register of Historic Places, towers 956 feet above the Arkansas River.

Rainbow Bridge in Niagara, New York, is right next to Niagara Falls.

The bridge can be used to drive between the US and Canada.

The Golden Gate Bridge is a recognizable landmark on the West Coast.

The bridge is known for its art deco style and special "International Orange" color.

The bridge connects Florida's mainland to the Florida Keys.

The Sunshine Skyway Bridge is known for its yellow cables and ocean scenery.

Connecting St. Petersburg and Bradenton, Florida, the bridge collapsed in 1980 when a freighter ship crashed into one of its support columns. The bridge was moved, raised, and fitted with bumpers called "dolphins" and reopened in 1987.

Bixby Bridge along the Pacific Coast Highway is an iconic lookout point.

Bixby Bridge sits 260 feet above Bixby Creek. The landmark appears in the opening credits of "Big Little Lies" as well as several films.

Built in 1883, Roseman Bridge is featured in the novel and the film adaptation of "The Bridges of Madison County." Some believe that the bridge is haunted by a man who escaped from a county jail.

Bay Bridge in the Chesapeake Bay opened in 1952.

Formally called William Preston Lane Jr. Memorial Bridge after the Maryland governor who approved its construction, it's most commonly referred to as Bay Bridge.

Mackinac Bridge in Michigan stretches for 5 miles, making it the fifth longest suspension bridge in the world.

The bridge opened in 1957 as a path between Michigan's Upper and Lower Peninsulas.

The Hoover Dam Bypass crosses over the Colorado River in Boulder City, Nevada.

Penobscot Narrows Bridge in Prospect, Maine, is taller than the Statue of Liberty.

From its observatory, the tallest bridge observatory in the world, visitors can see as far as 40 miles away.

London Bridge was bought by the founder of Lake Havasu City, Arizona, and moved from London in 1968.

The bridge is decorated with lampposts made from melted cannons belonging to Napoleon's army from the Battle of Waterloo.

The John A. Roebling Suspension Bridge between Ohio and Kentucky was the longest bridge in the world until the Brooklyn Bridge took its title.

The bridge gets its name from John A. Roebling, a civil engineer who designed the structure.

The Edmund Pettus Bridge in Selma, Alabama, is a civil rights landmark.

The bridge was the site of Bloody Sunday, when civil rights marchers were brutalized by police as they marched for voting rights in 1965. It's now a National Historic Landmark.

The bridge has two sections, an East Span and a West Span.

Lake Pontchartrain Causeway in Louisiana is the world's longest bridge over a body of water.

Lake Pontchartrain Causeway stretches for 24 miles and is held up by 9,000 concrete pilings.