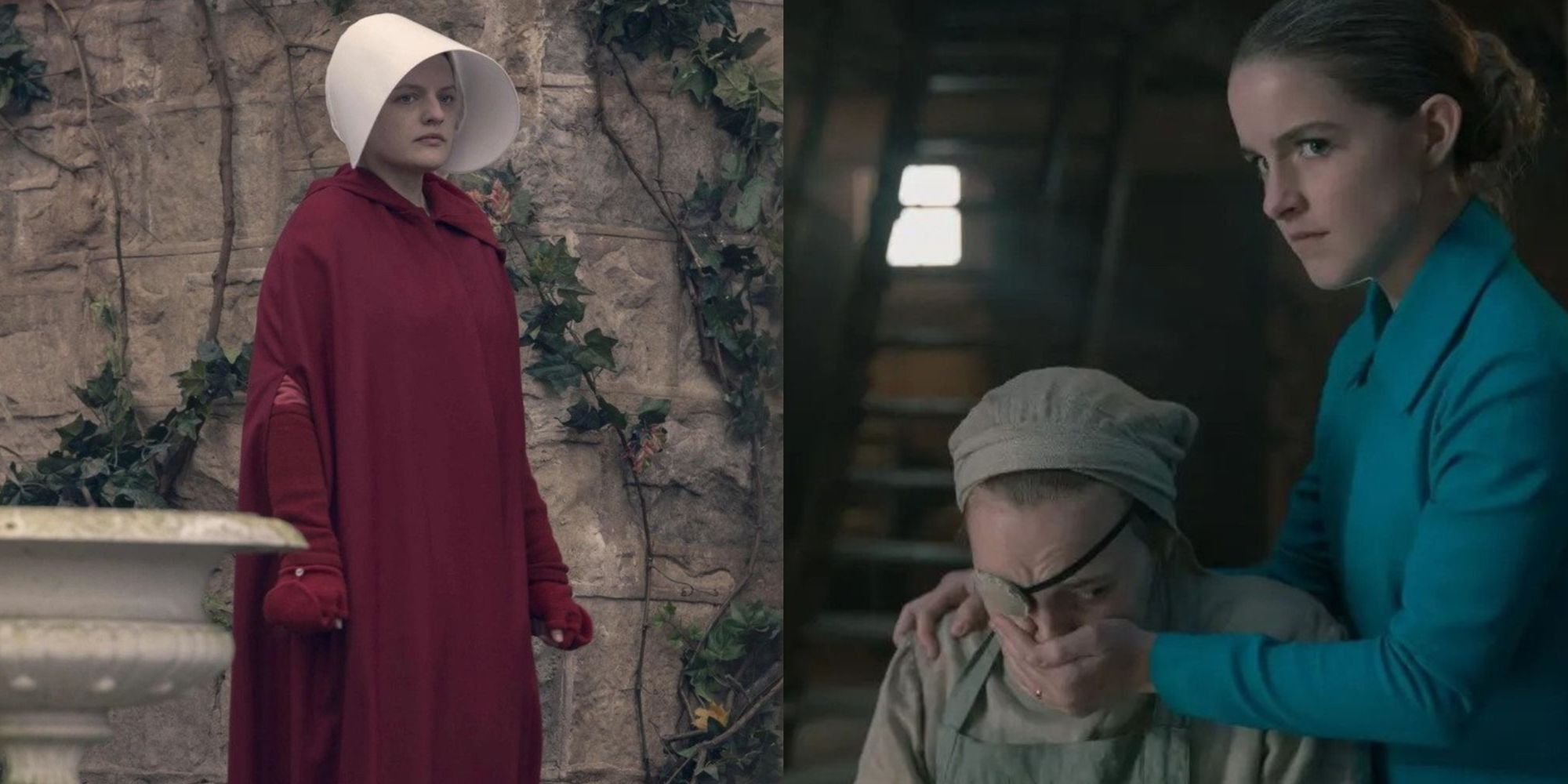 The Republic of Gilead was founded with class idealizations at its core, ensuring that its people fall in line with their duty to ‘rebuild America’; particularly women, who must regain a sense of domestication under the theocratic reign. An economy based on the use of slave labor manifests in multiple aspects: food is harvested by those who are sent to farming colonies; infertility is solved by sexual slavery; and women are forced to work in domestic roles, cleaning and preparing food for those of higher status. Created through terrorism and manipulation of religion, Gilead rules through a misguided version of Christianity and violence to beat rebellion.

In The Handmaid’s Tale, viewers are thrust into the established world of Gilead, with the show utilizing flashbacks to piece together the previous lives of different members of the social stratification. From the all-powerful Sons of Jacob, to the lowest class of the Unwomen, The Handmaid’s Tale explores Gilead’s structured hierarchical system through the eyes of prominent figures such as June (Elisabeth Moss), Fred (Joseph Fiennes), Aunt Lydia (Ann Dowd), and Rita (Amanda Brugel).

COLLIDER VIDEO OF THE DAY

The Sons of Jacob

The Sons of Jacob existed long before the Republic of Gilead’s establishment, running as a conservative political group that gained popularity during America’s issues of environmental destruction and infertility crisis. Although their religious ideology is unnamed, the Sons of Jacob believe in a denomination similar to Puritanism, where the Old Testament is followed as their scripture.

Believing that America’s problems stemmed from their sins, the group is vehemently against birth control, same-sex relationships, abortion, divorce, and immodesty. They favor women who practice their ‘divine destiny’ to produce multiple children, while not partaking in careers or education. Due to environmental issues, they also believe in organic foods and sustainability. The highest ranking in Gilead, the Sons of Jacob amassed power through terrorist acts, and some members form a ‘Committee’, who oversee the theocratic reign.

Members of the Sons of Jacob can be awarded the high status rank of Commander, who serve as military leaders, law-makers, and politicians. Commanders are allotted handmaids so that they may conceive children for the family, initiated through a regimented rape every month. An agent of oppression within the home, Commanders have power over every other household member.

RELATED:7 Differences Between ‘The Handmaid’s Tale’ Series And Original Novel

Frequently, The Handmaid’s Tale explores the hypocrisy of those in power, seen in Fred Waterford’s visits to an underground brothel, or Warren Putnam’s (Stephen Kunken) affair with Janine (Madeline Brewer).

The secret police organization, the Eyes are a network of loyal Gileadeans who act as informants to members of the Committee. Primarily, the Eyes work to spy on Commanders, informing their higher-ups on any actions that go against the Old Testament, such as engaging in sexual relationships with handmaids outside the ceremony.

The Eyes engage in police and border patrols, spying on suspects, and utilizing brutal interrogation techniques to gather vital information. The Eyes operate in secret, with their loyalty only lying with those who ask for information.

Guardians are a class in Gilead who enact multiple positions in the general day-to-day ruling of Gilead. Generally under the guidance of Commanders, Guardians work as drivers and escorts for their household, as well as menial tasks such as mending.

However, they also uphold duties similar to policemen: battling against protesters and those who defy orders; as well as fight on the frontlines. Guardians can be awarded an Econowife if they prove their undulated loyalty.

The highest rank a woman can be granted in Gilead is a Wife to a Commander. Dressed in shades of teal, Wives are granted their status through their ‘purity’, and, prior to Gilead’s establishment, many aided in suggesting rules and regulations that align with their perception of God’s wishes.

Although granted some rights, Wives live a mundane life. Outside of caring to their children if lucky enough to have any, Wives often partake in hobbies such as knitting, for they are forbidden from house duties that Marthas do. Wives are not permitted to have an education, write, or read; of which any can result in serious consequences, such as Serena’s (Yvonne Strahovski) finger being mutated after she read from the scripture.

With a goal to purify Gilead through submission and scripture, Aunts are the leaders of the most valuable class – handmaids. Working in the Rachel and Leah Center (also known as the Red Center), the facility aims to treat ‘insubordination’ of fertile women to train them to become meek handmaids.

Aunts are also responsible for being present during births and executions, watching over those in the Colonies, and help teach Daughters to be prepared for their lives as Wives. Dressed in brown, modest clothing, they are governed by the founding Aunts – Lydia, Elizabeth (Edie Inksetter), Helena, and Vidala.

A class of their own, Sons and Daughters within Gilead refers to children who belong to Commanders. This is their class regardless of whether they were conceived by Wives, Handmaids, or forcefully adopted during the rise of Gilead – where their biological mothers were made to become a part of a lower social class.

Sons are dressed in blue or grey suits, and receive education much like the Commanders have – meaning they are allowed to read and write. Daughters are dressed in pink until they reach a marriageable age, where they then wear modest attire in white. They do not learn literacy, rather they attend an ‘arts school’, and then premarital preparatory classes. Their sole purpose is to become Wives who can bare children for their Commanders.

Considered those who are less restricted in the Gileadean society, Econopeople are citizens who, prior to Gilead, did not commit any ‘sins’. These people can live together with their original families, and live out their day-to-day lives with minor restrictions in comparison to the rest of Gilead.

Econopeople are seen in grey clothing, with the daughters dressing in striped dresses. Many Econopeople marry between their own class, however, those who are attractive enough have the opportunity to marry a Commander or a Son.

Namely, Handmaids are the ones who provide a service that would not exist without the environmental issues causing a decline in fertility rates prior to the creation of Gilead. Captured due to their fertility, Handmaids are assigned to Commanders, where they take on a symbol of their name; for example, June belonged to Fred Waterford, so she became Offred.

Here, they serve as concubines to produce the next generation of Gileadeans. Dressed in red, they are easily identifiable, and are considered an important part of the society’s structure.

Working as domestic servants, Marthas are assigned to the household of a Commander. Dressed in a dull green, they are in charge of the cooking, cleaning, looking after children, and helping host for visitors in the household; as well as serve under the Commander and his Wife.

Marthas are infertile women who previously worked in an occupation related to their current house duties, who are now not allowed to go shopping, read, or write. Many of them are engaged in a network that aims to spread information – whether it be gossip or resistance work.

A social class hidden to most of Gilead, Jezebels are attractive women who have been made into entertainers and prostitutes for the Commanders and their guests to frequent in state-sanctioned brothels.

Forcefully sterilized to eradicate the need for protection or contraception, Jezebels only reside in the brothel, where they must dress in sleazy outfits and make-up, controlled by Aunts.

The lowest social class, Unwomen are those who are sent to work to death in the Colonies. To become an Unwoman, a female must be involved in something deemed sinful in Gilead; ranging from divorced women, nuns, and failed Handmaids, to activists, journalists, and ‘gender traitors’ – those who engage in homosexuality or identify as transgender.

The fate Unwomen is bleak within the Colony – where they will die of toxic waste, malnutrition, or injuries enforced through their slavery.

Underrated Horror Movies From The 90s (And Where To Stream Them)

‘House of the Dragon’: Who Was Jaehaerys I Targaryen, the Old King?