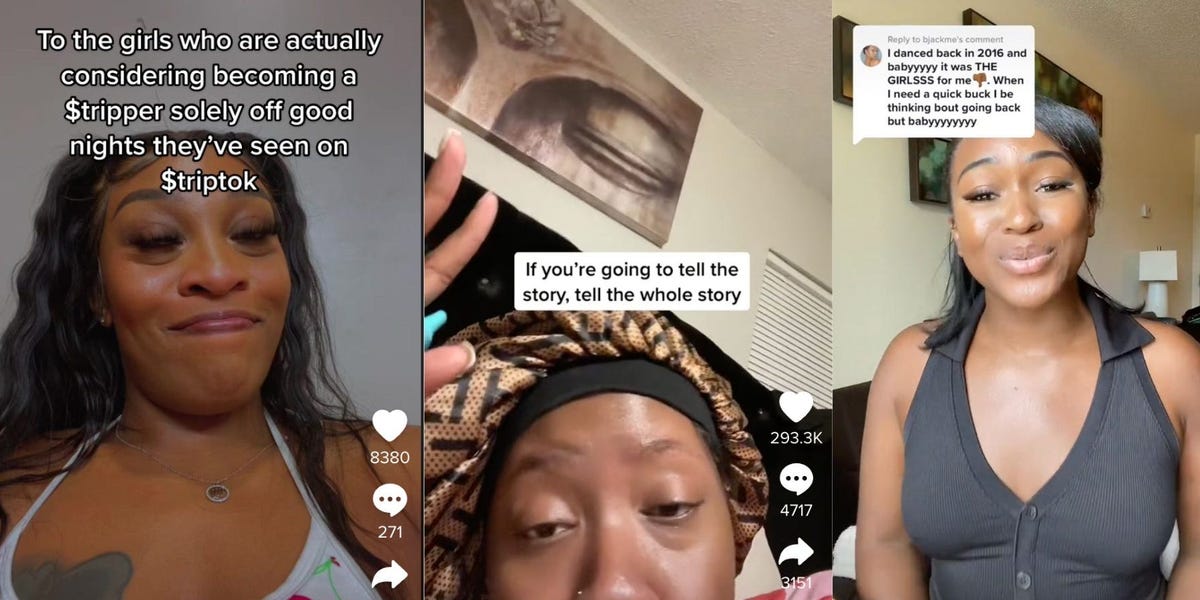 TikTok users who say they are strippers are warning others that what they see in TikTok’s #StripTok community is glamorizing stripping and not offering the full picture.

TikTok user @terreekennedy posted a video using a sped-up version of the song “Cry” by K. Michelle, with on-screen text writing, “To the girls who are actually becoming a $tripper solely off good nights they’ve seen on $triptok.” She then mouths along to the lyric, “You’re gonna cry.”

The video received over 60,000 views and has been stitched by other users who have shared their own stories of stripping.

Terree, who asked to only be referred to by her first name, told Insider that she created the video in order to “set proper expectations” of stripping because “it can be a lot to get into.”

She said that there has been an “influx of girls” coming to her club and becoming strippers because they have been influenced by social media but may not be aware of the realities of stripping, such as it being an “inconsistent source of income and that strippers are often in a vulnerable position.”

Terree, who has been stripping for eight years, doesn’t believe that people posting about the “good nights” are intentionally glamorizing stripping but wants people watching to know that “social media is a highlight reel,” and that people should do their research before starting to strip because of videos they see on TikTok.

The hashtag #StripTok has three billion views, and features many videos of people counting out large amounts of money on camera, which they claim was earned from one night of stripping.

TikToker @firstclassash, who says she is a stripper and makes several videos about stripping, stitched the video to ask “dancers and ex-dancers” to share “the trauma you’ve experienced as a dancer.”

The caption on the video urged people whose “content inspires others” to be “transparent and open” and “let people know what they could possibly be signing up for.” Her video received 1.5 million views. She did not immediately respond to Insider’s request for comment.

Another TikTok user, who goes by the username @Missomo.xo, also stitched the video. In her video, which received over 300,000 views, she said, “As many good nights as I’ve had, dancing is a whole lie.”

Omo, who runs the @Missomo.xo account and asked that her last name be withheld for privacy reasons, told Insider that she “wanted people who were interested in going to the club and dancing to have the full picture.”

Omo said she has been stripping for six years. In that time, she said she has experienced harassment, inconsistent income, and poor management.

“I do think it is our responsibility to tell the truth,” she said. “You’re going to make money, you’re going to meet cool people, but there is also a downside to all of it.”

‘We need the space for our stories to be heard’

TikTok user @hellysangel, who goes by Helly and has over 300,000 followers, often posts videos for #StripTok talking about her day-to-day realities of stripping. She told Insider that “glamorizing” stripping is a big part of the industry in general and has carried on in online spaces.

Helly believes the reason that #StripTok usually only shows the positive sides of stripping is because those videos typically do well on TikTok, and talking about the specifics of stripping can be a violation of TikTok’s community guidelines, which prohibits “sexually explicit content” or content that depicts or supports “adult sexual solicitation.” TikTok did not immediately respond to Insider’s request for comment.

She added that videos of strippers telling stories of their work often “get taken down immediately” because “it’s automatically seen as inappropriate even if the content isn’t even sexual.”

“We need the space for our stories to be heard. Because if we’re not allowed to talk about it, then these young girls aren’t hearing it and they might be wrongly influenced,” Helly said.