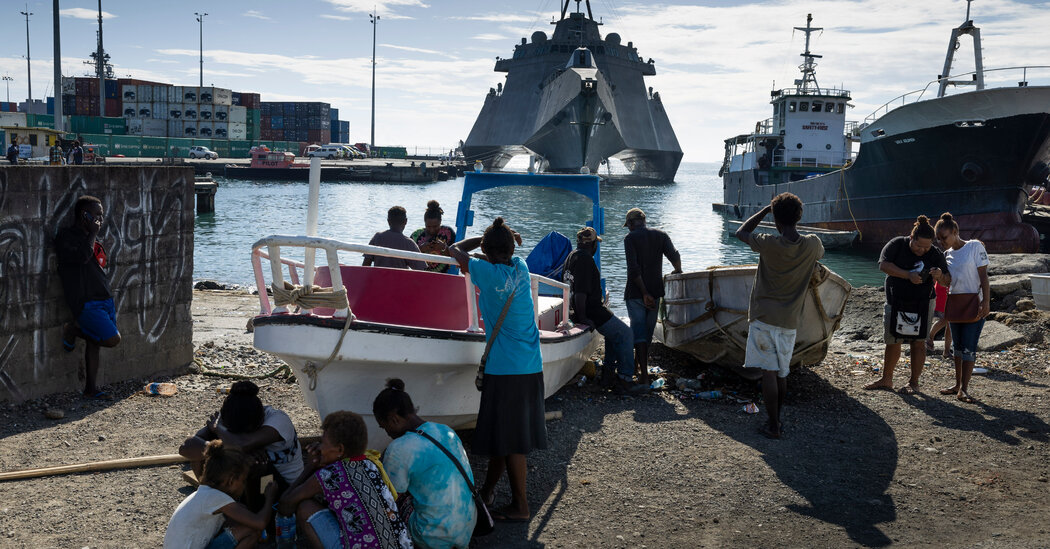 WASHINGTON — The Solomon Islands has suspended visits by U.S. and other foreign military vessels, American officials said Tuesday, raising concerns in Washington that the Pacific nation is turning away from engagement with the United States in favor of working with China.

The Solomon Islands gave notice of the decision after a U.S. Coast Guard ship and a British Royal Naval ship failed to get timely approvals last week to make routine stops in a port.

The Solomon Islands government formally notified the United States on Monday that it had placed a moratorium on all foreign military ship visits pending a review of protocols and procedures, Vedant Patel, a deputy spokesman for the State Department, said Tuesday.

The move appeared to be a rebuke of the United States, which has sent top officials to the Solomon Islands in recent months to strengthen relations.

Mr. Patel said he did not have information on whether China had suggested the suspension or if the Chinese navy had recently visited the country.

Documents leaked in March revealed that the administration of Prime Minister Manasseh Sogavare and Chinese officials had signed a secret security agreement that would allow the Solomon Islands to call on China to send military and security forces to the country if needed. Terms of the agreement said the deal was to remain secret, but opponents of it shared copies of a draft online. The Australian government, which sees the Pacific islands as within its sphere of influence, verified the authenticity of the documents.

Some analysts said the agreement could open the way for Chinese troops and naval ships to establish a presence in the Solomon Islands, which played a pivotal role in World War II. In August 1942, American-led forces and the Japanese military began fighting an intense six-month series of battles in and around Guadalcanal, the country’s main island. About 7,000 American troops died, but the U.S. military triumphed, which paved the way for its efforts to retake the Philippines and attack the islands of Japan.

National security officials in both the Trump and Biden administrations have feared that China would gain a foothold in the Solomon Islands and cut off the U.S. Navy’s ability to project power and support partners and allies in the Asia-Pacific region.

The Coast Guard vessel, the Oliver Henry, had to divert to Papua New Guinea after the Solomon Islands failed to respond to a request to dock for a routine refueling stop, U.S. officials say.

The vessel had been in the region as part of operations coordinated by the Pacific Islands Forum Fisheries Agency to monitor illegal or unregulated fishing. The British naval ship that was not given timely approval, the H.M.S. Spey, was involved in the same operation.

“It’s disappointing that the Oliver Henry was not provided diplomatic clearance in support of this operation,” Mr. Patel said.

Mr. Sogavare issued a statement on Tuesday saying there had been delays in information sharing and asking other nations to “give us time to review, and put in place our new processes, before sending further requests for military vessels to enter the country.”

A Pentagon official said U.S. diplomats in Honiara, the capital of the Solomon Islands, had been in touch with counterparts in the government there about ship visit procedures and requisite clearances.

Charles Edel, Australia chair at the Center for Strategic and International Studies and a former State Department official, said a denial of a visit by a U.S. military vessel was not in itself a significant concern.

But “given the larger context of Solomon Islands Prime Minister Sogavare’s recent signing of a secretive security agreement with China, his acceptance of a bid from Huawei to build cell towers in the Solomon Islands and his increasing reluctance to cooperate with the U.S. and Australia, this decision reflects a concerning trend,” he said.

“These indications suggest that Sogavare is increasingly looking to bring the Solomon Islands closer to China, and further away from the U.S., Australia and the rest of the Pacific Island community,” Mr. Edel added.

The United States has scrambled to try to blunt China’s influence in the Solomon Islands. In early August, Wendy R. Sherman, the deputy secretary of state, and Caroline Kennedy, the U.S. ambassador to Australia, took part in a ceremony there that marked the 80th anniversary of the Guadalcanal battles. Both their fathers were wounded in the fighting.

In April, Kurt Campbell, the top official on Asia policy in the White House, and Daniel Kritenbrink, the assistant secretary of state for East Asia and the Pacific, were in a U.S. delegation that traveled to the Solomon Islands in part to warn Mr. Sogavare about his security agreement with China.

In February, Antony J. Blinken, the U.S. secretary of state, announced during a visit to Fiji that the United States planned to reopen its embassy in the Solomon Islands after a closure of 29 years.

In 2019, Mr. Sogavare cut diplomatic ties with Taiwan, the self-governing, democratic island that Chinese leaders want to bring under their rule, and established formal relations with China. But he has insisted his nation does not intend to host a Chinese naval base.

Last year, anti-China sentiments contributed to deadly protests and riots against Mr. Sogavare in Honiara. People burned and looted stores in the Chinatown area of the capital, and three bodies were found in one building there.