Serena Williams’s Magical Run at the U.S. Open Isn’t Over Yet 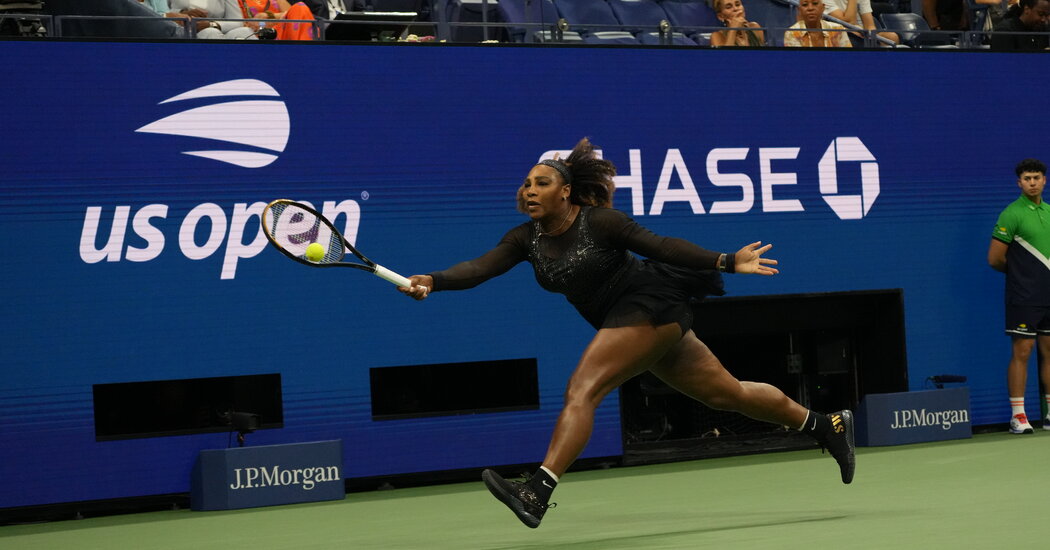 The U.S. Open threw the closest thing to a farewell celebration that Serena Williams would allow for her opening-round match Monday night. But if a party was all that the 23-time Grand Slam singles champion wanted, she could have thrown herself one and skipped all those hours of sweat on the hard courts back home in Florida.

Williams did not come to New York simply for a ceremonial send-off, to listen to another series of elegies about how she has changed this sport and so much else, how she has broken down barriers and paved the way for the next generation of Black tennis stars and female athletes, and the one after that, too. She knew all of that, better than anyone.

There is another legacy that Williams possesses as much as all the others — as one of the world’s great competitors. And she came to New York to compete in a Grand Slam tournament, seemingly her final one, to once more put her best on the line against the finest players in the world on the sport’s biggest stage.

She got that and more on Wednesday night as she won, 7-6(4) 2-6, 6-2, outlasting Anett Kontaveit of Estonia, the world’s second-ranked player, an opponent who, like Williams, loves nothing more than blasting tennis balls as she tries to overwhelm whomever is standing on the other side of the net.

If that first appearance two nights earlier was about posterity and sweet send-offs, about a former U.S. president and music and movie stars coming out to see and be seen, round two was about doing everything possible to win a tennis match in front of a whole new gallery of boldface names, like Tiger Woods, who sat in Williams’s box, and Zendaya, and some 23,000 other very partial observers at Arthur Ashe Stadium.

“There’s still a little left in me,” she said on the court when it was done.

“I love a challenge, I love rising to the challenge.”

Williams will face unseeded Ajla Tomljanovic in the third round on Friday.

No matter who prevailed, this was never going to be a match with much subtlety. It was a showdown between two players who, when they are on, are among the best ball-strikers in the world, and two players at the opposite ends of the sport.

In front of another capacity crowd, one of them, (assuming she keeps her word), was playing to extend the greatest career in modern tennis, and to show her daughter, Olympia just what she is capable of. Olympia was turning 5 on Thursday and showed up to this tournament in the iconic beads her mother wore the first time she began to rule this sport on this same stage.

The other was attempting to get one thing that every young player wants — the chance to tell her grandchildren that on a magical night in the biggest stadium in the sport, she beat the greatest player of all time.

The U.S. Open could be the tennis star’s last professional tournament after a long career of breaking boundaries and obliterating expectations.

Ultimately, a battle like that, especially on this court, was going to be better than any tribute video even her friend Spike Lee, the award-winning filmmaker, could make. And he made a pretty good one that welcomed Williams, in her bedazzled shoes and dress and hair and warm-up jacket, onto the court once more. Wouldn’t it?

This idea, that Williams could somehow turn what two weeks ago was shaping up to be one ceremonial goodbye match into top-level sport, began to take shape in the last games of her Monday-night win, when she started rolling those patented forehands and surging forward for those patented swinging volleys. Suddenly Danka Kovinic of Montenegro was like so many other overmatched first-round victims during the height of Williams’s powers.

But for a few shaky swings early on, Williams essentially picked up where she had left off, reeling off deep forehands that had Kontaveit backpedaling and crushing serves that darted onto the lines.

She hustled into the corners to dig out shots with swings of desperation. She brought the sound effects, too, the warrior grunts, screams of “Come on!” and sneakers screeching across the pavement on every pivot and twist.

Williams finally notched the first service break in the ninth game, on her sixth break point, sending a crowd that had been revving up all night into its first eruption. But Williams frittered the prosperity and failed to serve out the set.

Two games later, the players headed into a tiebreaker that stayed even until Williams grabbed a 5-3 lead as Kontaveit netted a drop shot. A service winner got Williams to set point, and an ace clinched it, sending a roar up through the open rectangle of the Ashe roof.

Kontaveit is not known as the steeliest of competitors, especially in the biggest tournaments. She has made the quarterfinals of a Grand Slam tournament just once.

Maybe everyone in the building wanted her to go away for the night, but Kontaveit was having none of it. Instead she pounced, breaking Williams’s serve three times to send the match to a decisive third set, as an awkward murmur rolled around the stadium as Williams headed off the court for a brief bathroom break.

For Williams, there was nothing awkward about it all. This sort of competition is what she came for, what she has been doing since she was a little girl, and the thing that makes her so ambivalent about leaving the sport and what she will miss most. She can still hang with the best even after playing just five matches in 14 months entering Wednesday.

And that is exactly what she did, and then some. Maybe if Williams and Kontaveit had their last set unfold on some random tennis court in an empty park, things might have gone another way. But it didn’t. Elite competition against a magical backdrop almost never does, and Williams, a star made for the bright lights, probably would not have much use for it if it did.

Kontaveit gave her very little, other than a few short serves that Williams jumped on to notch two early service breaks on her way to a 4-1 lead. Williams had to take everything else, her chest and shoulders rising and falling as she tried to catch her breath between points against an opponent who was never going to go away on her own.

Serving at 4-2 with a point to win the game after nearly letting Kontaveit draw even, Williams sent a topspin lob that caught the back of the baseline and sent Kontaveit to the back wall, barely able to get her own lob back. Williams met it mid-air in the middle of the court for one more swinging volley winner to get to 5-2. It would be the second-loudest roar of the night.

There was one more big one to come Wednesday, a few actually as she sat on her chair and soaked it all in. It looks like more are on the way. This is what she came for.

Share
Facebook
Twitter
Pinterest
WhatsApp
Previous articleGetting reservations in NYC has gotten so out of hand that some restaurants are now offering $1,000 NFTs so diners can skip the line
Next articleIt Was Anett Kontaveit Against Serena Williams, and the Crowd