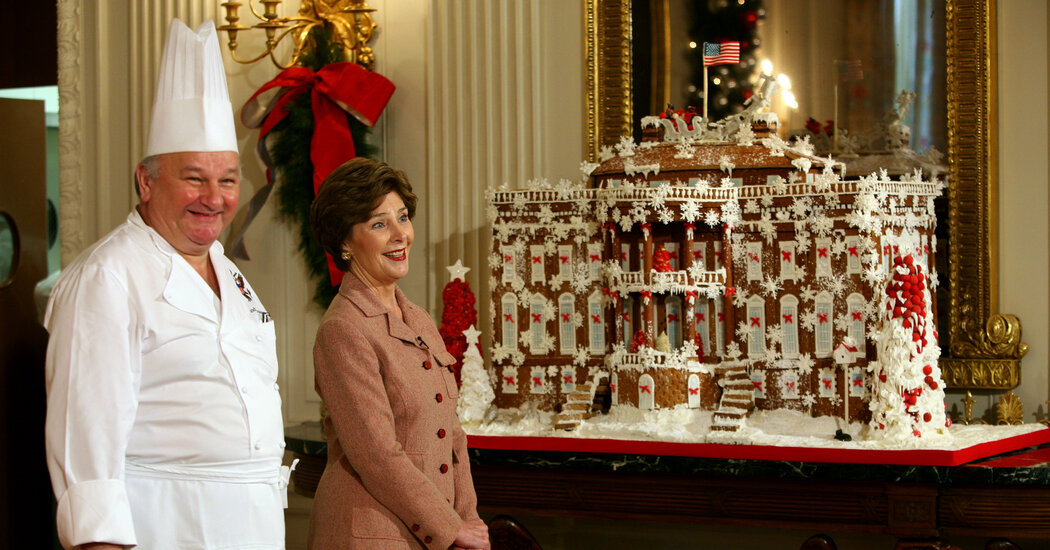 Roland Mesnier, the inventive White House pastry chef whose ambrosial and whimsical desserts briefly shifted the weight of office from the minds to the stomachs of beleaguered presidents, recalcitrant congressmen and balky diplomats, died on Friday at an assisted living home in Burke, Va. He was 78.

The cause was complications of cancer, his son, George, said.

“My role in the White House,” Mr. Mesnier once told The Canadian Press, was “to put a smile on the face of the first family.”

The French-born Mr. Mesnier served as a member of the chief executive’s kitchen cabinet for nearly 25 years. He catered to the idiosyncratic tastes of five presidents, their wives and their guests, an experience he chronicled in several books.

Mr. Mesnier was hired in 1979 by the first lady, Rosalynn Carter, and served until he retired in 2004, during the administration of George W. Bush. He worked from a modest space in the East Wing, armed with about 300 original pastry molds and an eclectic set of tools, including an ice pick, a coat hanger and a tire-pressure gauge.

Despite the president’s background as a legume farmer, he reported, Jimmy and Rosalynn Carter disdained peanuts and sweets in their family’s recipe for a sticky cheese ring — a recipe, Mr. Mesnier said, “that no one tried to steal.” He rated it on a par with Bill and Hillary Clinton’s “atrocious concoction of Coca-Cola-flavored jelly served with black glacé cherries.”

Nancy Reagan often skipped meals but partook of dessert. (She routinely denied her husband chocolate, but Mr. Mesnier smuggled mousse to President Reagan when the first lady was out of town.)

Among Mr. Mesnier’s other culinary observations were that more women than men and more Democrats than Republicans consumed his desserts at White House events, and that a reception for 500 people required some 3,000 pastries.

A dinner for King Juan Carlos of Spain was topped off with a concoction of sherbet in the shape of pears, placed in baskets woven of pulled sugar.

Cookies decorated with images of Big Ben were served at a dinner for Prime Minister Tony Blair of Britain. Blown-sugar giraffes decorated a dessert at a reception for President Mwai Kibaki of Kenya.

In 2001, Mr. Desnier took three weeks and 80 pounds of gingerbread, 30 pounds of chocolate and 20 pounds of marzipan to construct a replica of the 1800 White House for the Christmas holiday.

He sometimes served flaming desserts — but, he said, he gave that up after a woman’s fox shawl caught fire when she leaned across the table at a holiday reception.

As first families became more health conscious, Mr. Mesnier reduced the size of portions and substituted some less caloric ingredients, using egg whites instead of whipped cream and thickening sauces with fruit purée instead of flour or cornstarch.

Roland Robert Mesnier was born on July 8, 1944, in Bonnay, a tiny town in eastern France, where he was raised in a home without electricity. He was the seventh of nine children. His parents, Remy and Marthe Mesnier, worked for the French national railroad.

He hung around his brother’s pastry shop and, when he was 14, apprenticed with a baker in another village.

He earned his professional certification as a pastry chef at 17 and went on to work in Paris, Hanover and Hamburg. After completing three years of military service in France, he was hired at the Savoy Hotel in London.

In 1967, he became a pastry chef at a hotel in Bermuda. It was there that he met his future wife, Martha Whiteford, a teacher from West Virginia who was in Bermuda on vacation.

After seven years there, he was hired by the George V Hotel in Paris. He later returned to Bermuda and, in 1976, immigrated to the United States to work at the Homestead Resort in Hot Springs, Va. In 1979, he heard that the Carter White House was looking for an executive pastry chef.

He interviewed for the job in December, his application for citizenship was expedited, and he began work in February 1980.

He published three memoirs, “All the President’s Pastries: Twenty-five Years in the White House” (2007), written with Christian Malard; “A Sweet World of White House Desserts” (2011); and “The White House in Gingerbread: Memories and Recipes,” written with Mark Ramsdell. He also wrote two cookbooks, both with Lauren Chattman: “Dessert University” (2004) and “Roland Mesnier’s Basic to Beautiful Cakes” (2013).

His wife died in January. In addition to his son, he is survived by two sisters, Genevieve Mesnier-Guyez and Marie Therese Mesnier, and a brother, Bernard Mesnier.

In an online forum, Ask the White House, in 2004, Mr. Mesnier said that with all the foreign treats he had sampled, his own favorite dessert was plain and simple American apple pie, preferably prepared with Rome or Granny Smith apples.

Among the other questions he was asked was which dessert, of all the ones he had sampled and made, he would want to be.

“If I were a pastry,” said the chef famous for his phantasmal creations, “I would like to be a big, fat doughnut.”