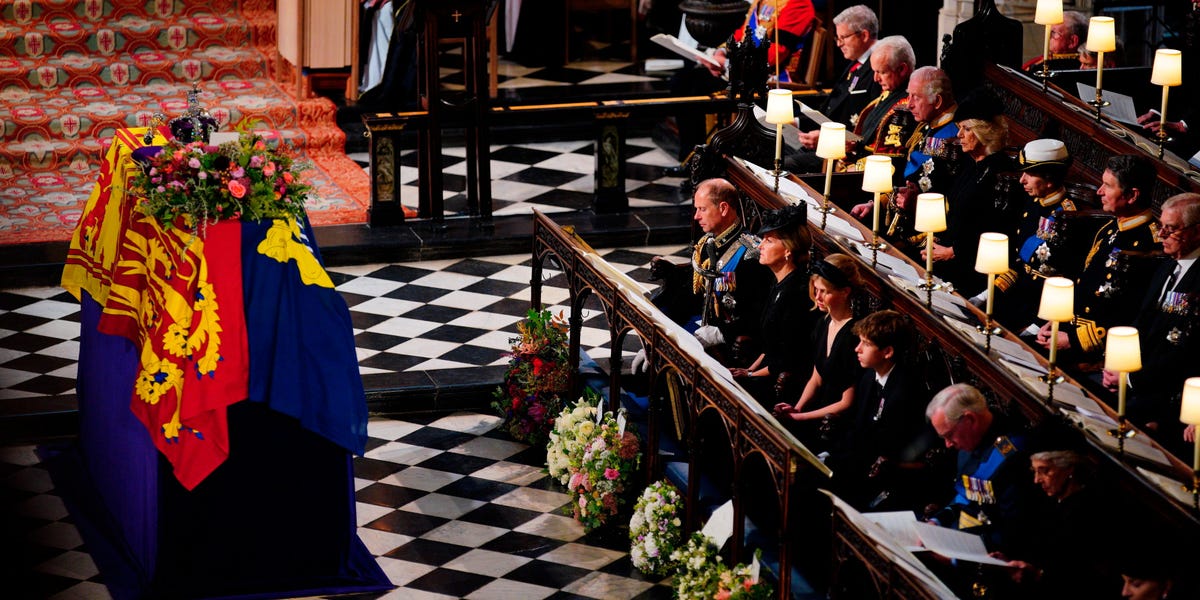 Queen Elizabeth II’s coffin was lowered into the Royal Vault at St George’s Chapel, Windsor, after a state funeral on Monday.

The Queen’s coffin was placed on a marble slab in a section of the chapel known as the Quire, which was then lowered into the vault. The newly-appointed King Charles II and Queen Consort Camilla were among the mourners paying their final respects to the late monarch, who died aged 96 on September 8.

In a statement sent to Insider on Thursday, representatives for Buckingham Palace confirmed that the Queen’s coffin will be buried in the King George VI memorial chapel, the final resting place of her father, King George VI, who died in 1952. Good Housekeeping reported that the chapel was completed in 1969, after which the remains of its namesake were moved there from the Royal Vault.

Also resting there are Queen Elizabeth, the Queen Mother, and Princess Margaret, the queen’s only sibling, both of whom died in 2002 according to The New York Times. Insider previously reported that Prince Philip, who was laid to rest in the Royal Vault after his funeral in April 2021, will be moved to the chapel to be laid to rest alongside the Queen.

A committal service took place at 4 p.m. BST, or 11 a.m. ET, with around 800 guests and was conducted by Dean of Windsor, David Conner, with a blessing from Archbishop of Canterbury, Justin Welby, Buckingham Palace’s statement said. The Queen was then lowered into the vault.

The Queen received a state funeral at 11 a.m. BST, or 6 a.m. ET, in Westminster Abbey, which was attended by heads of state, world leaders, prime ministers, and royal family members.

Also in attendance were almost 200 people who were recognized in The Queen’s birthday honors list earlier this year, the palace statement added.

The state funeral was conducted by the Dean of Westminster. During the service, the UK prime minister and the secretary general of the Commonwealth did readings, while the Archbishop of Canterbury gave a sermon and the commendation. The Dean of Westminster also pronounced a blessing.

Towards the end of the funeral service, a two-minute silence was observed in Westminster Abbey and across the UK.

As outlined in Buckingham Palace’s statement, the Queen’s coffin traveled from Westminster Abbey to Wellington Arch at Hyde Park Corner, and then on to Windsor for the committal service at St. George’s Chapel.

King Charles walked behind the coffin with Princess Anne, Prince Andrew, and Prince Edward just behind him at Wellington Arch. They were followed by the Queen’s grandsons, Peter Phillips, Prince William, and Prince Harry.

Following the stop at Wellington Arch, the coffin was transported to Windsor, Berkshire, where the state hearse traveled in procession to St. George’s Chapel at Windsor Castle via the Long Walk.

Buckingham Palace representatives also told Insider that at 7:30 p.m. BST, or 2:30 p.m. ET, the Queen will be buried with the Duke of Edinburgh in the King George VI Memorial Chapel in Windsor. It will take place in a private service for friends and family, away from the public eye for the first time in her 70-year reign.