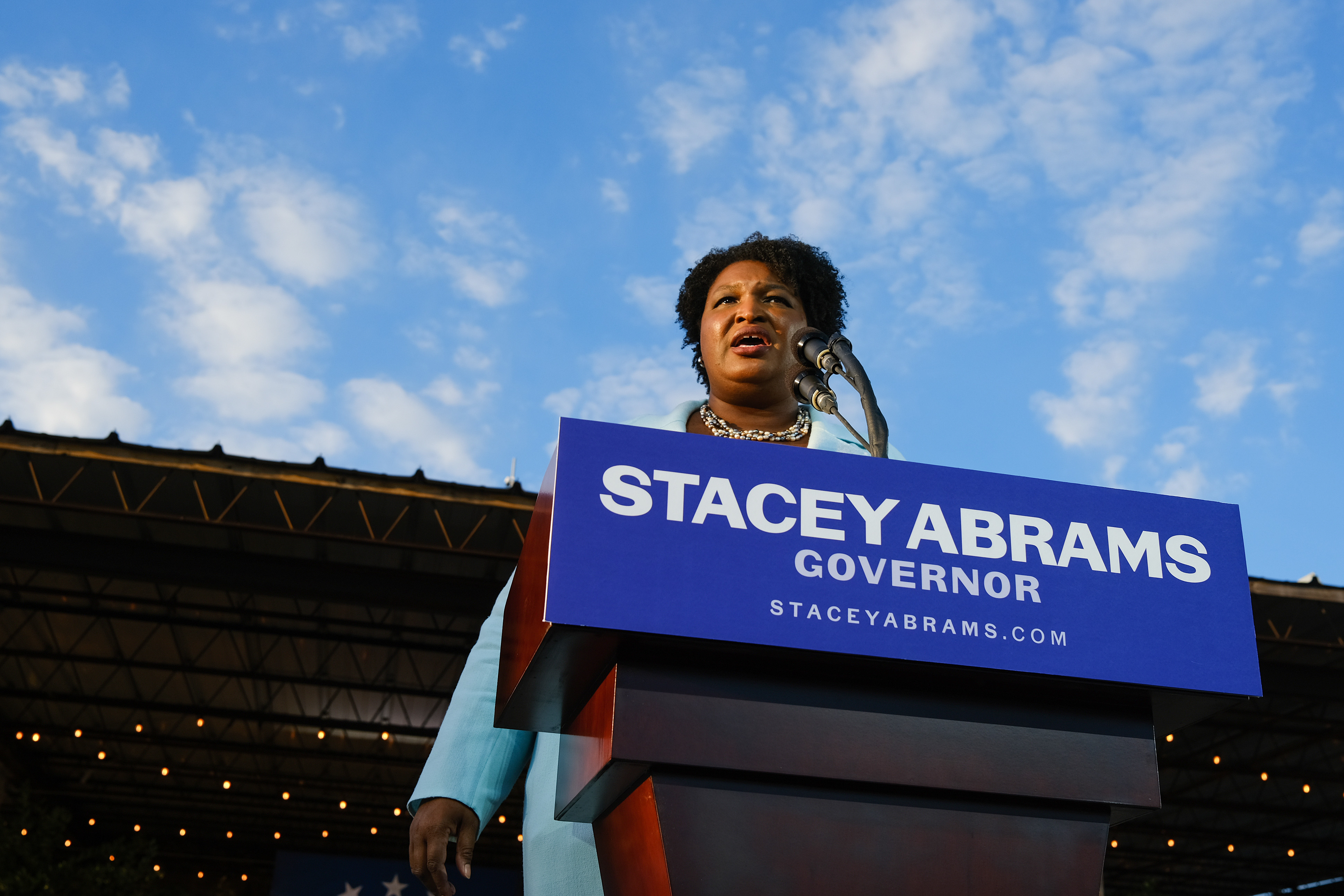 The narrative about her has been that, unbowed and undefeated, she’s fighting a righteous battle against the voter suppression that denied her her rightful victory the first time around, and — as a charismatic figure of unbounded talent — she’s heading for bigger and better things than narrow defeats in statewide elections.

As it happens, she may be headed for an even less narrow defeat in exactly the same statewide election. Come November, she may look more like Beto O’Rourke than Barack Obama.

There’s no doubt that Abrams is a talented organizer whose voter registration and turn-out efforts helped move the needle in Georgia. She also has performative ability, and the enthusiastic support of a cadre of loyalists — a category of people that seemingly includes everyone who does a profile of her.

New York Magazine wondered in the headline of its 2019 profile if she’d run for governor, senator, vice president or president — the world was her oyster. Vogue asked, “Can Stacey Abrams save American democracy?” A Washington Post Magazine piece about her famously included an arty, moody picture of her staring off into the distance wearing what looked like the cape of a superhero.

The problem is that all the hagiography never grappled with the reality of her defeat in 2018, instead taking for granted her version that unfair voting restrictions sank her. Nor did it sufficiently take into account what is required to get elected statewide in Georgia as a Democrat in the normal course of things (i.e., when Trump isn’t sabotaging his own side), which is either some crossover appeal or, failing that, genuine once-in-a-generation political talent.

Although you’d never know it reading her press, Abrams hasn’t demonstrated either.

To her credit, she did come close in 2018, but her case against the Georgia election system as a sink of racist voter suppression never made any sense.

Georgia adopted both no-excuse absentee voting and widespread early voting more than a decade ago. The state has had automatic registration since 2016, and allows people to register online.

Turnout in recent elections has been highly robust. In 2018, for instance, it far exceeded the prior midterm election in 2014.

Her specific complaints about the 2018 election don’t hold up, either. She’s made much of precincts closing down across the state. But this wasn’t a state-level or Republican initiative. Counties make these decisions on their own, and it’s usually for budgetary reasons or to get a polling place out of rundown buildings.

She assailed the so-called “use it or lose it” rule that removes voters from the rolls when they become inactive. This wasn’t a draconian or arbitrary provision, though. It used to take about seven years from beginning to end, after someone didn’t vote in multiple elections and didn’t reply to multiple notes; now the process lasts about nine years. (If someone was removed in error, he or she could always re-register.)

She complained bitterly of the so-called “pending” file, an intermediate status if a registration didn’t match a driver’s license or Social Security records. But voters got more than two years to address such issues, and they could still show up and vote with an ID at polling places.

No one bothered to examine any of her claims particularly closely; instead, it simply became Democratic gospel that the election had been stolen from her. When Democratic Sen. Elizabeth Warren hit Kemp for signing Georgia’s election law last year, she said, “The Republican who is sitting in Stacey Abrams’ chair just signed a despicable voter suppression bill into law to take Georgia back to Jim Crow.”

Lately, Abrams has been at pains to soften her claims about 2018, probably worried about seeming like a sore loser and mindful of comparisons with Trump. She said recently, “I refuse to concede [to] a system that permits citizens to be denied access. That is very different than someone claiming a fraudulent outcome.”

In reality, it’s not that different. It’s true that she hasn’t alleged that anyone double-counted votes or that Venezuela tampered with the machines. When she says, though, in her book, that Kemp is “a racist demagogue who carefully disenfranchised hundreds of thousands of Georgians,” and the state “slashed voters from the rolls, ensured thousands could not cast ballots, and blocked thousands more from being counted,” she’s obviously calling into question the legitimacy and fairness of the election.

The cataract of attention Abrams got in the wake of her first gubernatorial run must have been gratifying — who doesn’t welcome gushingly positive press? — yet it has surely played into her struggles this time. In 2018, she was a fresh figure; now she’s well-defined as a national progressive celebrity, a status that would be an unalloyed benefit in California or New York, but not in Georgia.

It would take considerable deftness to work around this, and instead Abrams has added to her problems.

The MLB pulling the All-Star game out of Atlanta because of the new voting law put her in an awkward spot. She didn’t support boycotts of Georgia in response to the law.

In a USA Today op-ed, she wrote, “Boycotts are complicated affairs that require a long-term commitment to action. I have no doubt that voters of color, particularly Black voters, are willing to endure the hardships of boycotts. But I don’t think that’s necessary — yet.”

The problem, though, is that if you use your platform and credibility to depict your state as the home of hideously racist voter suppression, it’s hard to expect corporations that are hyper-sensitive to charges of racism not to react.

On the other hand, for whatever reason, Abrams also found a way to be somewhere else when Joe Biden came to the state to give a major address on her signature issue of voting rights last year.

Whether she just wanted to avoid associating herself with Biden, or didn’t want anyone else stealing her thunder on the issue, it was a strange, too-clever-by-half choice.

More consequently, she recently deemed Georgia the “worst state in the country to live.” Her stab at cleaning it up was to call the remark “inelegant,” which is a euphemism for an unforced error that from the moment she uttered it was clearly going to dog her every single day going forward. And so it has.

In recent polls, she’s been trailing by as little as 2 points or as many as 11. A couple of weeks ago the New York Times ran a piece headlined, “Democrats Fret as Stacey Abrams Struggles in Georgia Governor’s Race,” perhaps the harshest thing that’s been written about her in a mainstream national publication.

The Times examined various reasons she might be under-performing, including the effects of sexism. That idea feels like a test-run of what will be a new excuse — and not a very plausible one, given that neighboring Alabama has a female governor — if Abrams again doesn’t make it over the top.

A more legitimate reason is that she’s running against Kemp, an entrenched incumbent who has proven himself an incredibly deft politician. How many Republican officials have frankly defied Trump, as Kemp did after the 2020 election, and lived to tell the tale? (The next time, by the way, that Kemp poses in a photo shoot for a flattering profile in Vanity Fair or Teen Vogue will presumably be the first.)

Toppling him was never going to be easy, but it’s such challenges that make genuine political stars.