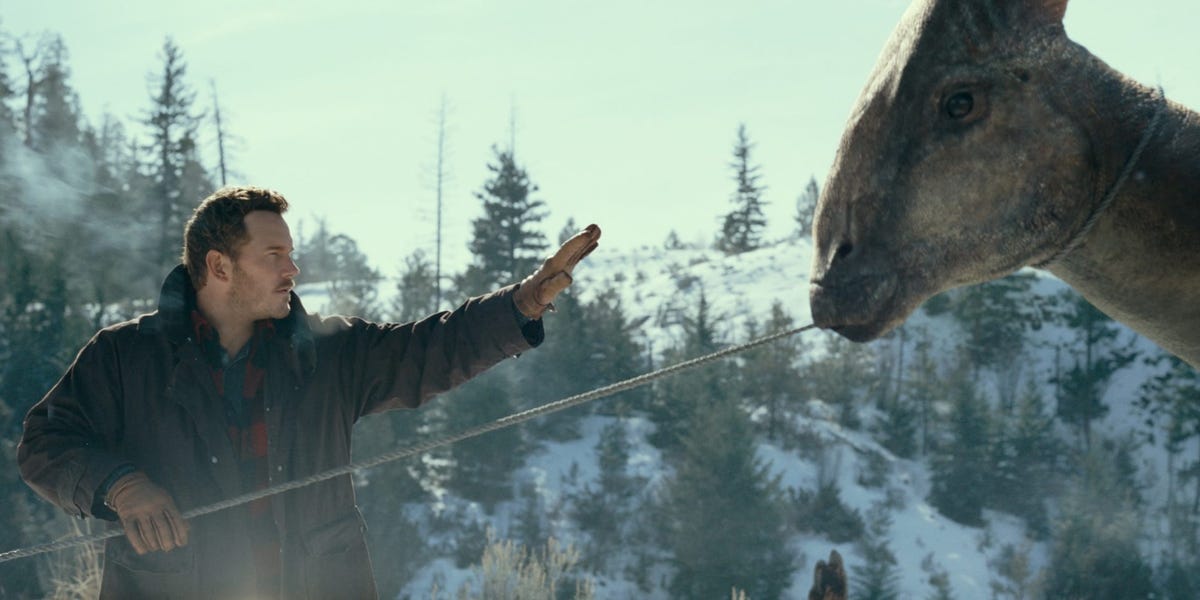 It took over three months, but “Jurassic World Dominion” crossed $1 billion worldwide. The sequel likely crossed the number thanks, in part, to the original “Jurassic Park” cast returning to the big screen and teaming up with the newer “Jurassic World” cast in this entry.

Back in July of 2008, people began speculating that Christopher Nolan’s “Batman Begins” sequel starring Heath Ledger as the Joker might have the box-office power to set a world record.  “There are even whispers starting whether ‘Dark Knight‘ can beat the incredible worldwide numbers posted by the all-time $1.8 billion benchmark of ‘Titanic,'” Deadline reported.

At the time, the film broke several box-office records, including highest-grossing opening weekend, highest Friday midnight showings, and highest-opening day record. “TDK” went on to become the highest-grossing movie of 2008.

The film’s successful viral marketing campaign and box-office performance really set the bar for what a superhero movie could be. Many consider it a blueprint for the success of superhero movies that came afterwards. Unfortunately, instead of DC catapulting into the stratosphere from here on out, Marvel took the lead, appearing on this list 10 times compared to DC’s four.

When Peter Jackson’s first “Hobbit” movie crossed the $1 billion mark, it looked like a good indication that the subsequent two sequels would perform equally well, if not better, at the box office.

But neither of the second two “Hobbit” films wound up crossing that box-office landmark. Both “The Desolation of Smaug” and “Battle of the Five Armies” grossed around $960,000,000 each.

Nineteen years after it’s initial 2001 release, “Harry Potter and the Sorcerer’s Stone” managed to cross the $1 billion mark only after it was given a theatrical re-release in China.

Deadline reported that the movie had grossed $13.6 million over the course of three-days after it was released in theaters with a “remastered 4K 3D” version. It’s the second movie in the “Harry Potter” franchise to gross more than $1 billion.

Moviegoers flocked back to theaters in the summer of 2016 for Disney Pixar’s “Finding Nemo” sequel. It was the second animated feature of 2016 to pass the $1 billion mark (“Zootopia” is the other). At the time, the box-office numbers also made “Finding Dory” the fifth highest-grossing animated movie of all time.

“Despicable Me 3” was a sleeper hit of 2017. With the return of Gru, Lucy, and of course the Minions, this is the second movie in the franchise to gross over one billion dollars. The introduction of “South Park” co-creator Trey Parker as a new villain was clearly a smart move.

Like many of the Disney live-action versions of animated classics, “Aladdin” did very well at the box office. “Aladdin” became one of Disney’s record-breaking seven movies to hit $1 billion in 2019.

“Rogue One” cemented its place in the “Star Wars” franchise by raking in $1 billion just 39 days after its global release. The spinoff became the fourth and final movie of 2016 to make $1 billion at the box office. It’s also worth noting that all four billion-dollar movies of 2016 were Disney releases.

The 1994 Disney Oscar-winning picture grossed $968.5 million by the end of its theatrical run. Several rereleases of the film helped push it over the $1 billion mark.

Back in 2006, when the sequel to Disney’s “Pirates of the Caribbean: Curse of the Black Pearl” hit theaters, it took just three months for the movie to make $1 billion at the box office. At that time, it was the third ever film to do so.

The ninth episode in the “Star Wars” Skywalker saga, “The Rise of Skywalker,” crossed the $1 billion mark on Tuesday, January 14.

As reported by Variety, it took this film 28 days to hit this milestone, while “The Force Awakens” did it in 12 days and “The Last Jedi” managed it in 19 days.

Similar to “The Phantom Menace,” a 3D re-release is responsible for putting “Jurassic Park” over the edge and into the $1 billion club. “Jurassic Park” wasn’t originally released in China in 1993, according to a report from The Wrap. But the 20th anniversary international re-release included China — and the difference in ticket sales showed.

A few more pandemic re-releases in 2020 and 2022 helped send it up the chart even more.

“Captain America: Civil War” was a blockbuster hit in 2016, and the first movie of that year to rake in $1 billion. The wild success of Cap’s third outing came from it playing more like an Avengers film thanks to a large superhero roster, including Iron Man, and the introduction of Tom Holland’s Spider-Man.

The 2015 prequel to “Despicable Me” focused only on the overall-wearing Minions the world had come to love. People clearly appreciated the yellow henchman’s standalone film, since neither of the two “Despicable Me” movies have breached $1 billion.

Pushing back Tom Cruise’s “Top Gun” sequel two years during the pandemic was the right move for Paramount. Far superior to the original with an actual focus on the Top Gun training program instead of a romance, the film became the second pandemic movie to cross $1 billion.

The film’s Memorial Day opening weekend of $248 million worldwide became Cruise’s career-best passing 2005’s “War of the Worlds” ($64.9 million). The movie has had massive staying power at the box office for 10 weeks and counting, only dropping 29% in its second weekend. (Usually, films will drop around 50% in week two.)

Its $709 million at the domestic box office makes it the fifth highest-grossing domestic film of all time ahead of “Black Panther” and “Titanic.” “Maverick” is currently the highest-grossing movie of 2022. For its success, Cruise is getting at least a $100 million payday.

Following the trend of some other franchises in our top list, the final “Harry Potter” film was the only one of the bunch that raked in $1 billion or more until “Sorcerer’s Stone” was given a theatrical release in China.

“Transformers,” “The Dark Knight,” and “Pirates of the Caribbean” are three franchises which each have two movies in the billion dollar club — and you can add “The Avengers” to that list.

The 2015 follow-up ensemble movie added James Spader as the terrifying new villain, and (surprising no one) “Age of Ultron” opened in the number one spot around the world.

After just under three weeks in theaters, Disney’s remake of “The Lion King” crossed $1 billion dollars in total box-office gross. This was the fourth movie of 2019 to join the billion-dollar club.

The first three were “Spider-Man: Far From Home,” “Avengers: Endgame,” and “Captain Marvel.”

Spider-Man broke the pandemic curse. “No Way Home” became the first film since 2019’s “The Rise of Skywalker” to cross $1 billion at the box office. The Tom Holland-starring film crossed $1 billion in just 12 days and become the highest-grossing movie of 2021.

According to Forbes, it’s only the fifth film to cross $1 billion without a China release. If it ever does open there, it will likely cross $2 billion.

The seventh movie in the “Star Wars” franchise broke the “Jurassic World” records when box-office numbers tallied $1 billion after only 12 days. And it didn’t stop there — “The Force Awakens” went on rake in more than $2 billion, solidifying its number four spot on our list and becoming the highest-grossing “Star Wars” movie of all time.

Marvel’s major endcap to its run of 22 comic-book based films broke the record for fastest movie to reach one-billion dollars in international box-office totals. On the Sunday of its opening weekend, Disney estimated “Avengers: Endgame” had made $1,209,000,000 within the first five days of its global debut.

It became the highest-grossing movie of all time until Disney re-released “Avatar” in China in 2021.

With more than $2.7 billion in box-office revenue, James Cameron’s “Avatar” was miles ahead of other films on the list.

Disney’s epic Marvel adventure “Avengers:Endgame” knocked it out of the top spot in the summer of 2019. However, “Avatar” retook the top spot when Disney (which now owns the rights after the Fox acquisition) re-released the film in China in spring 2021.

Now that Disney owns the rights to the two highest-grossing movies of all time, the company has the power to control which movie is in the top spot by simply re-releasing either film whenever it benefits the Mouse. Don’t be surprised with more “Avatar” re-releases as the long-awaited sequel hits theaters this December.

The best air fryers for your home and kitchen