One of WWE’s most powerful execs chuckled when Logan Paul said he wanted to wrestle. No one is laughing now. 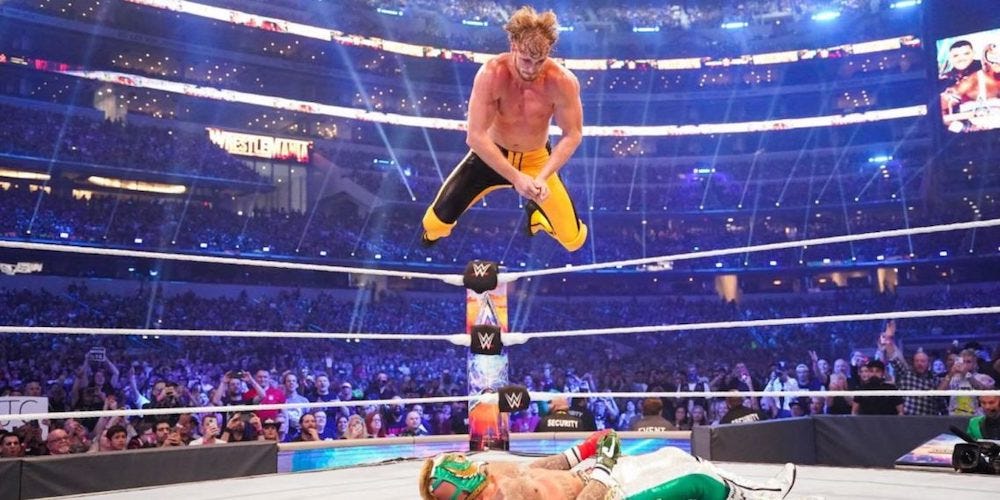 LAS VEGAS — One of the WWE‘s most powerful figures, Paul Michael Levesque, laughed to himself when he first heard that internet celebrity Logan Paul wanted to try his hand at pro wrestling.

Now, with Paul headlining an event against WWE superstar Roman Reigns on the horizon, Levesque — better known as Triple H — is no longer laughing.

The WWE’s chief content officer, head of creative, and all-time great former wrestler told Insider, at a recent press conference at Resorts World in Las Vegas, that Paul has since surprised him.

He’s surprised him so much that he’s entrusted him with the spotlight at the November 5 show Crown Jewel in Saudi Arabia.

“When it was first brought to my attention that Logan Paul was a huge WWE fan, that they were massively into the product, and had an interest in doing something with us, I have to admit, hey, I chuckled to myself,” Triple H said.

“I thought, if these guys want to come in here, they’re probably going to be like every other celebrity that comes in here with the exception of a few.

Paul has only performed for the WWE a handful of times but company insiders told us that they consider him a natural.

“Logan was a guy that came in, talked to us about it, and … he put in the work, on the grind,” Triple H told Insider.

“Every day, he was in the gym. I was getting videos and updates about what he was putting himself through to do this. I was impressed. Still skeptical, but impressed.”

Over time, Triple H altered his stance on Paul, who continually appeared to over-deliver in the ring.

From selling a stunner from Kevin Owens in April 2021, brawling with The Mysterios, and nailing a frog-splash on The Miz at SummerSlam in 2022 — Paul has a performance level that seemingly matches his ability on the mic.

“This is a guy who earned my respect,” added the 53-year-old sports business exec. “In this business, I do not give my respect very easily. He has earned that while he is here.”

Logan Paul is used to proving his doubters wrong

After getting mobbed by young fans at the WWE’s midday event on the Las Vegas Strip, Paul was ushered backstage, where he spoke to Insider about his journey.

Beginning his career on Vine, Paul has become one of the most subscribed-to creators on YouTube. In 2018 he crossed over into boxing for a YouTube match against KSI, lured Floyd Mayweather into a boxing exhibition last year, and is now headlining a marquee WWE event.

At various points in his life, he’s been laughed at. So the Triple H reaction came as no surprise. But someway, somehow, it’s Paul who is the last one laughing.

“You can’t pretend that the people who tell me I can’t do things aren’t completely insane,” Paul told us.

“But, yeah, I say a lot of stuff. Then I attack, and that’s the difference,” the 27-year-old added. “A lot of people just say stuff. I’m an executionist. That’s what I do.”

For Triple H, there’s now a question of whether Paul has “bitten off more than he can chew.”

The WWE figurehead told us Paul has “worked his ass off” to get to where he is on the big show. However, “it remains to be seen” whether he can pull it off against Reigns next month.

We asked Paul whether nerves are settling in, and if he thinks he’s bitten off more than he can chew. “Hell yeah, dog,” he told us.

Paul says he has been working to prepare at the WWE’s Performance Center in Orlando.

“I love the in-ring physicality — it’s my favorite, and why I do this sport,” he said. “Like, if I had just had to do promos and speak on the mic, I wouldn’t be here.

“I love the physicality,” said Paul. “That’s where I’ve earned the respect, and I earn it because I’d be showing up to the Performance Center and I train day after day.”

Paul is so committed, he says, that he’s having a WWE ring shipped to his house in Puerto Rico so he can train regardless of whether he’s at home, or on the grind in Florida.

“I’m dedicated to practicing all the time so I can become the best,” Paul said.

Logan Paul is Triple H’s first big gamble in the WWE, the creator told us

Insider has reported previously about how the WWE, in the post-Vince McMahon era, has been undergoing a transitional period.

Triple H reportedly led a decision to focus on their own thing, rather than replicating what McMahon was doing.

The transition has been to veer away from sports entertainment and focus on wrestling.

The WWE’s latest star said he, at first, had “an eerie feeling” that what he does “will be an earmark on Triple H’s effect on the WWE.”

However, this ended up being a way he motivated himself. “I have to show up, right?”

Paul said: “I think I’m just, like, the first big bet for the company” since McMahon’s retirement amid disgrace in July.

“This is a new direction, there’s a new guy in charge, and he picked me,” he said.