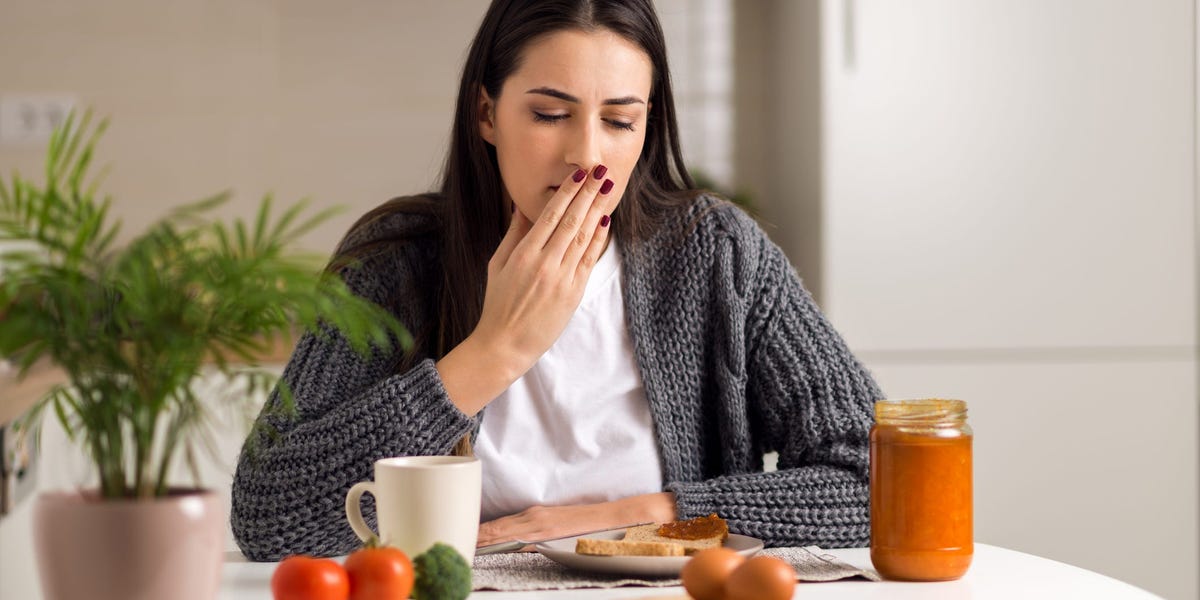 Most people have felt nauseous at some point in their life — the queasy, upset feeling in your stomach that may make you feel like vomiting.

For some, this uncomfortable sensation occurs after eating, usually 30 to 60 minutes following a meal, and it may last one to three hours, says Jesse P. Houghton, MD, FACG, the senior medical director of Gastroenterology at SOMC Gastroenterology Associates.

If you do experience nausea after eating, here are seven of the most common causes and how to properly treat it.

Nausea during pregnancy doesn’t just happen in the morning, it can also occur after lunch, dinner, and snacks.

That’s because pregnant people produce the hormone human chorionic gonadotropin (HCG), which comes with nausea as a side effect.

“The rise of estrogen or the change in the balance of the bacteria in the gut during pregnancy could be another reason nausea after eating increases,” says Niket Sonpal, MD, an internist and gastroenterologist.

It’s well known that food poisoning can cause nausea. These foods are contaminated with either a virus or bacteria which disrupts the GI tract triggering nausea and, oftentimes, vomiting, says Houghton.

Usually, bacteria that cause food poisoning die when exposed to temperatures higher than 140 degrees Fahrenheit. That’s why pre-packaged and raw foods, like salad, fruits, and undercooked meat are common culprits of food poisoning since they’re uncooked, says Sonpal.

If you are also experiencing diarrhea, fever, vomiting, and stomach cramps, your nausea is most likely due to food poisoning.

When you eat something you are allergic or have an intolerance to, your body’s immune system responds with chemicals, like immunoglobulin E (IgE) and histamine, that can cause symptoms such as nausea, says Sonpal.

The most common food allergies are:

If you think your nausea is due to an allergy, get tested by an allergist who can help you determine which foods may be to blame.

Gastroesophageal reflux disease (GERD), aka acid reflux, occurs when stomach acid flows up into the esophagus, inflaming it, which can trigger nausea, says David D. Clarke, MD, a clinical assistant professor of Gastroenterology Emeritus and assistant director at the Center for Ethics at Oregon Health & Science University.

If you are also experiencing heartburn, difficulty swallowing, chronic coughing, and disrupted sleep, your nausea may be due to GERD.

Note: GERD is not life-threatening, but continued esophageal inflammation can lead to more serious problems like esophagitis and could require further treatments and even surgery.

“There is no exact cause of an IBS flare-up. However, most symptoms, such as vomiting, tend to worsen after consuming food that is difficult to digest,” says Sonpal. “Sometimes IBS nausea also occurs because of certain trigger foods, medications, or stress.”

Most variations of gallbladder disease result in nausea after eating. That’s because the organ works to push bile into the small intestine and help digestion.

Medical term: Gallbladder disease is any condition that affects the gallbladder. Examples include cholecystitis, gallstones, and gangrene.

“If the flow of bile is obstructed, for example by a gallstone, the resulting stretch on the gallbladder or its associated ducts can lead to nausea,” says Clarke.

Other signs of gallbladder disease include:

If you experience any of the above symptoms, visit a doctor who can diagnose you and provide proper treatment. Gallbladder disease is rarely a life-threatening condition.

As if stress and anxiety aren’t enough to deal with on their own, these mental health issues can also cause gastrointestinal problems like nausea or diarrhea.

“Stress hormones can affect how our GI tract contracts, either slowing it down or speeding it up,” says Houghton.

To determine if anxiety is causing your post-meal nausea, keep a journal of when you feel anxious and when you are nauseous. This way you can notice any patterns between the two.

Techniques to reduce stress include:

How to reduce nausea

Factors such as pregnancy, IBS, and stress can cause people to become nauseous after eating.

According to Clarke, you should see a doctor if:

If you are experiencing nausea after a meal, try chewing on ginger, slowly drinking cold water, or limiting your activity until the feeling passes.