Moosewood, the Beloved Vegetarian Restaurant, Prepares for Its Second Act 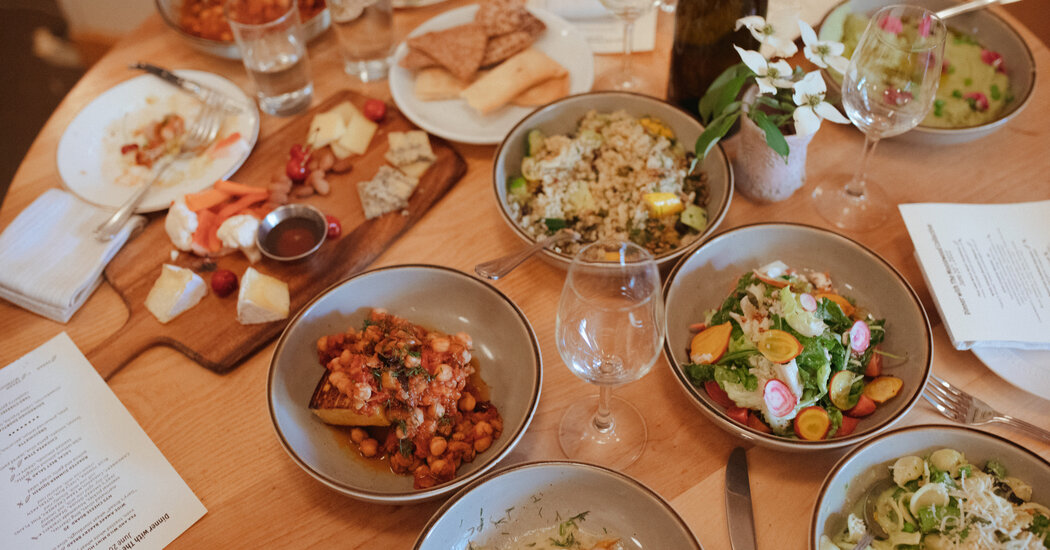 ON A WARM evening earlier this summer, 16 of the 19 former owners of the Moosewood Restaurant in downtown Ithaca, N.Y. — widely acknowledged to be the country’s longest-running vegetarian restaurant — sat around three tables in its newly renovated main dining room and feasted on a flurry of family-style dishes. To start, there were boards loaded with local cheeses, pickles, Bing cherries and housemade crackers, bites from which were enjoyed with glasses of cold sparkling wine from Lakewood, a local vineyard. Wafting from the kitchen was the smell of sautéed onions, saffron and tomatoes, the makings of a chickpea stew that was served over seared panisses along with plates of white bean and fresh pea hummus garnished with edible flowers. The energy was jubilant — while most of those in attendance had been working together for decades, they hadn’t gathered as a group like this in years — and the music, “The Bowie Variations” (2011) by the pianist Mike Garson, was just right.

Moosewood was opened by seven food-loving vegetarian friends in a tiny storefront within a former schoolhouse in 1973, a year in which America was pulling out of Vietnam, Nixon’s presidency was falling apart and Roe v. Wade came into law. The country was also in the midst of a back-to-the-land movement that saw droves of young people move from cities to rural areas to experiment with communal living and for which Ithaca and the rest of the Finger Lakes region were a hub. The restaurant was an outgrowth of the impulse to build new systems and communities, all the more so after the original seven owners decided to pursue other careers in the late ’70s and the cafe’s dedicated staff stepped in and turned Moosewood into a hierarchy-free collective. “We wore T-shirts that said ‘worker managed, worker owned,’’’ recalled Wynnie Stein, who came aboard in 1984. “Anyone who was a consistent employee and willing to take on all the jobs had the possibility of joining.”

A number of the members also helped found Lavender Hill, a nearby gay and lesbian commune, and made a point of fostering a similarly inclusive atmosphere at the restaurant. “Moosewood was always a place where you could be yourself,” said David Hirsh, an early member of Moosewood who still lives at Lavender Hill. Eliana Parra, another longtime member, arrived in Ithaca as a political exile from Chile. But just because it was a place that lived by its values doesn’t mean it wasn’t also a rigorous one. “We weren’t a bunch of hippies cooking vegetables. We were working hard and innovating the industry,” said Stein.

Members took turns collecting, cooking and tweaking recipes for dishes from their own backgrounds, as well as from the cuisines of countries that inspired them — anything from zucchini-feta pancakes to a Cuban black bean soup. “It always came down to two things: Every dish had to be really delicious and really comforting,” said Stein, who researched and experimented with a number of recipes from her Jewish friends and family members. She also led efforts to create a Moosewood-branded line of frozen meals made with healthy ingredients — long before it was de rigueur, the collective believed strongly in supporting local farmers. Eventually, they created Sundays at Moosewood, a dining series wherein each event featured a menu influenced entirely by one country, which continued for more than 30 years.

Knowledge of the restaurant spread through word of mouth and through “The Moosewood Cookbook” (1974), its now-iconic cover featuring a handful of essentials (a leaf of kale, a slice of orange, a single radish) illustrated by its primary author, Mollie Katzen, another early collective member. It includes delicious and sometimes dairy-heavy recipes for eggplants stuffed with mushrooms, onions, brown rice and Cheddar cheese; custardy popovers; curried butternut squash soup; and much else. And it remains one of the top-10 best-selling cookbooks of all time, having sold more than two million copies since it was first published in 1974. (If you’ve had a mushroom moussaka or a cauliflower-cheese soup anytime since the mid-70s, it’s likely that the cook was indebted to the book.) At a time when most popular restaurants were serving steak and potatoes or heavy French cuisine, and when most home cooks didn’t even know what tahini or tofu was, Moosewood marked a real shift. As Christine Muhlke, a New York-based food writer and consultant, says, “They changed the way Americans think about food and introduced a lot of ethnic recipes and ingredients into the country’s repertoire. It’s a seminal American restaurant right up there with Chez Panisse.”

THE WEIGHT OF the restaurant’s history isn’t lost on Danica Wilcox, who, along with her husband, Nicholas Woods, and their friend and business partner Eric Rosenfeld, is one of Moosewood’s new owners — the trio threw the recent dinner at the restaurant to celebrate its past and future. Wilcox’s mother, Kathleen “Kip” Wilcox, became a member of the collective in 1983; she started out washing pots and pans and ended up one of Moosewood’s dessert chefs. For a time, Kip rented an apartment upstairs. Thus Danica spent much of her childhood at the restaurant. “My mom breastfed me in the kitchen,” she said with a laugh. “And when she was recipe testing, I had pissaladière in my school lunch for three months straight.” She says her memories of the place — “the smell of my mother’s brownies, Ned [Asta, an early member] singing along to the Indigo Girls, arranging wildflowers in small ceramic vases for the tables” — are what roused her to take over. In 2019, with most of the members nearing or past the age of retirement, she started trying to help Moosewood find a buyer, one who would be loyal to the restaurant’s principles, until it occurred to her, after a potential successor dropped out during the pandemic, that she was probably the best candidate. So she and Woods, who were living in Mallorca at the time, packed up and headed to her hometown.

They’ve been working nonstop since taking over at the start of this year. In the spring, they oversaw the restaurant’s renovation, ripping up the carpeting and polishing the concrete floors themselves. Woods, an artist who grew up in Spain, designed much of the lighting, including the sculptural standing lights of brass and marble, and the walls are now hung with several of his dreamlike paintings. In the past, the restaurant hosted rotating exhibitions of work by local artists, but, partly because there are now just three owners — “If we decided to partner with anyone else, it would be with a farmer or a winemaker,” Wilcox said — and partly because “the climate crisis is so critical,” she and Woods have decided to focus on the food and on “encouraging people to move toward local sourcing and vegetarianism both for environmental and health reasons.” Not that this should be a tough sell. As Muhlke put it, “After 50 years, the world has caught up to Moosewood.”

Unsurprisingly, then, the restaurant’s food philosophy and offerings will remain much the same, albeit with more vegan dishes. Wilcox, who has worked here and there in catering and spent one summer as a private chef, and Woods have brought on Adam Shafer, formerly of Greens in San Francisco, another landmark vegetarian restaurant, to work as a consulting chef alongside the chef Tim Mooney, who’s been at Moosewood for 16 years. Despite the rising costs of everything from energy to ingredients, the team plans to continue the longstanding convention of providing a daily lunch special of soup, salad and bread. Last week’s options included corn chowder and quinoa with preserved lemon.

After the dessert course of the group dinner — a sourdough strawberry shortcake and a violet-hued taro cheesecake — some of the attendees began to dance to salsa music. “Moosewood is not just a restaurant,” Parra said over her shoulder as she taught Asta and a few others some moves. “It’s a family.” Eventually, the group filed out one by one, but not before packing leftovers into takeaway containers. “It’s a Moosewood tradition,” said Wilcox. “Anyone could take leftovers from the cooler at the end of the night.” It’s another one she intends to uphold.

Share
Facebook
Twitter
Pinterest
WhatsApp
Previous article7 viral kitchen hacks I learned on TikTok that have changed the way I cook
Next articleVenus Williams calls sister Serena ‘the boss’ in their relationship, says she does ‘whatever she tells me to do’