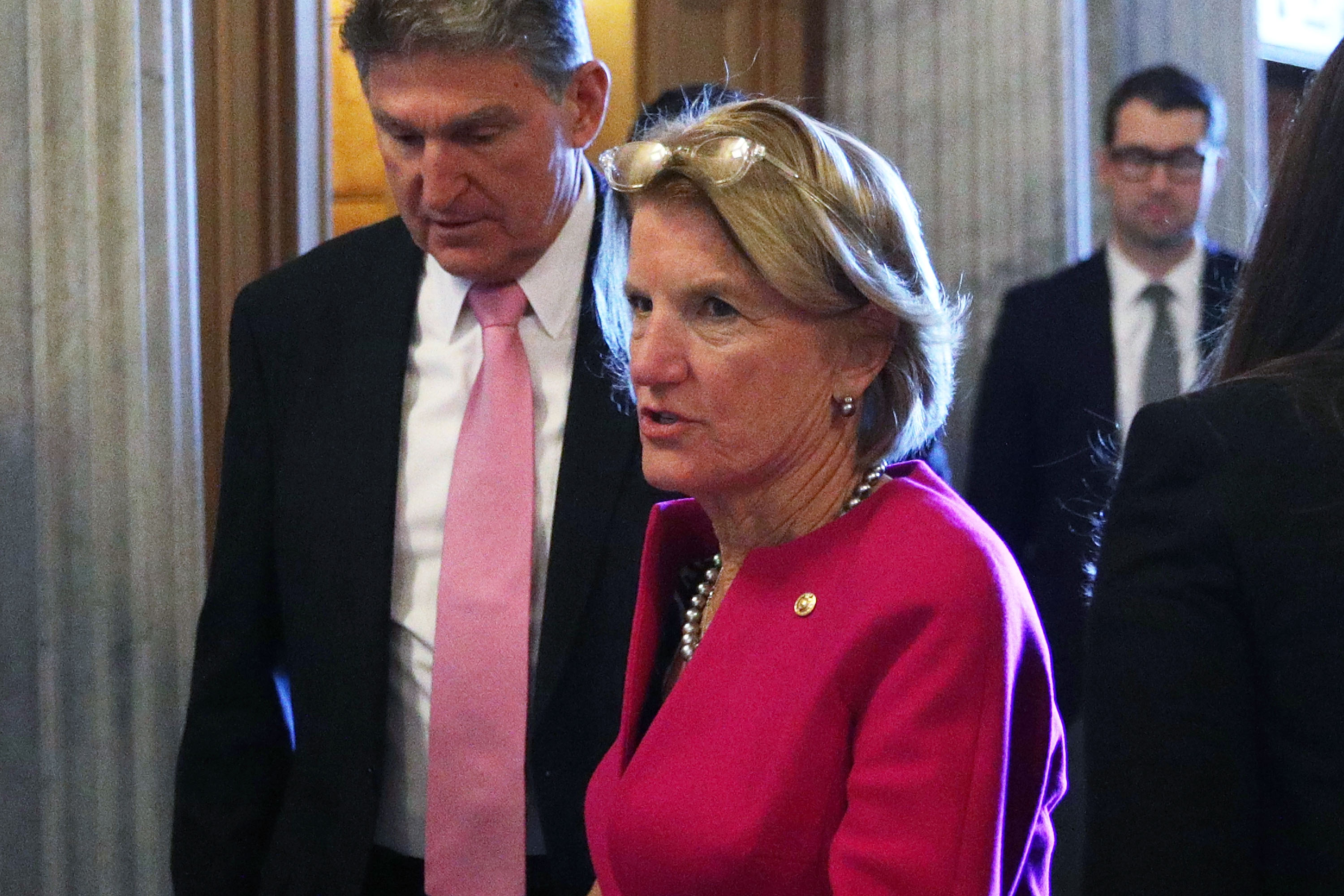 ‘“They have a working relationship just like most of us do. Being on either side of the parties, I’m sure it gets strained every once in a while,” said Sen. Mike Rounds (R-S.D.).

The Democratic centrist Manchin and deal-seeking Republican Capito share a desire to speed construction of massive energy projects. But under political pressure, they’re diverging on the details. Capito has her own bill that would weaken some environmental regulations and has broad GOP support. Manchin dismisses it as a “messaging bill” because it can’t win over Democrats and is racing to finalize a bill that would help renewable as well as fossil-fuel projects.

Their partnership, and the duress it is currently under, is generating plenty of intrigue in the clubby Senate as well as in the press back home in the Mountain State, where a multi-billion-dollar natural gas line would benefit from progress.

Hanging over it all is Manchin’s potential 2024 reelection run in deep red West Virginia and the climate, tax and health care package that he negotiated with Senate Majority Leader Chuck Schumer (D-N.Y.). As part of that deal, Schumer and President Joe Biden agreed to support legislation speeding up consideration of massive energy projects, but now that push is in doubt thanks to Republican opposition in the Senate — and because its text won’t be public until Wednesday.

After Manchin aired hopes last week that Capito would help build Republican support, she declared that she feels “the onus is on me to provide support for something I had no hand in and still don’t know what it is.” She declined to comment this week on the specifics of his permitting bill, instead saying she needs to see it first.

And in a mark of their unique cross-aisle relationship, she said of Manchin: “We’re friends. We’ve known each other forever.”

He allowed that “we disagree” on the specifics of permitting policy: “I understand that and respect it,” Manchin said, describing their relationship as deeper than an energy dispute.

“My friendship with her, and her family and my family, is unconditional. They cannot strain that,” Manchin said. “Do we have political differences? Sure … I would do anything I could to help my friend Shelley Moore Capito. In any situation.”

Manchin got buy-in from Schumer to put his permitting proposal in this fall’s must-pass government funding bill — except he needs at least 10 Republicans to go along in order to avoid a filibuster. And Capito would almost certainly have to be a part of that effort, except she’s frustrated that she’s being tasked with completing a deal she was not a part of.

“She’s been patient with Joe, but this is a step too far,” one GOP senator said, summing up Capito’s view.

“Joe seems like he’s desperately throwing a lifeline out there and hoping she’ll grab it,” said Senate Minority Whip John Thune (R-S.D.). “He and Schumer cut this deal. I think it’s unfair, what he’s attempting to do, to try and paint Shelley into a corner.”

Manchin’s Democratic colleagues don’t blame him for leaning on his bond with Capito to bring his legislation across the finish line. Sen. Jon Tester (D-Mont.), who has worked with both West Virginians, put it this way: “I would do the same thing if I had the kind of relationship that he has with Capito.”

Indeed, the Manchins and Moores run deep as a coal seam in West Virginia. Capito’s father, Arch Moore, was governor for 12 years; her son Moore Capito serves in the state legislature; her nephew, Riley Moore, is the state treasurer and could run against Manchin.

Now Capito is the top Republican on the Environment and Public Works Committee and Manchin chairs the Senate Energy and Natural Resources Committee, allowing the state to punch well above its weight in the Senate. All while Capito is rising in the Senate GOP and is expected to join elected leadership next year, with Manchin serving on the Democratic leadership team and coming off 18 months of unparalleled leverage as he enters what could be his most difficult reelection campaign yet.

Manchin might be Democrats’ last West Virginia senator in a generation, while Capito was the first GOP senator elected in her state since the 1950s. The connection between Capito and Manchin is an animating theme of the 50-50 Senate — and will outlast it.

She led Senate GOP negotiations on an infrastructure bill with Biden, but a bipartisan group that included Manchin ended up cutting a deal on the final product, with Capito’s support. Then she was first out the door with her permitting legislation, which Republicans say is vastly superior to Manchin’s.

On the other hand, it’s clear Capito’s bill on its own wouldn’t have support from 10 Democrats; they already voted it down as an amendment to the party-line bill he helped craft. Her measure would revert back to the Trump administration’s environmental regulations and lacks the provisions to help clean energy projects that Manchin is adding to his bill.

“She’s very smart and knows that there’s no way that that [her bill] would pass a Democratic House. There’s no way to overcome a filibuster and there’s no way the President of the United States would sign it,” said Sen. Brian Schatz (D-Hawaii). “It’s a Koch brothers wish list.”

If they managed to align on permitting, Manchin and Capito both could tout it back home after leaving their fingerprints on nearly every big bipartisan accomplishment that’s become law this year, from infrastructure to gun safety to semiconductor legislation.

But either way, their comity is unlikely to fray for good.

Sen. Roy Blunt (R-Mo.) compared Manchin and Capito’s connection to his own with former Democratic Sen. Claire McCaskill. Both Blunt and McCaskill have a storied family history in Show-Me State politics, and they tried to lay off each other even as partisan politics tested them.

“There’s always a chance that something as big as the Inflation Reduction Act would have a career impact on one, if not both of them. And they may see some friction in that,” Blunt said. “My guess would be that no matter what happens, 10 years from now, they will have a strong personal relationship.”

Josh Siegel contributed to this report.