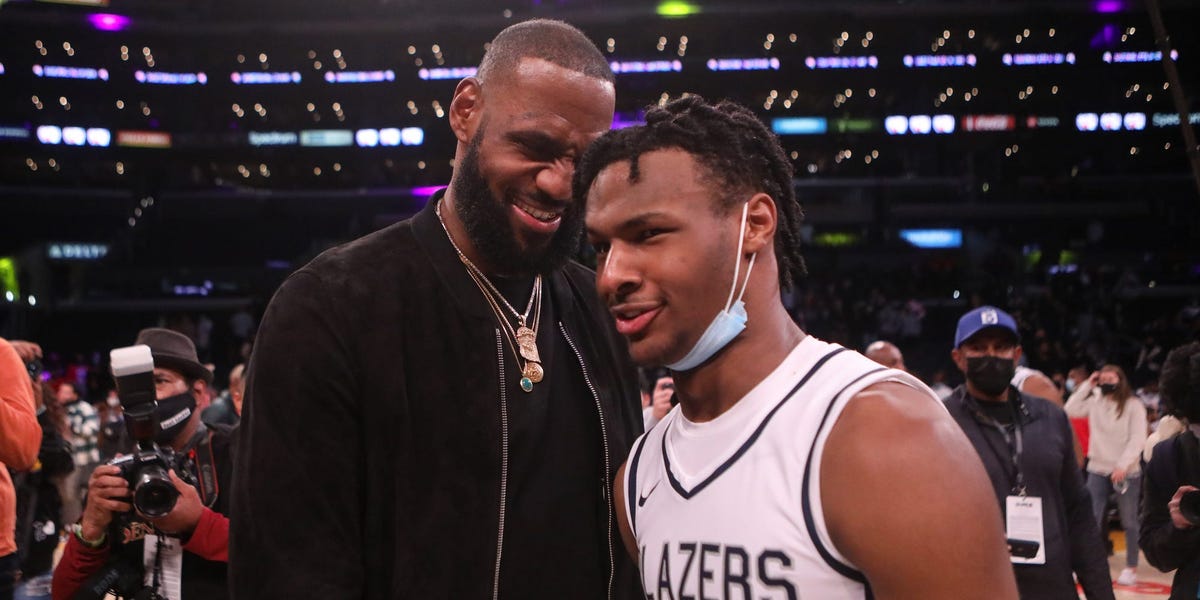 In recent years, LeBron James has been fairly open about his desire to play in the NBA with his son, LeBron James Jr., who goes by Bronny.

However, for a while, the James’ family was not aware of that plan.

Bronny and James’ wife, Savannah, told Sports Illustrated’s Chris Ballard that they weren’t aware of James’ plan until he stated it publicly.

“No, we hadn’t talked about it,” Savannah told Ballard. “I mean, yes, because obviously you ask the boys what they want to be when they’re 10, 11 years old. I want to be in the NBA. And I think that’s just something that was near and dear to LeBron’s heart.”

Bronny also told Ballard that he wasn’t aware of the plan, but called it “pretty cool.”

And James confirmed to Ballard that he hadn’t discussed it with his family.

“We don’t even really talk about the future too much,” James said. “I put it in the air because I like to talk to the basketball gods out there and see if things can come to fruition. I’ve always set out goals in my career, talked to the basketball gods, and they’ve listened to all of them. Hopefully they can listen to this last one, too.”

What started out as speculation has become more definitive in recent years.

In 2017, James told GQ he didn’t know how much longer he wanted to play, but said he’d “love” to play against Bronny — who was then in eighth grade.

“I damn sure would love to stick around if my oldest son can have an opportunity to play against me. That’d be, that’d be the icing on the cake right there.”

Fast forward to February 2022, when James put it in more definitive terms to The Athletic’s Jason Lloyd.

“My last year will be played with my son,” James told Lloyd. “Wherever Bronny is at, that’s where I’ll be. I would do whatever it takes to play with my son for one year. It’s not about the money at that point.”

Speaking to Ballard, James even hinted at staying in the NBA long enough to play with Bryce, his 15-year-old son and Bronny’s younger brother.

“I feel like I could play for quite a while. So it’s all up to my body, but more importantly, my mind. If my mind can stay sharp and fresh and motivated, then the sky’s not even a limit for me. I can go beyond that. But we shall see.”

The path to making this happen is still a bit unclear. James recently signed a two-year, $97 million extension with the Lakers, but the second year has a player option. So, James will have the opportunity to hit free agency in 2024. If not, he can become a free agent in 2025.

Bronny is a four-star recruit and has generally been ranked in the top 50 high school prospects, according to Ballard. The James family suggested to Ballard that Bronny may want to play college basketball. But then there is the matter of whether he’ll be good enough to be drafted by a team. As Ballard wrote: Would a team draft Bronny for a shot at landing LeBron?

Perhaps most importantly, both James Sr. and Savannah say they haven’t pressured their boys to play basketball, saying the decision has been entirely in their kids’ hands. Their daughter, 7-year-old Zhuri, has shown no interest in basketball, the parents said.

“I’ve always let them just see if they had a love for [basketball],” James told Ballard. “Because, at the end of the day, nothing is going to come to fruition if you’re just doing it because you feel like it’s what your parents are doing. Nah, it’s going to fizzle out too fast.”