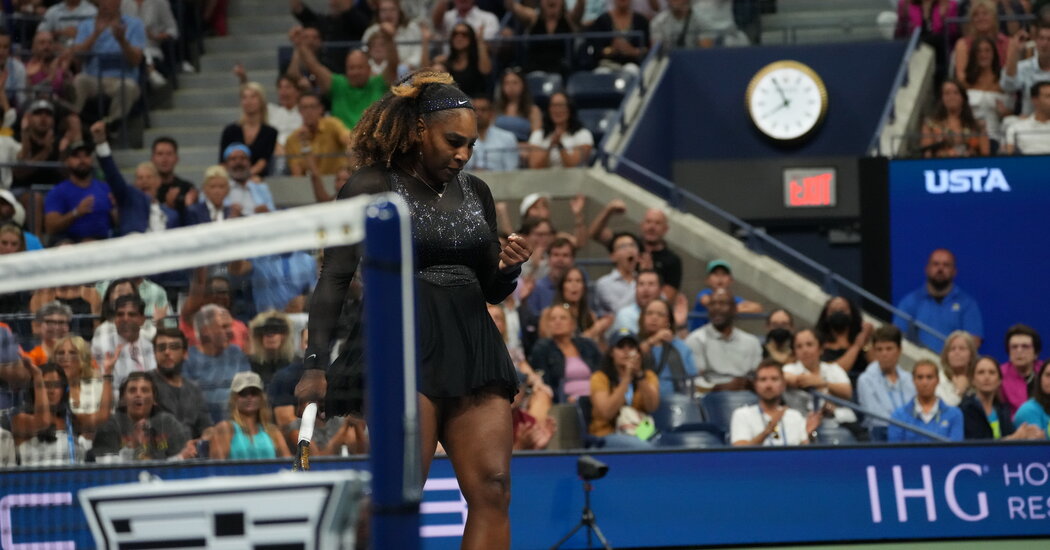 Serena Williams is almost 41. She did not play competitive tennis for nearly a year, and it showed — truly it showed — at Wimbledon, in Toronto and in Mason, Ohio, at the three tournaments where she made painfully brief appearances earlier this summer before arriving in New York for her farewell U.S. Open.

She looked slow to react and slow on the run. She looked rusty, mistiming returns off second serves that she would once have punished.

But that is all irrelevant now. Williams is relaunched, as she made clear by defeating Anett Kontaveit, the No. 2 player in the world, on Wednesday night.

Williams is into the third round of what is very likely her final tournament: convincingly replaying her greatest hits — big-point aces, swing-volley winners, full-cut groundstrokes on the move — and quickly giving first-time opponents like Danka Kovinic and Kontaveit a true taste of what it is like to face the real Serena.

With her 7-6 (4), 2-6, 6-2 victory over Kontaveit complete, Williams was asked on court by ESPN analyst Mary Joe Fernandez, “Are you surprising yourself with your level at the moment?”

Williams looked at her for a little while and chuckled.

It was the most telling answer of the evening, and no actual words were required even if Williams did tack on a few when the chuckling was done: “I’m just Serena you know,” she said.

“She’s not coming here to be surprised by winning, otherwise she wouldn’t be here,” said her coach Eric Hechtman.

This is not bravado. This is hard-earned confidence. The kind that comes with being raised by parents who made it clear that greatness lay ahead if the right choices and sacrifices were made. The kind that comes from measuring yourself against an uber-talented big sister named Venus from the moment you could pick up a racket on a court full of cracks in Compton, Calif. The kind that comes from winning 23 Grand Slam singles titles across nearly two decades against rivals from multiple tennis generations and despite all manner of setbacks, both professional and personal.

Williams has good reason to believe that she can rise above, even in the twilight, because she has done it so often.

The U.S. Open could be the tennis star’s last professional tournament after a long career of breaking boundaries and obliterating expectations.

“I would never, ever count Serena Williams out, and if you do, that would be your biggest mistake,” said Kathy Rinaldi, the captain of the United States King Cup team, who was watching on Wednesday.

If you do count her out, as Williams has explained before, you are only going to help her.

“Because she’s going to use that to prove you wrong,” Rinaldi said. “But she’s really enjoying this one. You can clearly see. It’s got to be really tough for her opponents: to face her and face the crowd.”

It has been quite a team effort so far: Williams rolling back the years and five tiers of stands packed to the roof in sold-out Arthur Ashe Stadium with fans wholly committed, perhaps for the first time, to showing Williams nothing but love in a venue where she has generated ambivalence in the past with her outbursts and, at other times, with her dominance as she racked up six U.S. Open singles titles and made long runs at No. 1.

But with Williams preparing, in her words, to “evolve away from tennis,” the U.S. Open crowd seems to have considered her body of work, enduring excellence and manifest love of the game and the battle and decided to go all in.

“There’s no rush here,” Williams said with a grin, alluding to her impending evolution. “I’m loving this crowd. Oh, my goodness, it’s really fantastic. There’s still a little left in me. We’ll see.”

Watching her lose 6-4, 6-0 last month to Emma Raducanu in the first round of the Western and Southern Open with tape on her left leg, it did seem reasonable to believe she might not be able to pull her game together in time.

“She was a little banged up in Cincy,” Hechtman said. “She’s much better now and of course the crowd helps a lot, absolutely. At the end of the day, you play that many years and that many tournaments and win that many titles, you need the big stage to get you up for it.”

There have been more standing ovations than at a national political convention, myriad shouts of support and, less sportingly but probably unavoidably, plenty of cheers for the opposition’s errors, including their missed serves.

The latest sellout crowd on Wednesday night even booed a machine: disagreeing with the electronic line-calling system when one of Kontaveit’s winners was shown to have landed on the extreme outside edge of the sideline.

In the second set, Kontaveit won one of the points of the tournament — a spectacular scrambling effort punctuated with a backhand winner — and was greeted with a golf clap.

It will not get easier for her rivals. Ajla Tomljanovic, the tall and unseeded Australian who will face Williams in the third round on Friday night, was playing on Court 7 on Wednesday as Williams and Kontaveit dueled in the main stadium.

“I was hearing the crowd and it like scared me, even though I was playing on a different court,” Tomljanovic said. “So I’m going to have to get my earplugs.”

Tomljanovic said before even seeing the draw she had a vision that she would face Williams in New York and was only hoping that it was not going to be in the first round.

So it has turned out, and Tomljanovic, like nearly all of Williams’s opponents in this latest comeback, has never played her before. Like Kontaveit, she wants the experience to make her career feel complete but is not sure how she will handle the moment (Kontaveit ended up in tears at her news conference).

“I do this trick where I feel like the crowd is cheering for me as well,” she said. “I heard Novak Djokovic say that once about doing that in his matches. It’s a good one. It’s all about tricking your mind really, because you can’t control what the crowd does.”

The British chair umpire, Alison Hughes, tried her best on Wednesday night and ended up saying “please” a great deal more than she succeeded in truly quieting the din.

It is a moment that spurs thoughts of U.S. Opens past, particularly of Jimmy Connors’ rip-roaring run to the semifinals in 1991 as he was celebrating upset victories and his 39th birthday.

“I just feel like I have had a big red X on my back since I won the U.S. Open in ’99,” Williams said. “It’s been there my entire career, because I won my first Grand Slam early in my career. But here it’s different. I feel like I’ve already won, figuratively, mentally.”

A record-tying 24th Grand Slam singles title still seems an unreasonable notion to many of us outsiders. She is 40, after all, and also playing doubles with Venus starting Thursday night, which could put extra strain on her injury-prone frame.

Her ex-coach Patrick Mouratoglou counseled against doubles during majors and was proved correct in 2018 when in her first major after coming back from childbirth she played both events in the French Open and had to exit the singles draw with an injury.

She and Venus have not played doubles at a major again until now, but it is understandable that they want this full-circle moment, and Hechtman said the plan is simply to eliminate a full practice session on the days Serena plays doubles.

But her singles draw certainly gets one thinking about the possibility of a deeper run. There are no Grand Slam singles champions left in Serena’s quarter of the draw and only one left in her half: the unseeded Canadian Bianca Andreescu, who beat Williams in the 2019 U.S. Open final.

But going all the way surely does not seem preposterous to Team Serena, and when Hechtman was asked very late on Wednesday night about the Connors precedent, he mulled it over and said he was leaning toward a different U.S. Open swan song: Pete Sampras, who won the 2002 men’s title in what turned out to be his final tournament.

Dream on New York, and as the Williams family would surely endorse, dream big.