I’m an American who was accidentally in London for the Queen’s funeral. Here’s what it was like. 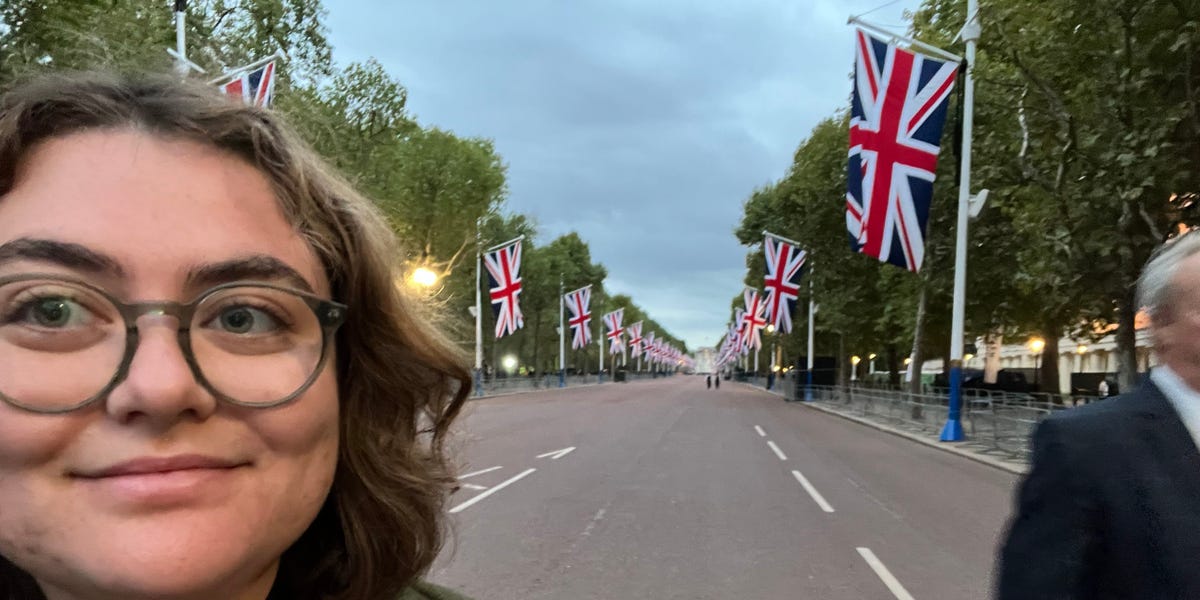 Months ago, I booked a trip to London to move my sister into her study abroad program. That turned into witnessing history once it was announced that the Queen’s funeral would happen the day after we arrived.

Most of the time, I’m a reporter for Insider’s economy team in New York City. On this trip, I was excited to be a tourist in London, and help move my younger sister in for her study abroad program.

I had planned on going to my favorite bookstore, perhaps checking out some museums, and hopefully catching a show on the West End.

Instead, I — along with the world — learned some history-making news on September 8, just about a week before my trip: Queen Elizabeth II had died. It instantly became clear my short trip was going to be a lot different than I expected.

So, on Monday, my sister and I set out to join the masses witnessing the Queen’s funeral.

At around 9 a.m., we headed towards the Tube to set off to Charing Cross.

Our initial goal was to get to The Mall and secure a spot to view the procession after the funeral. But by the time we got off the Tube, ambassadors for Transport for London warned it was already full — in fact, one told us that the best view we would get of the proceedings would probably be watching it from my hotel room. That made sense; as Insider’s Maria Noyen and Hannah Williams reported, thousands of people were filling up The Mall and other viewing areas.

But we were undeterred. We were Americans here to spectate, and we would go wherever we needed to at least be a part of the action. So, we joined a very British queue that snaked around the city.

We walked for nearly two hours. At one point, we made it to the side of Westminster Abbey — but we were told there was nothing to see there.

All of the action at Westminster Abbey was happening out front, so we ultimately decided to keep heading towards Hyde Park in hopes of watching the funeral on the big screen. We did see a few official-looking cars pull up. Ironically, President Joe Biden was actually staying close to where we were in London — which meant bad traffic when we arrived. We passed the abbey right around when he and other world leaders were filing in.

As we got close to Hyde Park, we were directed onto side streets. Later, we realized that the area we were diverted away from was Wellington Arch — where the funeral procession ended.

Quarters were tight in the queue at this point, and we were feeling the heat. By now, we were worried that we might not even make it into Hyde Park in time to watch the proceedings.

Finally, after walking three miles all the way around London, we made it to the grounds of Hyde Park. There were huge screens set up in several different corners of the park, and thousands of onlookers rushing in to grab a spot.

As we walked in, we noticed there was a whole area of portable toilets, urinals, water, and food set up for funeral viewers.

Everyone rose when the congregants at the funeral rose, and the crowd was fairly rapt (and quiet) the whole ceremony.

Once the funeral kicked off, everyone was very attentive. We rose and sat when the congregants at Westminster Abbey did. Most onlookers were fairly quiet, although I did hear a few palpable groans when UK Prime Minister Liz Truss spoke.

Many of the gathered onlookers joined in for the recital of the Lord’s Prayer, with some bowing their heads and closing their eyes.

Hyde Park had an almost festival-like atmosphere. We joined the masses in getting food from some of the assembled stalls as a ceremonial cannon fired.

You could tell how much planning went into the day from how easy it was to get food, use the bathroom, and grab some water. My sister and I enjoyed some fish and chips, fully embracing sitting in the dirt. The screens showed the procession of the Queen’s casket around the city.

At Hyde Park, there was a cannon that went off every minute of the procession; it was in conjunction with the tolling of Big Ben. There was definitely an interesting contrast between the crowds grabbing a bite to eat as a cannon boomed in the background.

Still, there were reminders of the significance the day held for some all around. We saw makeshift memorials on some trees.

The crowd seemed to lean into the bittersweetness of the day. We saw young kids on parents’ shoulders, there to witness history. One man said he had flown in alone from Sweden to mark the occasion. While I’m far from a diehard royalist, I was obviously there too. There aren’t many times you get to feel like you’re a part of history, but I think we all felt it on Monday.

We finally escaped Hyde Park, and saw that businesses and the city seemed to come back to life.

On our way to the funeral, almost every single store and restaurant we walked past was closed. Many displayed signs expressing their grief over the Queen’s death, and others had their own pictures of the Queen on display.

As we made our way back, though, we saw restaurants and pubs filling up. The streets were full of Londoners and visitors alike, ready to walk and eat or head home after the Queen’s departure to Windsor.

Later that night, long after the Queen had left London, I walked back to Buckingham Palace.

Compared to earlier that day, Buckingham Palace was quiet and empty. There were a handful of tourists taking photos, and standing where the casket had gone mere hours earlier. There was still plenty of fencing and security milling around, with police cars intermittently going down the drive.

Even so, the whole area felt a little bit sad, like the calm after the storm. I happened to be here by chance, and I’m not someone who’s a huge supporter of the monarchy, but I still felt swept up by the day’s proceedings. In talking with Brits and other onlookers, we all speculated on what, if anything, could be comparable to this. I can’t imagine an event of this scale and spectacle happening in the United States. In all honesty, I’m not sure if that’s a bad thing. But getting to be in London and witness a once-in-a-lifetime event is still something I’ll always be grateful for.

Share
Facebook
Twitter
Pinterest
WhatsApp
Previous articleThe Midnight Club Trailer: Death is a Rite of Passage in Netflix Series
Next articleYes, your dog can get diabetes — here are the signs, plus 5 tips to prevent this serious condition