I tried 12 of Aldi’s fall foods, and I’d buy nearly all of them again 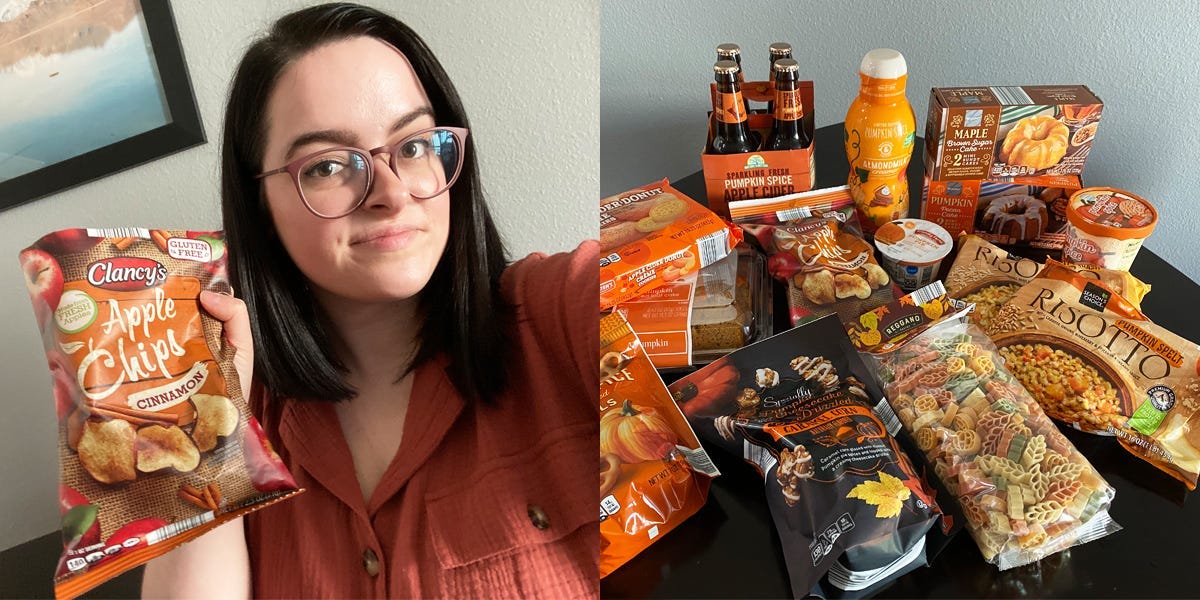 I tried 12 of Aldi’s fall products that were already on shelves.

Aldi stocks up on fun new items every month, and when it comes to fall, the chain brings its A game with plenty of pumpkin, apple, maple, and squash products.

The store’s fall finds started hitting shelves on September 9, so I taste-tested every item I could get my hands on.

The Season’s Choice frozen pumpkin risotto is made with spelt and veggie broth.

I love risotto, but it takes a while to make at home and can be difficult to find at a restaurant without a meat-based broth, which I don’t eat as a vegetarian.

But Aldi’s pumpkin risotto swaps the usual rice for spelt (an ancient grain and subspecies of wheat) and uses vegetable broth.

It’s also a freezer item, so I could stock up and enjoy a quick risotto whenever I want.

It tasted a bit bland, but a little salt and cheese fixed it.

The package says to cook the pumpkin risotto for seven minutes, but mine took about twice as long. Still, this was faster than making it from scratch.

It smelled good, and when I took a bite, I noticed the spelt had a soft, slightly chewy texture.

The spelt and pumpkin cubes were cooked well, but the small carrot pieces were a little too crunchy.

The risotto was actually a little bland on its own, so I added a bit of salt and grated cheese, which made it perfect.

The butternut-squash risotto was similar to the pumpkin one but made with rice.

This alternate Season’s Choice butternut-squash risotto is also made with veggie broth, cheese, and carrots.

I was excited to try another vegetarian risotto.

I actually preferred the spelt to the rice.

This risotto also cooked for 14 minutes, double the time listed on the package.

The taste was basically the same, and the carrots were still too hard.

The rice was slightly chewier than the spelt, and ultimately, I preferred the texture of the latter.

I’m not the biggest fan of popcorn, but the caramel corn looked pretty good, with a rich caramel coating and sweet drizzle flavored like pumpkin cheesecake.

It didn’t really taste like pumpkin but was still delicious.

The popcorn in the bag looked just like the picture on the front — an impressive feat for a packaged snack.

The texture was light and chewy inside, and the exterior had a nice crunch from the caramel coating.

I didn’t quite taste the pumpkin from the drizzle, but the caramel corn was still good. I enjoyed several servings while watching some of my favorite fall films, which is noteworthy since I never eat popcorn.

I was intrigued by Friendly Farms’ pumpkin-pie Greek yogurt.

I eat a good amount of yogurt and love it with a variety of toppings, so I figured a Greek yogurt flavored like pumpkin pie would be good with some seasonal fruit and granola.

This was super tangy, with a very slight pumpkin flavor. It wasn’t quite sweet and tasted more like plain Greek yogurt than anything else.

On its own, I didn’t like it much. It needed something to tone down the tanginess, like some honey or maple syrup and maybe a sprinkle of granola.

I probably won’t buy it again since the pumpkin flavor was so faint. It’d be easier to get my usual yogurt and dress it up with seasonal toppings.

The bag of Clancy’s apple chips felt nearly empty when I purchased it.

I prefer my apples fresh, so I wasn’t too excited about trying them in chip form.

They come in a small plastic bag and are dusted with cinnamon.

When I opened the packaging, I was pretty disappointed with how few were in there. I know packaged snacks usually need to leave space for nitrogen gas to keep them fresh, but this bag was only about a third — if not a fourth — of the way full.

I still ended up really liking the apple chips.

Aside from the initial disappointment, I was impressed with the chips.

They were simple with a lightly sweet, apple flavor that was balanced by the cinnamon. The texture was crunchy at first, then a little chewy and sticky.

I loved these on their own but also want to try them with dessert hummus or caramel dip.

The pretzels are covered in a light-orange, pumpkin-flavored yogurt.

I was looking forward to this “naturally flavored” take from Aldi.

The pretzels found the ideal balance of sweet and salty.

The pretzels hit a good balance of sweet and salty, with a mild pumpkin-spice flavor.

I also appreciated the ratio of yogurt coating to pretzel — I could still slightly see the base through the orange lining.

I was very tempted by Aldi’s creme cookies, which reminded me of Oreos.

But when I opened the package, I noticed they smelled overly sweet and a bit artificial.

These were my least favorite of the Aldi fall foods I tried.

The cookies were overpoweringly sweet, with a strong artificial flavor and strange aftertaste.

I was pretty disappointed since I love everything this treat represents: apple cider, donuts, and cookies.

This is one fall item I definitely don’t see myself buying again.

The packaging of Belmont’s pumpkin Bundt cake was a little deceptive.

The photo on the package shows the cakes covered in a delicious-looking glaze, but a note in the corner says the topping isn’t included. I found the advertising a little misleading.

It was still a delicious and easy dessert.

The pumpkin Bundt cake was soft and spongy, with little pecan chunks throughout.

I didn’t mind the flavor of the nuts, but they were chewy rather than crunchy. I’d prefer this dessert without them.

Like the other packaging, there’s also a photo of the maple Bundt cake covered in white frosting that’s not included in the box.

The maple Bundt cakes were also much lighter in color than the pumpkin ones.

The maple-flavored cake was my favorite fall food from Aldi.

I can’t wait to buy more of this fall dessert.

The maple Bundt cake was super moist and soft, more so than the pumpkin variety.

I enjoyed one plain, which was great, and ate the other alongside Sundae Shoppe’s pumpkin-spice ice cream, which was an incredible combo.

It didn’t look flashy, rather just like a simple pint of pumpkin-flavored ice cream. I figured it would be good but nothing to write home about.

The pumpkin-spice ice cream had an amazing texture.

The pumpkin flavor of this ice cream was impressive, with a good balance of spices and sweetness.

But I was most in awe of the texture. The first scoop was super soft and creamy. But even as I ate it throughout the week, the ice cream stayed pretty soft and scoopable. Most pints get rock-solid after they’ve been opened and stored.

I typically prefer my ice cream with chunky add-ins, like cookie dough or brownie bites, but this simple dessert was amazing on its own.

Aldi’s fall-shaped pasta comes with noodles that look like pumpkins, leaves, and other seasonal shapes.

I thought they were so cute, and I liked that the noodles were dyed with natural food-based coloring.

The seasonal noodles tasted and felt like regular pasta.

These noodles mostly cooked like regular pasta. The green ones, especially the leaves, held up the best, followed by the pumpkin-shaped pieces.

It tasted like standard pasta, and I plan on trying it again with Aldi’s fall sauces once those hit the shelves.

Share
Facebook
Twitter
Pinterest
WhatsApp
Previous articlePlease stop trauma dumping on me just because I had cancer. It only reminds me of my own horrific experiences.
Next articleKanye West apologized for ‘any stress’ that he caused Kim Kardashian in his ‘frustration’ with co-parenting their 4 kids