I quit the Army to become a mom. My 6-year-old was recently diagnosed with cancer, and now I’m quitting my new job to be the best mom for him. 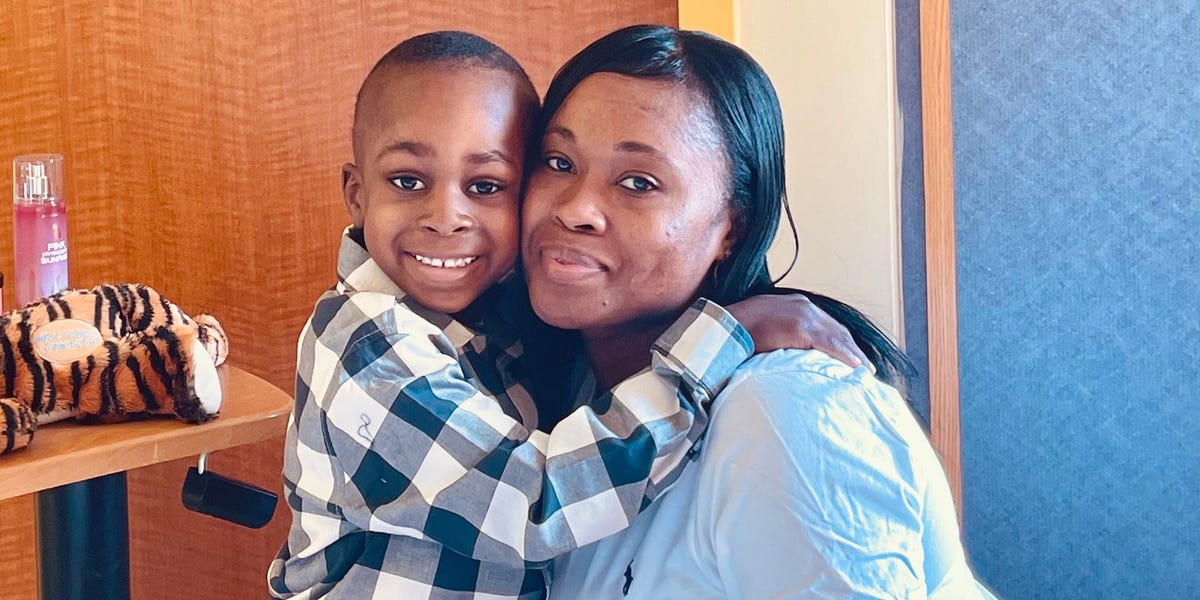 This as-told-to essay is based on a conversation with Mahogany Howard. It has been edited for length and clarity.

Last April, I was in the emergency room at Yale New Haven Children’s Hospital. I had been there a lot that year with my then-5-year-old, Bryson, who had been experiencing strange symptoms for about six months.

On previous visits, I felt like staff brushed off my concerns. Now, suddenly I felt like I was in a five-star hotel: Nurses brought Bryson a stuffed animal, they made sure I had a phone charger, and they ushered me to get food. That was the first sign my life was about to change.

After I had a full belly, the medical team asked me to step into another room. I said no. Whatever conversation we were going to have could happen in front of my son. But they insisted. In that room, I heard numbers, blood counts, and medical jargon. I told them I needed information in layman’s terms. That’s when one word cut through everything: cancer.

I mentally blacked out. I insisted Bryson was healthy enough to come home. But back in his room, doctors were already preparing him for surgery. Within, days my baby had two surgeries, tubes and IVs in both arms, and a cast to keep him from pulling out his ports.

Four months before I conceived Bryson, I lost my first pregnancy. I thought of that baby when Bryson was admitted. I had mourned that child so hard — a child I’d never been able to touch or hold. How hard would I mourn my son after five years of being everything to each other?

When I got pregnant with Bryson, I was in the Army. Once he was born, that was the end of my career. I didn’t want to be a soldier; I wanted to be a mom. I moved home to Connecticut to be near family and I started working nights for the Postal Service. I provide for him when his eyes are closed so that when his eyes are open, mommy is there.

As a single mom, everything falls on me. My sister-in-law watches Bryson while I work, but all the financial responsibility is mine. Bryson is an old-school child: He loves the outdoors, mud and dirt. Last year for his birthday I got us a house with a yard where he can play safely to his heart’s content. When he got sick, I was determined to not let that home slip away.

Applying for financial support is time-consuming and ineffective

I have exhausted myself filing for government support, grants, and relief. I fill out the applications while Bryson sleeps with his head on my chest. When he moves, my shirt is covered in his hair, which falls out again with each round of chemo.

I was approved for $30 of social security to cover expenses while Bryson was hospitalized. That was after an interview that took more than two hours: two hours of caring for my sick child that I’ll never get back.

The hospital told me to start a GoFundMe campaign. It was outside my comfort zone, but I did it for Bryson. I don’t have social media, so I had trouble crowdsourcing, but I got a big boost when my employer sent the campaign to everyone in our building.

It’s awful to worry about finances when I should only worry about my son. But through all of this, Bryson is my strength. When I break down, he tells me he’ll take care of me. It’s a weight he shouldn’t have to carry, but his inner spirit is amazing.

The Truth About The Yellow Daisies Scene In Gilmore Girls