Hawaiian Airlines has been named the world’s best domestic airline. Here’s what it’s like to fly on it. 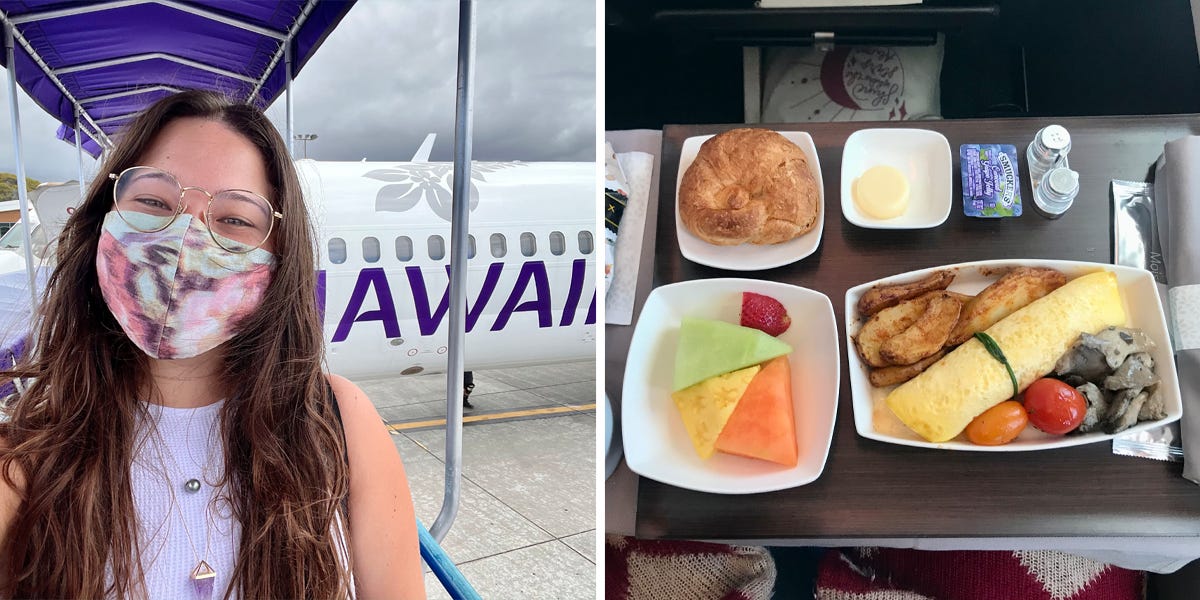 Hawaiian Airlines was named the world’s best domestic airline for 2022 — and I get why after flying with them for years.

As someone who was born and raised in Hawaii, Hawaiian Airlines has been my go-to airline for as long as I can remember.

Throughout those years, Hawaiian Airlines has received myriad accolades, such as being named the most punctual airline by the US Department of Transportation every year since 2004.

Most recently, Travel + Leisure awarded it the title of World’s Best Domestic Airline for 2022.

In Hawaii, this airline is known for playing an essential role in the modern history and development of the islands. It’s the largest and longest-serving airline in the state, with its centennial celebration approaching in 2029.

Between trips for business, pleasure, and visiting home during breaks while I was in college, I’ve spent countless hours traveling with Hawaiian Airlines. Here’s what it’s like to fly on it.

First off, your destination determines the type of aircraft you fly in.

Hawaiian Airlines flies to all of the major Hawaiian islands, 16 cities in North America, and offers non-stop service to 10 international destinations in Asia and the South Pacific.

Those looking to island hop will board a Boeing 717 that’s specifically designed for short-range trips. It usually has about 30 or so rows of five seats.

The amenities are basic, but the flight is so short that it’s hardly a hindrance.

Because the flight is so short, I wouldn’t splurge on a first-class ticket for an inter-island flight — though the seats do look significantly more inviting.

Flights to and from the US mainland are more likely to be assigned an A321neo.

These are larger vessels, which seat 189, are intended for transpacific travel.

The interior feels more spacious and its seats, which have a three-to-three configuration in the main cabin, are much comfier than on the Boeing 717.

During these flights, in my experience, passengers have been encouraged to lower their window shades to create a peaceful ambiance for those who wish to rest.

Some flights might get the A330, the largest in Hawaiian Airlines’ fleet.

This type of plane seats 278 and has a two-four-two seat configuration.

It’s typically used for flights to major cities, such as Los Angeles and New York, or for longer journeys to the likes of Japan, New Zealand, and Australia.

These international destinations are the only ones I’ve yet to travel to, but they are at the top of my bucket list.

The airline’s app is easy to use and has in-flight entertainment.

Though I’ve had to download apps for other carriers in the past, I’ve never actually kept any on my phone except the one for Hawaiian Airlines.

This is mainly because I fly on it more frequently than any other airline, but it’s also proven to be quite useful.

I’ve used the app to book trips, view details about upcoming reservations, check in for flights, and access in-flight entertainment like movies, TV shows, and games.

Throughout the years, I’ve experienced every method of consuming media on an airplane, from tablets to built-in monitors on the seats. Using my phone for this purpose isn’t always ideal because it drains my battery and I can’t watch a movie while charging my device.

But it’s also the most private and sanitary method, which helps make up for the minor inconvenience.

When people think about airplane food, “gourmet” is not a common word association.

First-class passengers are served a three-course meal for breakfast, lunch, or dinner depending on the flight time.

But even those seated in the main cabin are given the likes of a sandwich or bagel roll as well as a sweet treat, such as the iconic pineapple-shaped shortbread cookies from Honolulu Cookie Co. or chocolate-covered macadamia nuts.

The food’s not bad, either.

Hawaiian Airlines’ food may not be Michelin star-worthy, but the dishes are flavorful and don’t cost extra.

There isn’t enough time for meal service on inter-island flights (some are just 40 minutes), but travelers still receive a complimentary passion-orange-guava juice.

These are passed out shortly after take-off and by the time flight attendants collect all the trash, the plane is already starting to descend.

Plus, a free snack is a free snack. Many airlines don’t give any snacks at all on short flights.

The carrier’s beverage game is pretty strong, and I appreciate its use of local brands.

Many of the beverages on board are locally sourced, including an exclusive coffee blend by Honolulu-based Lion Coffee as well as beer and hard seltzer from Maui Brewing Co., Hawaii’s largest craft brewery.

The airline even has an official sommelier, Chuck Furuya, who was also the first master sommelier in the state.

I also like that the airline has implemented some eco-conscious initiatives.

Those who care about environmental issues likely know that transportation is one of the most polluting industries in the US. Experts have estimated that aviation is responsible for about 2.5% of global carbon-dioxide emissions.

As a frequent flier who is passionate about sustainability, I appreciate knowing that the carrier I most regularly choose to fly with is implementing some eco-conscious initiatives to mitigate its impact.

For example, Hawaiian Airlines partners with Conservation International to offer guests the option to purchase carbon offsets — though there’s debate about how effective these actually are.

Other action steps include curating a fuel-efficient fleet as well as taking measures like strategic flying to reduce fuel burn and carbon emissions. The airline has also committed to replace single-use plastics from in-flight cabin services by 2029.

Out of all the times I’ve flown with Hawaiian Airlines, the experience I’ll never forget is how well the flight attendants treated me after I got airsick on a flight from Los Angeles to Oahu.

A series of unfortunate events led to them cleaning my vomit off the floor while I wallowed in embarrassment at the back of the plane. That self-pity didn’t last long because the flight attendants were incredibly kind, made sure I knew it was a non-judgemental environment, and gave me ginger ale to calm my stomach.

That experience stuck with me for the best of reasons: I genuinely felt like they cared about me and my well-being. (And I hope whoever was on clean-up duty that night was given a raise.)

Even on less eventful flights, I always feel an immense sense of kindness from the crew. After many years and dozens of flights, I’ve never had a bad customer-service experience while flying with them.

Last but not least, the views on its flights are absolutely breathtaking.

When you’re arriving or departing from one of the most beautiful tropical locales, the journey is inherently going to include some spectacular views. And let me tell you: They never get old.

To this day, I always opt for a window seat whenever possible because I love taking aerial pictures of the islands, clouds, sunrises or sunsets, and even the sea of lights you encounter when flying into cities at night.

No matter where my final destination was, any time I’ve flown with Hawaiian Airlines I was guaranteed a sigh to behold — and that alone may just be worth the cost of a ticket.

What Zac Efron Has To Say About Those MCU Casting Rumors