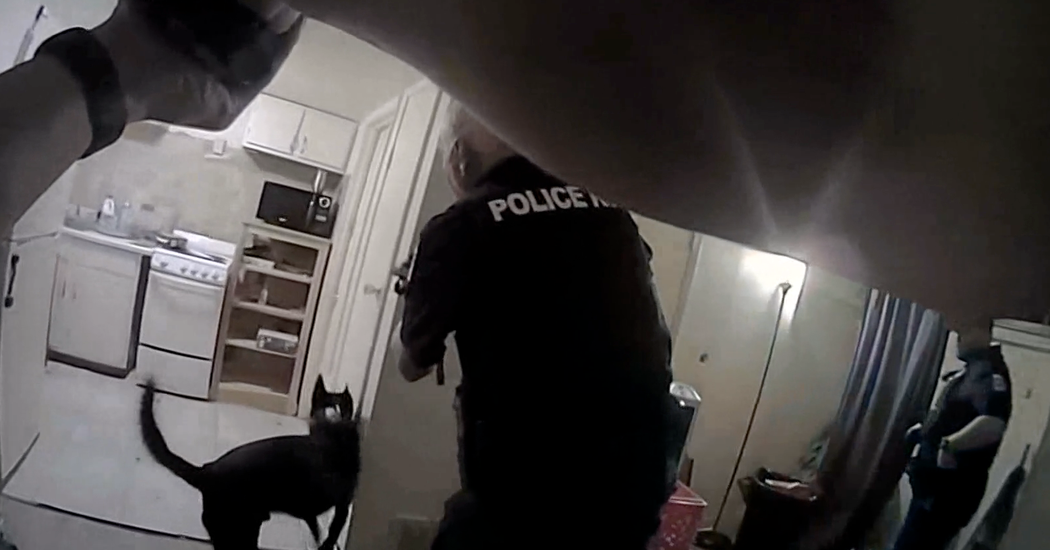 A police officer fatally shot an unarmed Black man in an apartment in Columbus, Ohio, early Tuesday morning, moments after encountering him during an attempt to serve a felony warrant, body camera footage released hours after the shooting shows.

The city’s police chief, Elaine Bryant, said at a news conference on Tuesday that Officer Ricky Anderson, a 30-year department veteran, fired his gun after the man raised his hand, in which he appeared to be grasping something, WCMH-TV reported. Chief Bryant said a vape pen cartridge was found on the bed where the man, Donovan Lewis, 20, was shot.

Officer Anderson was placed on paid administrative leave as were two other officers and a sergeant who were present for the search, said Andrés Antequera, a spokesman for the Columbus Division of Police. Mr. Antequera said that the duration of the officers’ leave “can and will vary based on their involvement.”

The body-camera footage, which was released Tuesday and published by The Columbus Dispatch, shows officers arriving at an apartment on Sullivant Avenue, in the city’s Hilltop neighborhood, just before 2:30 a.m. They knock repeatedly on the apartment’s front door and yell for its inhabitants to come out. Several minutes later, a man emerges and tells the officers that others inside are asleep. Police officers detain him and another man, placing them in handcuffs.

Moments later, officers enter the apartment and unleash a dog to locate Mr. Lewis. Officer Anderson opens the bedroom door and, seconds later, fires at Mr. Lewis as he was sitting up on a mattress. As Mr. Lewis writhes on the bed, officers yell at him to show his hands and order him to “crawl out.” One officer tells him to “stop resisting” as he is placed in handcuffs. About two minutes after Mr. Lewis is shot, an officer remarks that they should “get him out to the medic,” and they carry him out of the apartment.

They place him on the grass outside the apartment building. Emergency medical workers are seen arriving about seven minutes after Mr. Lewis was shot.

Mr. Lewis was taken to Grant Medical Center in critical condition and was pronounced dead there at 3:19 a.m., less than an hour after officers entered the apartment, WCMH reported.

At the time of the shooting, the officers were attempting to serve “active warrants” against Mr. Lewis for “improper handling of a firearm, domestic violence, and assault,” said Mr. Antequera, the Columbus police spokesman.

Mayor Andrew J. Ginther of Columbus said in a statement that “transparency, accountability and cooperation” were the city’s “bedrock values” that would “inform every step forward as we uncover the facts.”

“Tuesday’s fatal police shooting resulted in a tragic loss of life, and regardless of the circumstances, a mother has lost her son in the city of Columbus,” he said.

Fatal police shootings of Black people in Columbus, Ohio’s capital, have touched off furious protests in recent years. In December 2020, a white Columbus police officer who was responding to a call about a suspicious vehicle fatally shot Andre Hill, a 47-year-old Black man, in a garage. City officials agreed to pay Mr. Hill’s family a $10 million settlement, the largest the city had ever paid out.

Several weeks before Mr. Hill was shot, Casey Goodson Jr. was shot six times in the back by a Franklin County sheriff’s deputy as he was returning home from a dental appointment. The deputy, who left the department last year, was charged with murder.

In April 2021, a white police officer fatally shot Ma’Khia Bryant, a 16-year-old Black girl who was threatening another young woman with a steak knife during a dispute outside Ms. Bryant’s foster home. A grand jury declined to indict the officer who shot her.

Last September, the Justice Department agreed to review the Columbus Division of Police and its practices, including officer training and recruitment, the city said in a statement.

This partnership is ongoing, said Glenn McEntyre, an assistant director of the city’s Department of Public Safety. The Justice Department did not immediately respond to a request for comment on Wednesday.