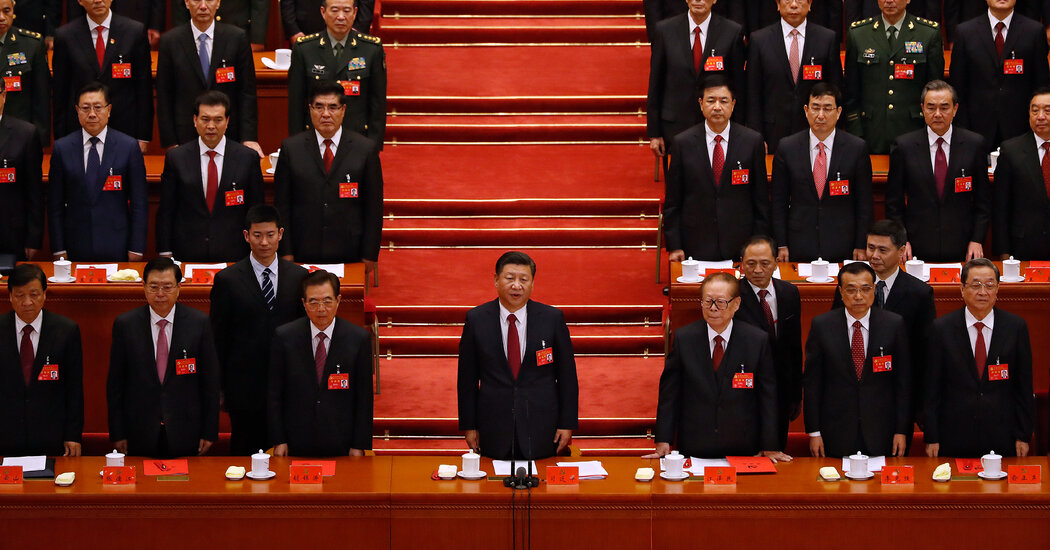 A Communist Party congress that is poised to anoint Xi Jinping as China’s top leader for another five years will open in Beijing on Oct. 16, officials announced on Tuesday.

The starting date of the party’s 20th congress — a pivotal event in China’s political life cycle — was revealed after the Politburo, a council of 25 senior officials, settled on plans for the event. Such congresses are choreographed rituals held every five years, bringing together about 2,300 delegates who rarely, if ever, dissent. This one will reveal China’s broad policy direction and its next leadership lineup at a time of slowing growth at home and deepening strains abroad, especially with the United States.

The brief official summary from the Politburo meeting gave few details about the congress, and did not say how long it would convene, though about a week is usual. The congress, the summary said, would gather at a “crucial moment” in Mr. Xi’s plans to turn China into an prosperous, advanced global power under one-party rule, and would “formulate a program of action” for that goal.

While there is no official certainty that the meeting will extend Mr. Xi’s era in office, his accumulation of powers and the party’s intense promotion of his record suggest that he is highly likely to win a third five-year term as party general secretary, prolonging a tenure that began in 2012. Previously, top Chinese leaders appeared to have been settling into a pattern of 10 years in power. But party officials have depicted Mr. Xi as the visionary leader that China needs to secure its rise, in an increasingly perilous world, well into the future.

“Western countries led by the United States don’t want to see the emergence of a powerful China,” Qu Qingshan, a senior ideology official for the party, wrote in an essay about Mr. Xi’s role in China’s future in July. “The struggle between the two social systems and two ideologies will be long-lasting, complicated, arduous and severe.”

There is no formal limit to how long a party general secretary can stay in office. In 2018, Mr. Xi engineered the abolition of a term limit on the state presidency — another of his major posts — clearing the way for him to stay for a third term, and maybe longer, as the concurrent head of the party, state and military.

Mr. Xi’s predecessor, Hu Jintao, stepped down from all those top posts after one decade. The leader before Mr. Hu, Jiang Zemin, was general secretary for 13 years, and then stayed on solely as chairman of the Chinese military for a further 22 months.

“Xi has spent his current term laying the groundwork for a major win at the 20th Party Congress,” Christopher K. Johnson, a senior fellow at the Asia Society’s Center for China Analysis, wrote in a recent assessment. “Xi’s third-term gambit leaves him in a much stronger position to dictate outcomes than his two immediate predecessors.”

Even if Mr. Xi, 69, is assured of another term, he faces a big test of his ambitions at the congress: To what extent will he try to fill the next leadership lineup with his favored officials? Above all, there is the question of whether Mr. Xi will signal a preferred successor or delay that decision until later.

So far, no political heir has emerged, and many experts think that Mr. Xi will hold off from confirming one at this congress, so that he can preserve his influence for years to come.

The year leading up to the congress has been rocky for China, in spite of Mr. Xi’s calls for stability. The turbulence has inspired speculation that he has been weakened, which could leave his draconian policies vulnerable to challenge from rivals.

Mr. Xi has insisted that China must stick to its “zero Covid” policy to minimize coronavirus deaths and protect the economy, but shutdowns of cities hit by outbreaks have dragged growth down and frustrated residents. China appears unlikely to reach the goal of 5.5 percent economic growth for 2022 that leaders laid down earlier this year, and unemployment among urban residents aged 16 to 24 rose to 20 percent in July.

Mr. Xi has also stood firmly by Russia, despite President Vladimir V. Putin’s invasion of Ukraine. Some Chinese analysts have suggested that Mr. Xi leaned too close to Mr. Putin by offering a friendship with “no limits” that needlessly antagonized Washington and its European allies.

The current premier, Li Keqiang, has sometimes struck a milder, more pragmatic tone than Mr. Xi. During a visit this month to Shenzhen, a commercial city long at the forefront of China’s market reforms, Mr. Li told a crowd of residents that “reform and opening must forge forward.”

But despite their differences, Mr. Li appears to have little power to challenge Mr. Xi’s policies, like “zero Covid.” Mr. Li must soon step down as premier under constitutional rules, and Mr. Xi’s big reservoir of power appears likely to insulate him from serious setbacks at the congress.

Last year, the party issued a resolution on its century in existence that was mostly a paean to Mr. Xi. He also controls the military and the domestic security apparatus; both are crucial anchors of power, and they have become increasingly dominated by officials promoted by Mr. Xi.

“I think Xi has more or less weathered the storm. State media is clearly preparing the ground for his third term,” said Trey McArver, a political analyst with Trivium China, a company that monitors Chinese policymaking.

Even so, Mr. McArver said, Mr. Xi is likely to reach beyond his own longstanding underlings and also promote officials who have demonstrated their loyalty and worth. “Part of his success over the past decade has been his ability to win support and bring people along,” Mr. McArver said.

To judge from Mr. Xi’s recent speeches and comments, his keynote report to the party congress is likely to emphasize that China must put greater emphasis on national security and reduce inequality in the name of “common prosperity.”

“Chinese-style modernization is modernization through common prosperity of the entire people,” Mr. Xi said in a recent visit to Liaoning, a province in northeast China that has struggled with industrial decline and a fast-aging population.

The full shape of China’s next leadership will not become clear until March, when the National People’s Congress — an annual legislative gathering separate from the party’s congress — is likely to be held. There, rubber-stamp legislators will vote in the new premier and other senior government officials, including a foreign minister and a team of senior economic policymakers. Mr. Xi is also likely to receive a new term as state president at that session.

Some analysts have speculated that Mr. Xi may put a loyalist provincial official into the premier’s job, succeeding Mr. Li. But precedent suggests that the next premier may be Hu Chunhua, a 59-year-old vice premier, or Wang Yang, 67, who is head of the Chinese People’s Political Consultative Conference, an advisory council. Neither Mr. Hu nor Mr. Wang was especially close to Mr. Xi before joining the central leadership, but both have cast themselves as loyal lieutenants with experience running central administration.

“Only Wang and Hu have the requisite résumé,” said Mr. McArver, the analyst, “and Wang is clearly the more senior of the two, so we think Wang’s chances are much better.”