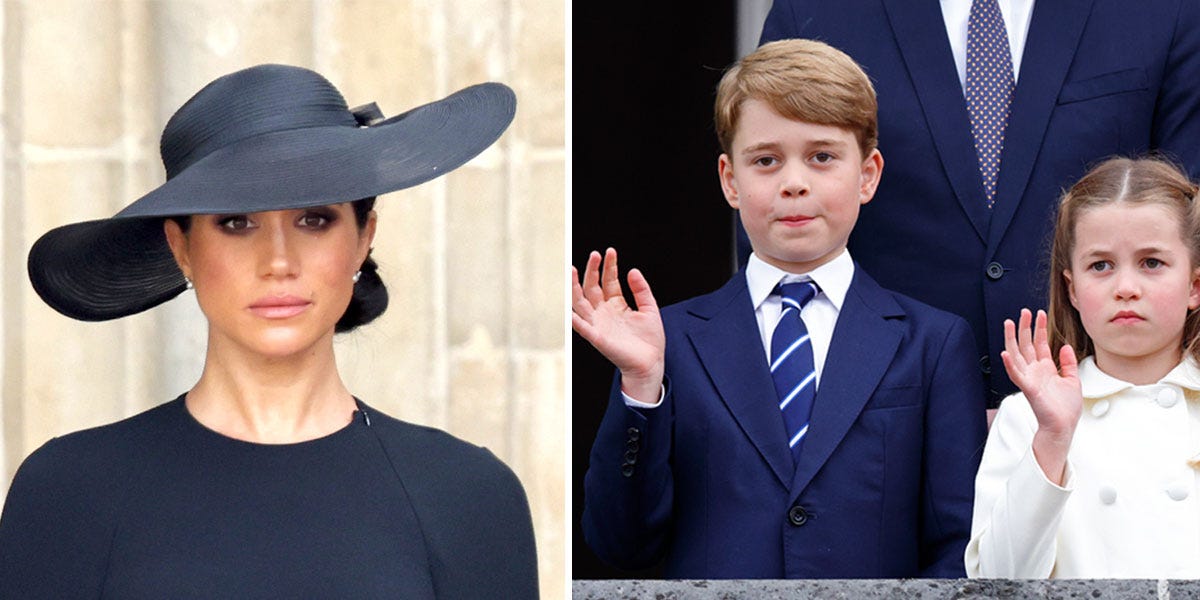 From the moment the news broke that she was dating Prince Harry, Meghan Markle has been a fixture on the headlines and covers of British tabloids.

The scrutiny hasn’t stopped since the couple moved to Montecito, California, two years ago. But royal expert Kristen Meinzer told Insider she doesn’t believe it will last forever.

“The tabloids really love raking Meghan over the coals,” Meinzer said. “But their appetite for her may start to go away as William’s children get older, as the next generation of kids come up.”

“So much of the interest in the royals gets hyper-focused when they’re teenagers, in their 20s, and in their 30s,” she added. “It’s much like Hollywood.”

Meinzer noted that Prince William was portrayed as a “teen dream sex symbol” in the ’90s — and not just in the UK. When he was 14 in July 1996, William landed on the cover of People alongside a headline calling him “Britain’s newest heartthrob” with “plenty of ladies in waiting.” An early 2000s issue of NW Magazine — an Australian publication — shows a teen Prince William on the cover as rumors swirled that he could be dating Britney Spears.

Prince Harry — and his many scandals — also became tabloid fodder as he fought with paparazzi and played a game of strip poker in Las Vegas.

“William and Harry, we paid a little bit of attention to them as Diana’s children, but we mostly cared about Diana,” Meinzer said. “It wasn’t until they got older and we started thinking, ‘Oh, Prince Charming,’ that the public interest really started to peak. People could imagine dating them, marrying them, or starting a life with them.”

Meinzer does believe the British tabloids will continue to keep a distance from reporting on the personal lives of Prince George, Princess Charlotte, and Prince Louis — who are 9, 7, and 4, respectively — and making them the focus of headlines, at least for now.

“After Diana died there was a certain level of respect for William and Harry for a few years,” Meinzer said. “There was an understanding that the press was not going to be hiding in bushes at St. Andrews while William was there — they will keep their distance and give him some respect.”

“I think that they’re going to do the same thing for William’s children too, but I don’t think that’s going to stop them from publishing stories,” she added. “We knew about Kate 20 years ago. When they were university students, there was still stuff coming out about them, but it wasn’t at the feverish level that it was with Diana.”

Meghan is no stranger to the “feverish level” of the British tabloids. A Daily Mail headline once claimed her favorite snack, avocado toast, was “fueling human rights abuses, drought, and murder.” On the day before she married Prince Harry, The Sun ran a headline claiming she was related to a serial killer. Many pointed out that the press used Kate Middleton’s most recent birthday as an opportunity to criticize Meghan. And recent headlines amid Queen Elizabeth II’s funeral highlight how Meghan is treated completely different from Camilla, Queen Consort.

Before she stepped down from the royal family, Meghan sued Associated Newspapers — which owns the Daily Mail and the Mail on Sunday — and accused the company of running a three-year campaign of fabricated stories against her. She won the legal battle in 2021. That same year, Meghan said tabloids should come with a “warning label like cigarettes do.” She also told Oprah Winfrey that the constant negative press coverage caused her to have suicidal thoughts.

“The press always likes to choose their favorites, they like to choose their villains,” Meinzer told Insider. “They choose their sides and they’ve definitely made Meghan the villain of the moment. Sometimes that moment lasts for years. Hopefully it won’t last for decades.”

Meinzer is “really curious” to see how things will change in the next five to seven years as Prince George, Princess Charlotte, and Prince Louis grow up.

“Maybe the tabloids won’t be so interested in Meghan anymore,” Meinzer said. “We do have, unfortunately, a very specific and ageist appetite for public figures in our world.”

“We’ve seen this across all entertainment industries,” she added. “And yes, the royals — to a certain extent — are entertainment.”