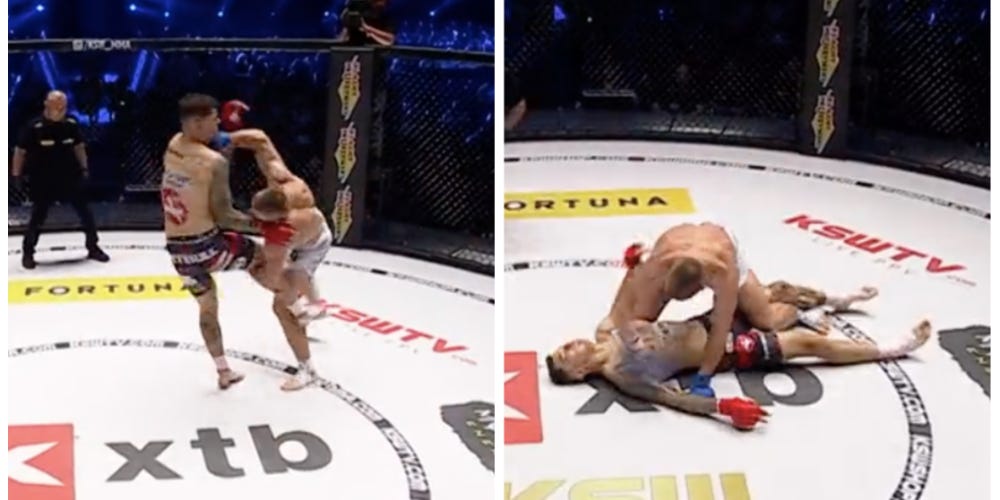 An MMA fighter nicknamed “Pitbull” scored a knockout that was so quick that the round clock didn’t even have a chance to flash on the screen during the broadcast.

Ukraine light heavyweight Bogdan Gnidko competed in the eighth pro fight of his career at the KSW 73 nine-bout card that took place at Cos Torwar in Warsaw, Poland.

Competing against Polish fighter Damian Piwowarczyk midway through the event, Gnidko had one of those “blink and you’ll miss it” moments as he finished his opponent with the very first strike he threw — a counter punch.

Piwowarczyk didn’t know what hit him, as he was attempting to uncork a kick of his own but got unstuck split-seconds later.

He was on the deck, and completely out of it, after a matter of seconds.

It all happened so fast that the referee had barely taken a step toward the center of the cage, and had to leap into action as Gnidko began wailing shots onto Piwowarczyk, who was defenseless and unconscious on the floor.

The official result was a five-second finish — the fastest knockout in European fight firm KSW’s history.

And you can watch it right here:

Jorge Masvidal famously finished Ben Askren with a flying knee in a UFC match in 2019 — the fastest knockout in UFC history.

But Uly Diaz one-upped both Gnidko and Masvidal when he scored a three-second knockout in a Bare Knuckle Fighting Championship bout in 2020.