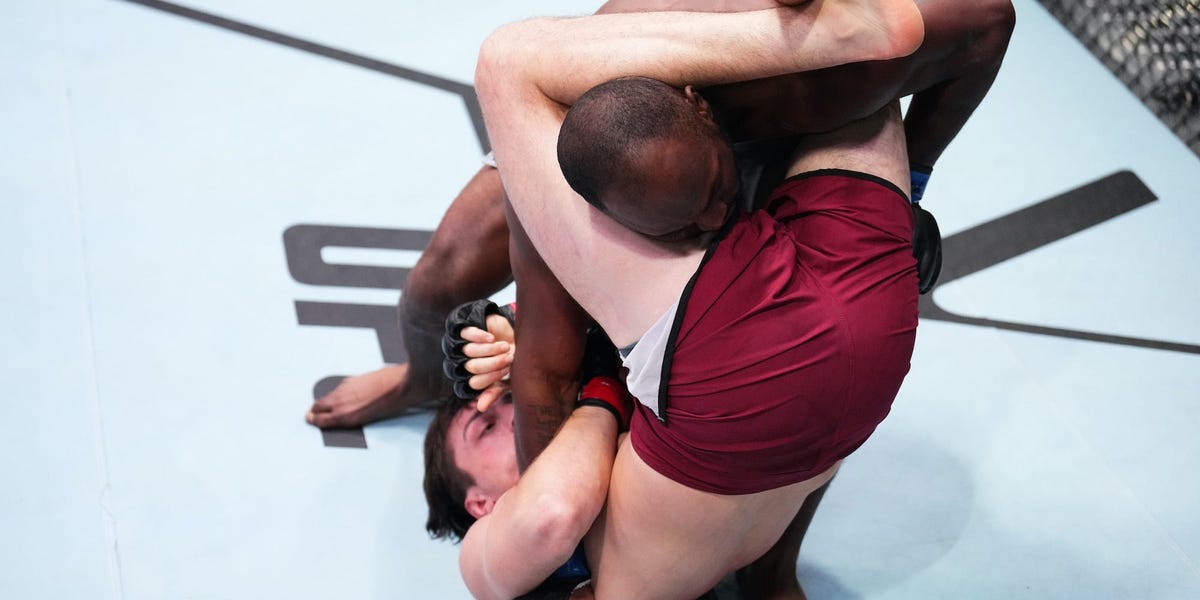 LAS VEGAS — Darrius Flowers scored one of the most conclusive wins during Tuesday’s episode of Dana White’s Contender Series as he got a hold of Amiran Gogoladze and slammed him to the ground to force a gnarly stoppage win.

Insider was Octagonside for the Apex show and heard VIP fans scream “Tombstone Piledriver,” as the impact of the maneuver could be felt around the TV studio in Las Vegas.

Though it is officially registered as a slam, it had an uncanny resemblance to one of The Undertaker’s signature moves from WWE.

The move was used as an iconic finisher for the Undertaker for decades of action in the sports entertainment arena.

For Flowers, it proved just as effective as Gogoladze was in no fit state to continue and promptly tapped out.

He was done — likely because of a dislocated shoulder.

‘Me and Dana are about to make a lot of money,’ Flowers said

With the win, Flowers advanced his pro MMA record 12 victories (eight knockouts, one submission, and three decisions) against five losses.

He then gave an animated post-fight victory speech to Laura Sanko, saying that he’d been watching every season of the Contender Series and so it felt surreal that he had now scored a win on the show.

“I can’t do anything but thank God,” said Flowers. “Look at that finish, it was Jesus Christ himself.”

“America, stand up, get behind your people! UFC, let’s go!” Flowers added. “It sounds cliché, but hard work pays off. I wanted that body slam knockout.

“Me and Dana White are about to make a lot of money together,” he finished.

White did not need much convincing to offer Flowers an instant contract to fight in the UFC after his impressive Contender Series showing.

Announcing his decision, White said: “I was in the back and he walked out to the cage and yelled at the matchmakers: ‘Where’s Dana? Where’s he at?’

“So, I came out, and said: ‘I’m here.’ You know what he said to me? ‘Nobody stands between me and my dream. I’m going to smash this dude.’

“He’s telling me everything he’s going to do to this kid, and he came out and did it.”

White then told Flowers that he was getting promoted to the UFC.

When Flowers addressed the combat sports media following his win, he said he’d happily talk to the WWE about transitioning to pro wrestling once he’s done competing in the UFC.

One reporter asked him if he’s a fan of The Undertaker. “No,” Flowers said. “I’m a ‘Stone Cold’ Steve Austin fan, WWF days.”

He continued: “I’m not with the WWE, no disrespect, but if you guys want to hire me after I’m done with the UFC, go ahead, we’ll have fun together and make some money.”

It is unclear when, exactly, Flowers will fight for the first time under the UFC banner.

Dana White’s Contender Series returns Tuesday, August 30 for the sixth episode of the sixth season. The season wraps on September 27.