A million people descended on London for the Queen’s funeral. Like me, they never got close — but they were still a part of history. 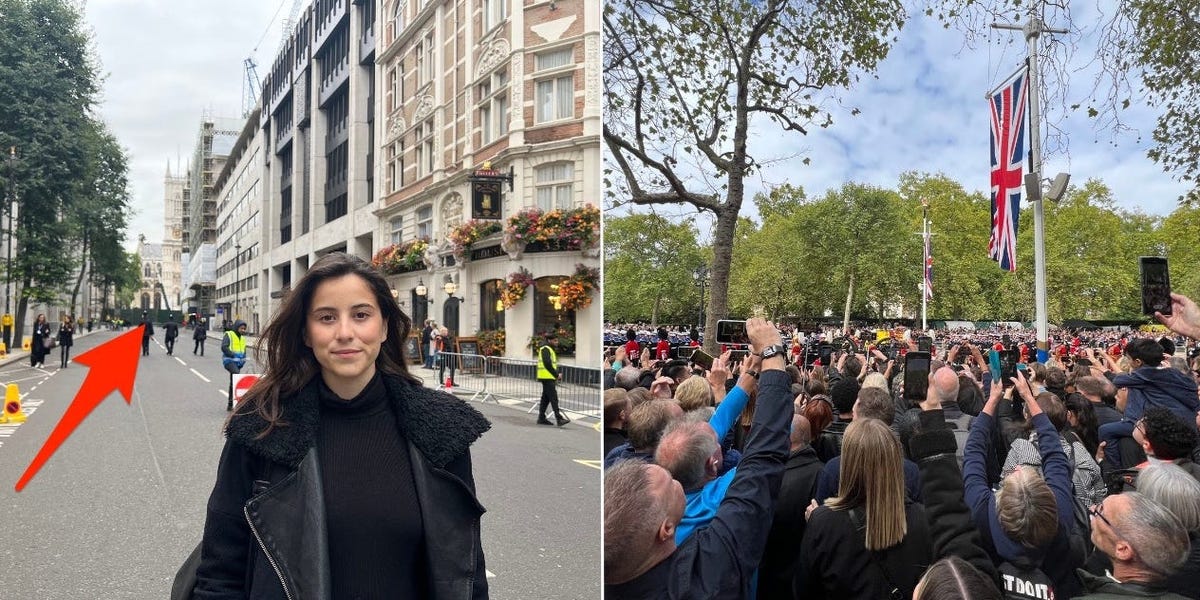 VIP guests like President Joe Biden and Canadian Prime Minister Justin Trudeau were among 2,000 people who actually attended the funeral.

I opted to go to The Mall, a road connected to Buckingham Palace. As I arrived, thousands were already lined up. Soon after, the funeral began playing on speakers.

Chances of getting close to the barrier were slim given just how many people had come to London for the funeral. More than a million were expected to be there, which made the funeral for Queen Elizabeth II the biggest police operation to ever take place in the UK, Wired reported.

But even though I was among those who weren’t able to see the inside of Westminster Abbey, it still felt like we were part of a moment in history, especially when the funeral service began playing on large speakers placed throughout The Mall. The crowd largely fell silent to listen.

At The Mall, I also saw some who looked like they’d been waiting for hours, and others – like these people carrying suitcases – who appeared to have casually strolled by.

Having only been there for a few hours at this point, I sympathized massively with anyone taking their opportunity to lie down on the grass. From conversations I had later in the day, I came to understand that some well-wishers had arrived overnight to pay tribute to the Queen at her funeral.

Given how many people had gathered for the occasion, there was a massive police and armed forces presence.

Amid members of the public, there were soldiers wearing military uniforms, policemen, and security staff attempting to ensure that spectating the Queen’s funeral went off without a hiccup.

Atkinson, who said she headed to camp outside for the funeral at 9 p.m on Sunday, said she also owns the world’s largest collection of royal memorabilia — made up of 12,777 pieces.

After the funeral ended, everyone did their best to get into a good viewing spot to view the procession of soldiers, royals, and the Queen’s coffin draped in the royal standard.

A crowd of people I passed making my way to Buckingham Palace thought that standing among the trees would help them get a better view of the procession, which took place once the funeral ended.

Five hours later, the Queen’s funeral procession crossed The Mall. Everyone around me, people of all generations, did their best to capture a moment in history.

Sure, the majority of people who were at The Mall didn’t get the perfect shot of the funeral procession or the royal family. But with everyone I spoke to, it seemed that wasn’t the reason they were there in the first place.

Together, with their smartphones out, a million people experienced a moment in history collectively – one that I’m sure they, and I, will never forget.