A couple hosted a joyful 4-day Scottish-Indian wedding to celebrate their cultures with a Haldi ceremony, bagpipes, and haggis pakoras 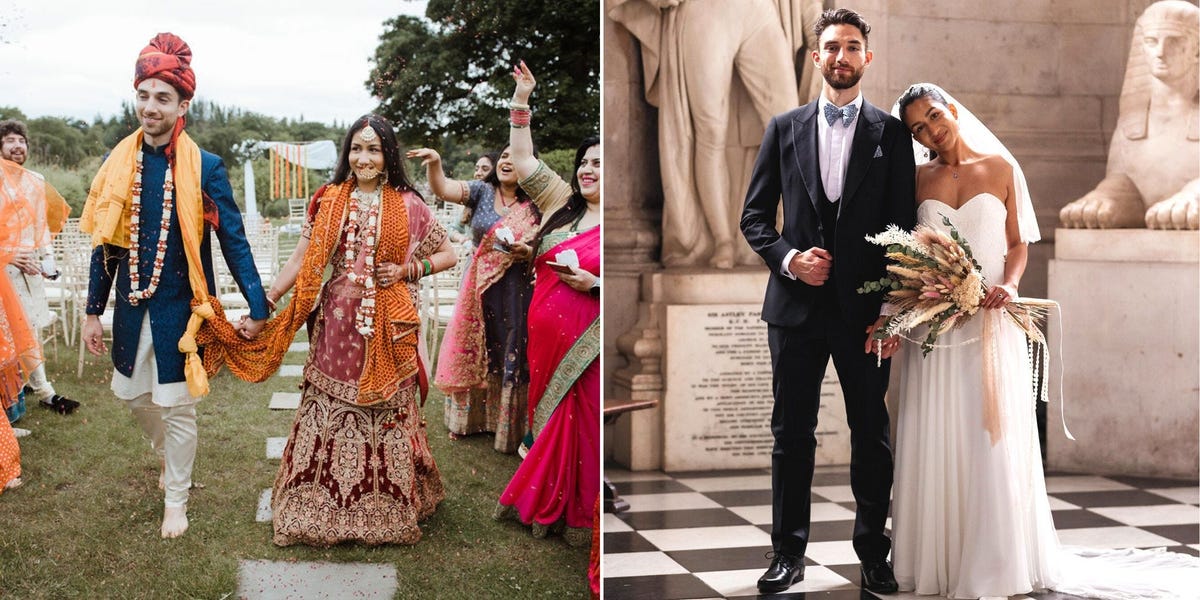 A Scottish groom and an Indian bride planned their own multi-event wedding in June that celebrated the best parts of their two cultures.

Alastair Spray, a 28-year-old researcher, and Angie Tiwari, a 30-year-old sales director who also works as a yoga and meditation coach in London, told Insider they noticed a lot of similarities between Scottish and Indian culture and hoped to bring that out during their vibrant wedding.

“From the moment we met and we started dating, Alastair has been aware that my culture is very important to me,” said Tiwari, a British-Indian who observes Hinduism.

She added that since meeting Spray on Hinge in 2018 and becoming engaged in 2021, she has introduced him to yoga, taught him how to do the Gāyatrī Mantra (ancient chanting), and brought him to celebrate Diwali with her family. The couple also conducted a pujā blessing before moving into their shared London home in 2020.

“Scotland also has a very proud and unique culture and I was very excited to share that with Angie,” said Spray. He added that they’ve attended cèilidh nights – Scottish gatherings with music and dance – in London, and he has shown her around Glasgow, Edinburgh, the Scottish Highlands, and his hometown, Dunblane.

The couple wove many Scottish and Indian touches into their £25,000, or around $28,000, wedding celebrations that took place over a four-day period in London and Scotland.

On June 18, a Saturday, the couple had their official wedding ceremony among 150 family members and friends at the chapel beneath St Paul’s Cathedral, London. They were able to get married at the exclusive venue because Spray’s father holds a Member of the Most Excellent Order of the British Empire (MBE), an honor awarded by the Queen, that made them eligible to marry there.

“At St. Pauls, we had one biblical reading that was read by Alistair’s aunt, and we were really amazed that our priest said we could have a reading from one of the ancient Hindu scriptures,” said Tiwari, adding that her uncle read from the Bhagavad Gita. They also selected five hymns, enjoying aspects of Hinduism and Christianity side by side.

Spray opted for a classic black-tie suit from Suit Supply while Tiwari wore a £195, or around $220, white lace corset dress and veil from a charity shop. Her “something blue” was a simple silver necklace with a baby-blue pendant that once belonged to Spray’s late grandmother, Tiwari said.

Meanwhile, her family brought touches of Indian fashion to the day. “My mom actually wore the sari that she wore on her wedding day,” Tiwari said of the pink-and-purple garment.

They then had an intimate meal at a low-key Indian restaurant before returning to their home for a mehndi (henna) party.

After traveling to Scotland, the couple undertook Indian wedding rituals

The next day, the wedding party traveled to Scotland where Spray and Tiwari said they hired a barn and converted granary in the Scottish countryside that doubled as accommodation for their guests.

On Monday, the couple awoke to rare sunny weather in Scotland and performed Hindu rituals outside. Tiwari wore the yellow sari that her mom wore to her own Haldi ceremony, a blessing where the bride and groom are covered with turmeric. Tiwari said her uncle led the ceremony and her aunt explained the ritual, while the family came up and put sandalwood paste containing haldi on them.

Tiwari added that her family are from North India’s Kumaoni tribe, who she said wear a distinctive orange-and-yellow scarf with red dots on it, known as a pichora. The couple sat beneath this during the ceremony.

This was followed by a sangeet — a pre-wedding celebration with music and dancing that saw 25 of their loved ones gather and perform Indian dances to Hindi songs and Scottish dances to cèilidh music. “It was a really great blend of both of our cultures and exactly what we wanted,” said Tiwari.

The couple’s final celebration took place that Tuesday, and included the Hindu religious ceremony which comprises many steps. The couple chose a Pandit, or Hindu priest, who explained the rituals in English as the service unfolded, so guests knew what was happening at each stage.

Spray opted for traditional Indian outfits. “I was wearing this really beautiful blue sherwani, which we’d ordered from India and I got matching gold-and-cream sherwanis for my groomsmen,” he said.

He added that some friends surprised him by wearing kurtas, and later changing into kilts: “It was really nice touch that just all of my friends fully embraced it,” he said. Meanwhile, Tiwari said she wore a traditional red lehenga before changing into a pink sharara for the reception.

Tiwari said they found a musical duo called Dhol and Pipes – a South Asian man playing the dhol drum and a Scottish man who plays bagpipes. She said their popularity was “a sign of how many South Asian and Scottish people are getting married.”

Other nods to their multicultural union included haggis pakoras made by a local Perth restaurant called Tabla, and a speech that Spray gave in Hindi, much to the surprise of his new wife.

Even the couple’s first dance nodded to their unique journey, they said. It began with Elvis Presley’s “Can’t Help Falling in Love with You,” and ended with “Koi Mil Gaya,” an iconic song in the Bollywood film “Kuch Kuch Hota Hai,” which they said was the first Bollywood film they ever watched together.