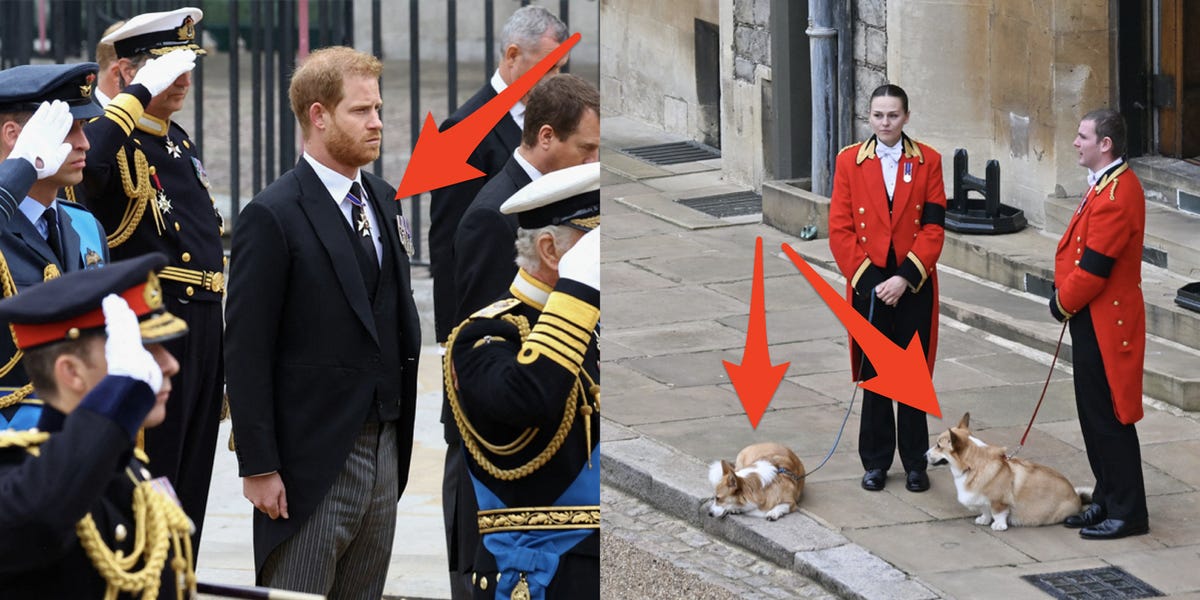 The funeral was held in the same location as the Queen's wedding and coronation.

Then Princess Elizabeth married Prince Philip at Westminster Abbey in 1947.

Later, in 1953 she was coronated at the church following the death of her father the year prior.

Westminster Abbey is also the church where Prince William married Kate Middleton in 2011.

A memorial service for Prince Philip was held in the church in March, about a year after his death. But Queen Elizabeth II's is the first royal funeral to be held at Westminster since the 18th century, and the first state funeral since Winston Churchill in 1965.

The funeral plans have been in the works for 20 years.

Edward Fitzalan-Howard, the 18th Duke of Norfolk, has been planning the Queen's funeral for the past 20 years.

In addition to being a duke, Fitzalan-Howard is the earl marshal of England, which puts him in charge of planning the state opening of Parliament, royal state funerals, and the coronations of new monarchs.

"I am determined not to charge the state a penny for my work as earl marshal," he told The Times.

The Queen's coffin was carried on the same carriage as her father's.

The Queen's coffin was transported on the State Gun Carriage of the Royal Navy from Westminster Hall to Westminster Abbey for the state funeral service.

The carriage, drawn by 142 sailors instead of horses, has been used for the funerals of other monarchs. The tradition started after horses pulling Queen Victoria's coffin were spooked during the procession.

The coffins of Edward VII, George V, and George VI were all carried on the carriage. It was also used for the funeral of Winston Churchill.

The coffin was covered in symbolic items.

On top of the Royal Standard flag draped over the coffin were the Imperial State Crown, the Sovereign Scepter, and the Sovereign's Orb.

According to the Washington Post, the crown was made for the Queen's father, the scepter represents a monarch's power in the secular realm, and the orb represents her power in the Christian world.

King Charles III requested a special wreath for his mother's coffin complete with a special note.

Along with the crown, scepter, and orb, there was a wreath resting on the Queen's coffin.

According to a tweet from the Royal Family's official account, the flowers were chosen by King Charles III and had their own symbolism: "The wreath contains foliage of Rosemary, English Oak and Myrtle (cut from a plant grown from Myrtle in The Queen's wedding bouquet) and flowers, in shades of gold, pink and deep burgundy, with touches of white, cut from the gardens of Royal Residences."

Later on, a handwritten card from her son, the new king, was placed on the coffin. The card read, "In loving and devoted memory. Charles R."

Prince Harry couldn't wear his military uniform to the funeral.

Harry forfeited his military titles when he chose to step back from the royal family in 2020.

Earlier in the week, a spokesperson for the Duke of Sussex told Insider that Harry would wear a "morning suit throughout events honouring his grandmother." Most of the other senior royals wore military uniforms for the events.

On Friday, "at the King's request," per People, Harry was allowed to wear his military uniform for the grandchildren's vigil on Saturday. But the uniform was stripped of the Queen's initials, "ER" (Elizabeth Regina).

Harry still wasn't allowed to wear the uniform for the funeral.

Prince Andrew, whose royal and military titles were stripped amid sex-assault allegations, was also permitted to wear a military uniform without the Queen's initials for vigils. But he wore a morning suit for the funeral.

Harry also wasn't allowed to salute the Queen at the funeral.

Since he was stripped of his military titles, Harry also wasn't allowed to salute the Queen's coffin with his brother, aunts, and uncles during the funeral procession.

Senior royals have been processing behind and keeping vigil at the Queen's coffin for the past week, but two new faces joined the procession at Westminster Abbey.

Prince George, 9, and Princess Charlotte, 7, Prince William's children, were reportedly the only great-grandchildren in attendance.

The Prince and Princess of Wales' youngest son, Prince Louis, 4, was not in the Order of Service for the funeral.

Meghan Markle entered the Abbey with Kate Middleton and her children.

Although the relationship between Meghan and Kate has been tense since Harry and Meghan stepped back from the royal family, they have been reunited several times since the Queen's death.

Prince William and Prince Harry walked behind the Queen's coffin as it was moved from Westminster Hall to Westminster Abbey. But Kate (along with Prince George and Princess Charlotte) and Meghan arrived in two separate cars and gathered together before the funeral.

This was the first time Meghan has been seen with her niece and nephew since stepping back from her title.

Harry and Meghan sat in the second row during the funeral services.

During the funeral services, King Charles and his wife Queen Consort Camilla, Princess Anne and her husband Sir Tim Laurence, and Prince Edward and his wife Sophie were all sitting in the front row, along with William, Kate, and their children.

Even Prince Andrew and Princess Anne's children, Peter Philips and Zara (who aren't working royals) were in the front row.

Harry and Meghan, however, were relegated to the second row with cousins Beatrice and Eugenie and Prince Andrew's ex-wife Sarah, Duchess of York.

A bishop dropped a piece of paper near the Queen's coffin.

People watching and following the funeral services online noticed a bishop drop a piece of paper that landed near the Queen's coffin.

Tweets dubbed the incident "papergate" and made jokes about it becoming its own Netflix show.

The funeral hymns symbolized different parts of the Queen's life.

At the service, various hymns that were significant to the Queen were sung.

One of the hymns, "The day thou gavest, Lord, is ended; The Lord's my shepherd" was sung at the Queen's wedding in 1947.

The hymn "Love divine, all loves excelling" was also sung at William and Kate's wedding in 2011.

Two hymns were also specially composed for the service.

US President Joe Biden and First Lady Dr. Jill Biden came to pay their respects to the Queen.

According to Politico, only current heads of state and their spouses or partners were invited to the funeral. CNN also reported that officials from Russia, Belarus, and Myanmar weren't invited.

President Biden arrived in the Beast.

The US president and his wife were the only world leaders who were allowed to arrive to the Queen's funeral in a private vehicle.

They drove to Westminster in the Beast, the president's fortified limousine, along with a six-vehicle motorcade.

The rest of the leaders arrived at the services on buses.

Along with leaders from around the world, "Killing Eve" star Sandra Oh was one of the several celebrities present at the Queen's funeral.

The actor was named part of the Order of Canada earlier this year, and she was part of a special delegation Trudeau gathered to attend the funeral

Kate wore jewelry in honor of the Queen.

The Princess of Wales wore a pearl-and-diamond necklace that once belonged to Queen Elizabeth II for the funeral.

Charlotte also paid tribute to the Queen with her jewelry.

Charlotte wore her first significant piece of jewelry to her great-grandmother's funeral.

It was a small diamond broach shaped like a horseshoe, and according to jewelry historian Lauren Kiehna, it was likely a tribute to Queen Elizabeth II's love of horses.

According to People, the broach was also a gift from the Queen.

Meghan's earrings were gifted to her by the Queen.

The pearl-and-diamond drop earrings Meghan wore for the funeral were reportedly a gift from the Queen's personal collection.

The duchess was gifted the earrings during her first solo outing with the Queen in 2018.

Queen Consort Camilla also honored the Queen with an accessory.

She wore the same piece of jewelry to Queen Elizabeth II's diamond jubilee celebrations in 2012.

The Queen helped design her hearse.

Before her death, Queen Elizabeth II approved the designs of the State Hearse that would carry her coffin.

It was designed by the Royal Household and Jaguar Land Rover.

The finish on the hearse is Royal Claret, which is the same color as other royal and state vehicles. The vehicle is also adorned with the Queen's personal royal cipher.

The Queen spent a lot of her life in Windsor Castle.

After the funeral, the coffin progressed to Wellington Arch, where it was transferred to the State Hearse to be taken to Windsor Castle.

The castle has housed 40 monarchs for almost 1,000 years. It's where the Queen lived to escape bombings in London in World War II, and during the pandemic, she made the castle her permanent home.

The Queen's beloved corgis waited for the procession to St. George's Chapel.

The Queen's beloved corgis were waiting for the procession at Windsor Castle.

Photos show the Queen's two remaining corgis, Muick and Sandy, waiting outside the castle when the hearse arrived.

According to BBC, Prince Andrew will be adopting his mother's corgis.

One of the Queen's favorite horses, Emma, was also waiting outside the castle with trainer Terry Pendry, who often rode with the Queen.

The committal service was held at St. George's Chapel, where Harry and Meghan were married.

After a procession via the Long Walk, the coffin was brought into St George's Chapel for a smaller committal ceremony.

Prince Philip's funeral took place in the chapel, and it's also where Harry and Meghan were married in 2019.

The committal service signified the end of the Queen's reign.

During the committal service at St. George's Chapel, the Crown Jeweller removed the crown, orb, and scepter from the top of the coffin, signifying the official end of Queen Elizabeth II's reign.

King Charles III then placed the Queen's company camp color of the Grenadier Guards flag on the coffin before the Lord Chamberlain Baron Parker "broke" his wand of office and placed it on top to signal the end of the guards' service to the Queen.

This was the first time the "breaking of the wand" was televised.

The royal piper concluded the committal service at the request of the Queen.

The Queen's piper, Pipe Major Paul Burns of Scotland, played a lament at the end of the committal service.

Burns woke the Queen up at Balmoral every day since 2021, and prior to her death, she reportedly asked that he play at her funeral.

The Queen's coffin was temporarily lowered into a royal vault, but she'll be buried next to her husband.

The Queen's coffin was lowered into a royal vault at the end of the committal service. But at a private burial later in the evening, the Queen will be interred in the King George VI memorial chapel.

Although Prince Philip was previously buried in the royal vault at Windsor Castle, he will be moved next to the Queen following her burial.