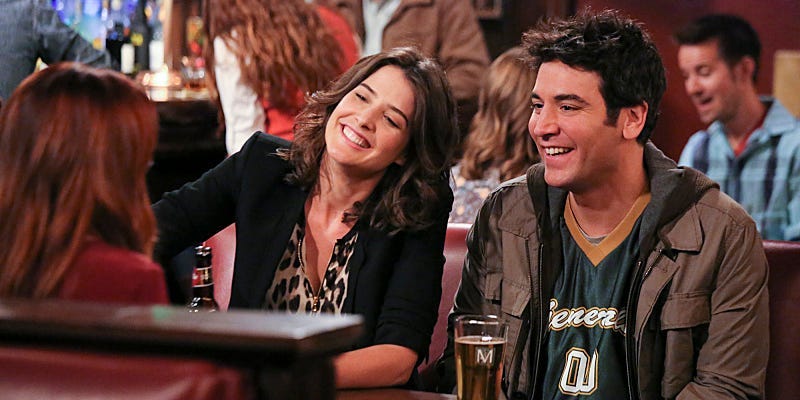 The narrator, who was supposed to be an older Ted Mosby, was voiced by Bob Saget.

Josh Radnor played Ted on the CBS show, but the late Bob Saget was cast to do the "future Ted" voice-overs that narrated the series.

New York City may be a central character in the series, but according to the New York Post, they really filmed on a studio lot in Los Angeles that was designed to look like the Big Apple.

Before Neil Patrick Harris landed the role, Jim Parsons auditioned for Barney on the show. But there are no hard feelings from the "The Big Bang Theory" star.

"Look, it all worked out fine … Neil's better for the part, let's be honest," Parsons said on a 2015 episode of "Live With Kelly," according to Yahoo.

Real-life Canadian Cobie Smulders eventually snagged the part of Robin, but only after Jennifer Love Hewitt turned it down.

According to E! News, cocreator Craig Thomas wrote on Reddit that Love Hewitt decided to do CBS' "The Ghost Whisperer" instead of "HIMYM."

The pop singer guest-starred as Abby the receptionist on season three, episode 13. According to E! News, cocreator Carter Bays told Reddit that she helped bring in new viewers and saved the show from low ratings.

"By golly she put our show on the map. It can't be overstated," Bays wrote. "Britney Spears rescued us from ever being on the [renewal] bubble again. Thanks Britney!"

The show's creators are in a real-life band, and they wrote and performed the series' theme song.

The theme song of "HIMYM" is known for its infectiously catchy tune, and it turns out the show's creators had a big hand in creating it.

The song, "Hey Beautiful," is by the band The Solids, which Bays and Carter are both members of. Bays does vocals and guitar, and Thomas plays the drums.

A real proposal happened during the filming of the show.

According to the New York Daily News, Jana Rugan and Timothy Russo really got engaged on the season-two finale.

Russo's friend wrote for the series and arranged for the couple to stand in as extras since it was Rugan's favorite show.

On the episode, Robin and Ted were on a date when the waiter mistakenly brought Robin a champagne glass with a ring at the bottom. She freaked out — and so did Ted since he wasn't actually proposing — then Russo came over to claim the ring as his and proposed to Rugan for real.

"At first she thought I was messing up the scene, then it dawned on her and she started crying and everyone was clapping. It was awesome," Russo told the Daily News.

Some of the show's famous props went home with the lead actors.

In 2014, Bays and Thomas told Yahoo News that some of the show's iconic props ended up going home with the stars after the series ended.

Bays also ended up decorating his own home with the two swords that were hanging up in Ted and Marshall's apartment, and Thomas ended up taking a few set pieces from McLaren's, including one of the gang's red booths.

Harris made it his mission to get Barney and Robin together on the show.

Smulders was apprehensive when there were initial chats about the characters getting together, but Harris actively tried to make it happen throughout filming.

"I'd try to do little things in our scenes together where I gave her an extra look and an extra glance or would stare only at her during a whole scene just to see if anyone was noticing," Harris told The Fan Carpet of his own personal mission to get Barney and Robin together.

Ted probably made Barney sound worse on purpose to make himself look better in the end.

In 2018, Harris agreed with a popular fan theory in an interview with Digital Spy.

The theory speculated that Ted made Barney sound extra sleazy and womanizing in his story for his kids because he didn't want them to judge him for falling for Barney's ex-wife, Robin.

"I think that that's very accurate," Harris told Digital Spy. "Given the story structure, and with [Ted] telling the story to his kids, everything was able to be overdrawn."

Some of the leading actors' significant others made it onto the show.

Hannigan, who played Lily, also shared the screen with her husband, Alexis Denisof, who had a recurring role on the show as Robin's coanchor Sandy Rivers.

Smulders' husband Taran Killam was another spouse who made it onto "HIMYM."  He actually played two characters on the show, a one-time appearance as Derrick and the recurring character Gary Blauman.

Both Smulders and Hannigan had to hide pregnancies during filming.

"We have the biggest purses of any show on the air," director Pamela Fryman told the Chicago Tribune.

Hannigan wanted her daughter to play her on-screen child.

When Lily did end up having a child on the show, Hannigan's young daughter was set to play the role.

But, Hannigan told the HuffPost in 2017 that they decided she was too old for the part.

"They fired my kid from that role. She was gonna be the baby, but Carter Bays was like, 'Nope. She's too old,' and she got replaced," Hannigan said.

Harris' love for magic was added to Barney's character.

According to Entertainment Weekly, the actor has even written a children's book about magic, so it's clear that Harris influenced Barney's hobby.

You can buy the series-approved version of all of Barney's rules, and it's even "written" by Barney Stinson himself.

Most of the websites from the show are real too.

Her Campus reported that most of the websites the characters shout out on the series are actually live on the internet.

The characters' favorite bar was named after the cocreator's assistant.

Bays told TV Squad that his assistant, Carl McLaren, lent his name to the bar, McLaren's, and to its bartender, Carl.

The fictional bar is also based on a real establishment in New York City.

According to the New York Post, McLaren's is modeled after a pub in New York City called McGee's.

Bays and Thomas reportedly spent a lot of time in the real-life establishment when they were both writing for "The Late Show With David Letterman" earlier in their careers.

Some fans found out who the mother was on Facebook before they had a chance to watch the episode.

According to The Obsessive Viewer, the official "HIMYM" Facebook page posted a photo of the mother right after the episode that revealed her identity aired.

However, not every fan was able to watch the episode live, so they had the series-long plot point spoiled for them if they scrolled past the post.

Victoria would have been the mother if the show had been canceled early.

According to E! News, Bays told Reddit that a season-one cancellation would have resulted in them writing Victoria in as the mother.

Of course, the show actually went on for nine seasons, so that plan got scrapped.

The actors who played Ted's kids knew how the show was going to end for years.

According to CBS News, the final scene of Ted's kids learning that Ted still loved Robin was filmed in 2006 to ensure the actors playing the kids still looked the same.

That was only a year after the show premiered and eight years before the finale aired, so several precautions were taken to keep the ending a secret.

David Henrie and Lyndsy Fonseca, who played the kids, had to sign non-disclosure agreements, and only one camera operator was allowed in the room while they filmed the final scene.

There was almost a spin-off starring Greta Gerwig.

"How I Met Your Dad" was in the works after the "HIMYM" series finale, but it was ultimately scrapped in 2014 due to creative differences between the writers and CBS, according to Deadline.

The unaired pilot starred Greta Gerwig as Sally, a recent divorcée on the hunt for new love.

Over seven years after the "HIMYM" finale, a sequel series starring Hilary Duff premiered on Hulu.

After the failed "How I Met Your Dad" spin-off, Deadline reported in 2017 that a "How I Met Your Father" series was in development. But it took a few years to get it off the ground.

The Hulu sequel series stars Hilary Duff as Sophie, the leading Ted-like role, who is telling her son the story of how she met his father.